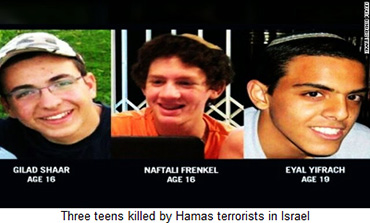 Consider this, if there had been a state of Israel in the 1930s, many more European Jews would have been able to escape the fate that consumed six million of them during the Nazi Holocaust during World War II.

That there is an Israel today explains when French and Ukrainian Jews are leaving their native countries and making Israel their new home. In mid-June, the Associated Press reported that "Increasing numbers of French Jews are leaving for Israel, citing dim economic prospects and a sense of being caught between an increasingly influential far right and militant Islam. More than 5,000 are on track to leave this year, the most since after the Six-Day War in 1967."

The chairman of the Jewish Agency, Natan Sharanky, speaking recently, noted that immigration to Israel from around the world had increased by 55%, with particular emphasis on those from France and Ukraine. The Jewish newswire service, Ynet, reported that "Never before has such a large proportion of a Western community made aliyah (return) in a single year."

If you were a French or Ukrainian Jew, you'd do the same thing if you could. In May, Three Jews, two of whom were Israelis, were murdered and one was wounded at the Jewish Museum in Brussels, Belgium. The suspect, profiled by French police, was a convict radicalized in prison and suspected of having joined Islamists in Syria to fight alongside them. A "disturbing reality" reported The Wall Street Journal is that "hundreds of Europeans have similar backgrounds."

Seeing the increase, Israel is planning to dedicate $29 million over the next two years to bring in new immigrants.

I don't see any difference between the Nazis of the 1930s and the Islamists of these years. The Nazis received a lot of support from the Arabs of their era. As for Islam, the Koran is filled with admonitions against Jews in particular and every other "infidel" in general. While there have been periods of tolerance for Jews over the past 1,400 years, the animus towards them has never been reduced and, in present times, we have seen a massive rejection of Christians as well. When Israel became a state in 1948, thousands of Jews from throughout the Middle East fled for their lives to settle there.

What history confirms is that a rise of anti-Semitism has been a signal of greater, wider troubles to come.

The Jewish Virtual Library, in its section on Zionism – the belief that Jews should have a nation-state of their own – notes that "In the late 19th century, the rise of anti-Semitism led to a resurgence of pogroms in Russia and Eastern Europe, shattering promises of equality and tolerance. This stimulated Jewish immigration to Palestine from Europe."

Moreover, Zionism does not discriminate against anyone. Israel's open and democratic character, and its scrupulous protection of the religious and political rights of Christians and Muslims, rebut the charge of exclusivity. Moreover, anyone – Jew or non-Jew, Israeli, American, or Chinese, black, white, or purple – can be a Zionist."

The rise of Islamism has given rise to much turmoil in the Middle East and in Africa. Nigeria is plagued by Boko Haram, an Islamist terrorist organization that is kidnapping girls and attacking Christian churches. The rise of the Islamic State of Syria and Iraq (ISIS) has evoked global concern for that can occur if it turns its attention to Turkey, Jordan, Saudi Arabia, and even Iran. Israel's defense forces have been on alert.

The kidnapping and killing of three teenagers, one of whom was an American, has provoked a number of military attacks to respond to Hamas, the Gaza-based terrorist organization that has "united" with the Palestinian Authority.

This has raised the question of why the U.S. should fund the Palestinian Authority. Currently the U.S. sends some $440 million annually in direct aid to the PA, plus an additional $225 million in funding through the U.N. This continues despite the fact that U.S. foreign appropriations bills expressly forbid funding for "assistance to Hamas or any entity effectively controlled by Hamas or any power-sharing government of which Hamas is a member." The U.N. remains a hotbed of antagonism toward Israel despite the fact that it is a member.

Despite the long record of accord and cooperation between the U.S. and Israel, support for Palestinian organizations defies justification given their unbroken record of refusal to agree to any peace with Israel, a nation that has been the only true ally the U.S. has had in the Middle East.

The discord in the Ukraine was accompanied by open antagonism for that nation's Jewish population. The events in France, Belgium, and in England as well, all suggest an anti-Semitism, long an element of life in these nations, is growing. Much of it is attributed to the growing Muslim populations in these and other European nations.

We all know the ultimate enemy of the West is Islam. The decision by thousands of European Jews to move to Israel is a signal of an increasing threat that should not be ignored.