Alan Caruba
What has happened to protests in America? 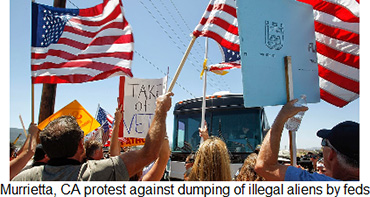 The U.S. began with protests that evolved into a full scale rebellion we call the Revolution. Throughout our history, there have been many protests and those against slavery evolved into the Civil War. War – whether for or against it – has been a prime generator of protests.

On the evenings of Monday, Tuesday, and Wednesday Megyn Kelly of Fox News interviewed Bill Ayers, the leader of the Weather Underground, a group he cofounded in 1969 as a self-described communist revolutionary group. These days he calls himself "a Communist with a small 'c'"

During the early 1970s the group engaged in bombings to protest the war in Vietnam. During the interview, Ayers insisted that he and others only bombed property and did not kill anyone, although at one point a group he described as breakaway was planning to kill officers, their wives and girlfriends attending a dance at a military base, but instead they were killed when their bombs went off in a New York townhouse. Neither Ayers nor his wife, Bernadine Dohrn ever served time for their bombings. Both entered academia. Ayers taught at the University of Illinois for many years.

As Jerome R. Corsi reported in his 2008 book, "The Obama Nation: Leftist Politics and the Cult of Personality," he noted that when Alice Palmer, an Illinois state senator decided to run for Congress, "she went out of her way to name Obama as her handpicked successor." Palmer was a dedicated Communist and admirer of the then-Soviet Union. In 1995, "To get Obama's state senate race off to a good start, Palmer arranged a function for a few influential liberals in the district, at the Hyde Park home of Weather Underground activists, Ayers and Dohrn."

Corsi wrote, "Palmer would never have introduced Obama to the Hyde Park political community at the Ayers-Dohrn home unless she saw an affinity between Ayers and Dohrn's radical leftist history, her own history of far-leftists politics, and the politics of Barack Obama." Ayers and Obama would serve together on the board of the Woods Fund for three years, beginning in 1999, the year Obama joined it.

Megyn Kelly did not explore the Obama-Ayers relationship. When he campaigned in 2008, it was brushed off as their just being "neighbors" in Hyde Park and it was pointed out that Obama was about eight years old when Ayers was bombing in the name of his leftist revolution. Between then and when he met Ayers in 1995 Obama had grown up in a family of far-leftists and had been mentored in Hawaii by Frank Marshall Davis, a card-carrying member of the Communist Party USA.

It did not surprise me to hear Bill Ayers say on Wednesday evening that he was not proud to be an American and did not consider it an exceptional nation. In both cases, he was reflecting the result of a recent Pew Research poll that indicated that self-described liberals expressed these views.

I recall the bombings of the 1970s. There were lots of them, along with massive marches in Washington, D.C. to protest the Vietnam War. I recall the Civil Rights movement that used marches and other non-violent means to achieve their goals. Earlier the suffrage movement and secured the vote for women. 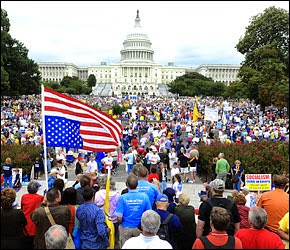 It strikes me that the present generation of both young and older Americans seem to be devoid of much, if any, rebellion against an intrusive government, except for expressions of it on their blogs and in their tweets. We surely do not need bombings, but only the protest against Obamacare in 2009 managed to evoke a significant turnout in Washington. D.C. Since its passage it has proven to be a nightmare for everyone.

Much has changed from the era of the 1970s and the resistance to the war in Vietnam. The wars that followed 9/11, first in Afghanistan and later in Iraq, did not evoke much protest. Initially they were popular. The first Iraq conflict, 1990-91, drove the Iraqis out of Kuwait and was so swift and successful that the troops were welcomed home with parades. The 2003 invasion, however, devolved into a sense of weariness as 4,500 casualties and over a trillion dollars seemed to achieve nothing substantive.

What was different? In the 1960s the leftist teachers unions had begun to exercise increasing control over the curriculums being taught. By 1979, Jimmy Carter signed off on a Department of Education that began operations in 1980. Earlier, conscription for military service was replaced by an all-volunteer military in the 1970s. Those of us that served prior to that understand the value of the draft and the service it required because it forged a bond between a man and his nation. These days, of course, it is a very different military with females, as well as openly gay members.

Throughout the 1980s and 1990s the economy was robust. The generations being born and coming of age received a relatively poor, but thoroughly liberal education regarding U.S. history and civics. On graduation they could focus on jobs, family, and "the good life." There was little to protest and even less initiative to do so. Even Bush 43's Iraq war generated little by way of an organized protest.

The 2008 financial crisis left no room for protest in the lives of Americans because the economy left millions unemployed and/or dependent on a government welfare program. It was a perfect time for Obama to suddenly emerge as a candidate for President. He had a celebrity's personality and he was black, affording generations of liberals the opportunity to fulfill the promise of equality that had begun in the 1960s. He promised "hope and change." He delivered years in which one scandal after another occurred.

Still, so many Americans devoted so little time to news of the Obama administration and received such a biased version of it from the mainstream media that they reelected him in 2012. That is indifference to the welfare of the nation. That is an apathetic approach to national politics. That is the failure to distinguish between character and celebrity.

It is a very different America today and one which is sharply divided between liberals and conservatives. It is an America being led by a President who has tossed aside the Constitution and announced his intention to govern with "a pen and a phone." Such an intention would have been greeted with a huge outcry of rage in the past.

The one issue that is evoking protests these days is illegal immigration and the protest in Murrieta, California that turned away buses filled with illegal aliens may lead to larger and more numerous protests to end this practice and reform immigration starting with more and higher walls on the southern border.

Today protest, except for signing a petition or participating on an Internet chatroom, is all that too many of today's Americans can manage to perform. We don't want to see a return to the bombings of the Ayers' era and we may not fill the streets, but it would be nice if more serious-minded Americans would show up to vote in the November midterm elections.