Alan Caruba
Should the government tell you what to eat? 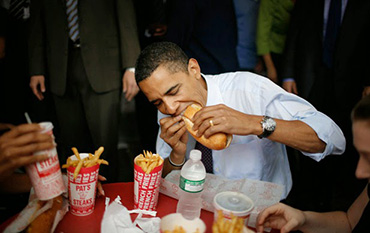 Given the successive scandals and monster laws like Obamacare that have been imposed on Americans, the federal government's efforts to control and determine what you eat doesn't receive the attention that it should. The ultimate question is whether the government should tell you what to eat and then seek to enforce their views about it? The answer is no.

The Dietary Guidelines Advisory Committee is one of those federal entities that should have no role in determining what is on your plate, but among its recommendations is the promotion of "a plant-based diet, reduced meat consumption, and only eating fish after reading up on which are good for you." Meanwhile the food police have been warning against the natural element of mercury in fish even though it is so small as to constitute no health threat.

Hanns Kuttner, a senior research fellow at the Hudson Institute, a Washington, D.C. domestic and foreign policy think tank, says that the working premise of the committee is that a "good diet would increase consumer's costs and imply the end of entire sectors of American agriculture – all in an effort to regulate behavior that has nothing to do with nutrition." The committee, since 2010, "has not included a member who has any knowledge of food production and food regulation."

The committee reflects the United Nations global campaign to encourage the consumption of insects. If you love dining on bugs, the UN wants this to be a part of everyone's diet. According to Eva Muller, the director of Food and Agricultural Organizations Forest Economics, Policy and Products Division, bugs "are nutritious, they have a lot of protein and are considered a delicacy in many countries."

It should come as no surprise that Michelle Obama is leading the food police at this point. A program of the U.S. Agriculture Department announced new rules in 2013 to remove high caloric food and drink items from cafeterias and campuses of schools around the country. As of this year, sodas, sports drinks, and candy bars are banned. Only diet drinks, granola bars, and fruit are acceptable.

This is Big Government at work, but no one expects that kids will go along, nor are shoppers likely to embrace a U.S. Department of Agriculture report that wants to steer them toward more fruits and vegetables and away from sugar and fat-laden items. The new guide was written for the 47 million Americans who participate in the food stamp program. Yes, 47 million!

Victor Skinner of the Education Action Group noted in early July that "The federal government's attempt to force public school students to eat 'healthier' lunches is falling apart at the seams." The New York Times News Service reported that the School Nutrition Association (SNA) which initially welcomed the bans is now lobbying Congress to dial back on the "overly prescriptive" and expensive changes.

"Congress is listening," reported the Times, "and is considering legislation to delay the nutrition regulations for a year, some of which have already gone into effect." The SNA is pointing out that many students are throwing away the additional fruits and vegetables included in their lunches, amounting to $684 million in food waste every year – or roughly "enough to serve complete reimbursable school lunches to more than 228 million students." Moreover, the "nutritious" federal lunch menu is also proving costly for many school districts that are now forced to purchase more expensive foods to comply with the regulations.

We have reached the point where some schools are banning birthday cakes or cupcakes in classrooms where such celebrations have gone on for decades. Meanwhile many parents have noticed that their children just skip lunch at school and wait to come home to eat instead.

For as long as I can remember Americans have been told that something they eat or drink is dangerous to their health, even though Americans now enjoy the highest life expectancy since such data has been studied. Almost everything we have been warned against has turned out to have some beneficial aspect to it.

In March, the journal, Annals of Internal Medicine published a study that concluded that "Saturated fat does not cause heart disease." Nina Teicholz, writing in the Wall Street Journal in May noted that "One consequence is that in cutting back on fats, we are now eating a lot more carbohydrates – at least 25% more since the early 1970s...instead of meat, eggs and cheese, we're eating more pasta, grains, fruit and starchy vegetables such as potatoes."

"The problem is that carbohydrates break down into glucose, which causes the body to release insulin, a hormone that is fantastically efficient at storing fat...excessive carbohydrates lead not only to obesity, but also, over time, to Type 2 diabetes and, very likely, heart disease." Thanks to Big Government dietary guidelines and regulations, "the U.S. population (is) growing sicker and fatter while adhering to official dietary guidelines has put nutrition authorities in an awkward position."

The latest group to join the Food Police are those opposed to food grown with genetically modified organisms (GMO), calling for the labeling of them. This is intended to boost the sales of "organically" grown crops that allegedly do not use pesticides or herbicides. It is pure propaganda because, as Mishcha Popoff, a former organic farmer and USDA-contract organic inspector, and the author of "Is It Organic?" recently noted in a Daily Caller article that "A whopping 43% of all certified-organic food sold in America now test positive for prohibited pesticides." And, of course, "organic" food items cost more.

Simply put, crops need to be protected against insects and weeds. Always have and always will. There is no evidence that the proper use of insecticides and herbicides pose a health hazard. As one farmer told me, "My family eats what I grow. Do you think I would do anything to harm them?" Popoff notes that "The GMO industry is now well-established, with 35 years of science and over 20 years of commercial success behind it."

The government has no business telling Americans what they should eat. It too frequently offers bad science and almost always propaganda. In the home of the brave and land of the free this is yet another intrusion in the lives of Americans. What you eat and even how much is an individual freedom and choice.