Alan Caruba
The next great war 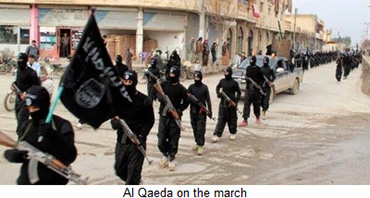 In the July 24 edition of The Wall Street Journal there was a commentary, "Wanted: Converts to Judaism" by the chancellor of the Jewish Theological Seminary, Arnold M. Eisen. I thought to myself that this was an extraordinary time to be suggesting conversion to a faith that is literally under attack in Israel and being attacked by the reemergence of anti-Semitism in Europe. Here in America we are witnessing the most pro-Islamic and anti-Semitic administration in the history of nation.

In the wake of the Holocaust following World War Two what anti-Semitism existed in the U.S. gave way to an era of good will toward Jews. In Europe open expressions of anti-Semitism were out of favor. Eisen's concern is the extensive inter-marriage between Christians and Jews in which Judaism is often abandoned in our historically Christian society. The news about Jews in the post-war years was largely about the nation of Israel and the wars it fought to re-establish and maintain the Jewish state.

What those wars should have told us was that Islamic hatred of Judaism extends to Christianity as well.

For Americans that lesson was driven home on September 11, 2001, but even the memory of that event has begun to fade to such an extent that Americans have twice elected a President who has never hidden his admiration for Islam, whose father was a Muslim, and who spent part of his youth in the Islamic nation of Indonesia. In office, his antipathy to Israel has been in stark contrast to the decades of support for Israel that presidents since Harry Truman have demonstrated.

A curious trend has emerged in America that runs counter to its entire history. The celebratory elements of Christian holy days, particularly Christmas, came under attack with demands that holiday scenes of crèches and even crosses be removed from public areas. Being religious was not encouraged and the tradition of starting the school day with a prayer was banned.

It is not too far a reach to say that the West, America and Europe, has been abandoning the depth of faith that distinguished it as church attendance fell off and resistance to attacks on the practice of religion declined. Home to some of the most beautiful churches on Earth, those in Europe are too often virtually empty.

This has not been the case in the Middle East and parts of Africa where Islam has awakened from its passive existence due in part to the colonization that preceded and followed World War One. The riches that oil provided have played a role and today a nation like Qatar is funding the emergence of ISIS, the self-declared caliphate calling itself the Islamic State.

Other oil-rich Middle East nations have supported al Qaeda only to discover that they were among its targets. ISIS has turned on Muslims in the area between Syria and into northern Iraq whom they declare hypocrites and apostates. In Mosul, Christians have been told to convert, pay a tax, or die.

While the rockets that have rained down on Israel are dramatic, the attacks on Christians throughout the Middle East have received less attention, but Christian Arabs have been driven from their homelands in the same way the establishment of Israel saw Jews forced to abandon homes in which they had lived for generations.

While Americans, joined by European negotiators, attempt to get Iran to abandon its nuclear weapons program, they remain blind to the role Iran has played for decades, using Hezbollah and Hamas, two Palestinian terrorist organizations, to wage war on Israel and, by extension, the U.S. Not a day goes by without the calls, "Death to America" and "Death to Israel." There is only one way to end Iran's nuclear program and that is to destroy the facilities that enrich uranium and plutonium. At some point, it will come to that because it must.

Israel is making it clear to the world that there is only one way to rid itself of Hamas and that is a military operation. Its troops are finding an astounding matrix of tunnels whose only purpose is to attack it.

Utterly devoid of any moral standards, Hamas uses homes, schools and hospitals to hide its arsenal of rockets and Palestinian civilians are forced to act as human shields. The world's media focuses on the deaths of their men, women, and children, but little notice of the rockets and missiles that continue to be fired at Israel. Meanwhile Hamas has been abandoned by Egypt and most other Middle Eastern nations other than Iran and Turkey.

The so-called Palestinians have been led by men like the late Yassir Arafat and currently by Mahmoud Abbas of the Palestinian Authority, Fatah. Abbas has recently moved his family to a home in Jordan in the face of criticism that he has been too "cooperative" with Israel. On Quds Day last week, an event organized throughout the Middle East by Iran, an estimated 10,000 protesters gathered in the West Bank to protest Israel's control of Jerusalem, a holy city to Jews and Christians, claimed as well by Islam. It was founded by King David.

Even so, the European business sector was quick to engage with Iran following the news of the negotiations which have been extended and which have granted Iran billions in return for sitting at the table to discuss an end to the nuclear program that it will never abandon.

In 1913, no one in Europe or America would have ever predicted the beginning of World War One in 1914. It began on July 28, 1914. As the historian Charles Emmerson said of the unanticipated war, "Humanity looked into the abyss and peering into the depths, found its own dark, disfigured reflection staring back."

In 2014, a century later, humanity needs to take a look at the fascistic, utterly immoral objectives and practices of Islam, and understand that it is at war with us, with moderate Muslims, and with all other faiths. It's not "if" will shall have to deal with it militarily as Israel is doing, but "when." That day is not far off.