Alan Caruba
The war on smoking (except maybe pot)

July 31, 2014
How obscene is it for a Florida jury to award $23.6 billion to the widow of a man who died of lung cancer in 1996? She sued R.J. Reynolds Tobacco Company by asserting that her husband had been "fooled" into starting the smoke at age 13. Apparently he had never heard cigarettes referred to as "coffin nails," a slang term that has been around since the last century. And how come all those patches, chewing gum, and other means to stop smoking had no effect, if used by her late husband?

This isn't justice at work. There are more than 40 million smokers in the U.S. today. Smokers, let alone cigarette manufacturers, however, haven't had the benefit of equal or fair-minded justice since 1984 when U.S. Surgeon General C. Everett Koop called for "a smoke-free society" by the year 2000. 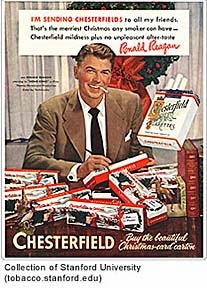 There was a time when it was perfectly okay to smoke cigarettes. As a youth in the mid-1950's I began to smoke them to look sophisticated. Producers advertised that as part of their appeal. Hollywood film actors like Ronald Reagan, as well as characters in films often smoked. And, yes, actors John Wayne and Humphrey Bogart both died from lung cancer. Others did too. It wasn't a secret, so if you smoked, you knew the risk.

That's where personal responsibility collides with nanny-government, forcing people to forego something they enjoy in the name of what the government deems inappropriate behavior.

As reported by Holman W. Jenkins, Jr., in "Who's the Real Cigarette Monopolist?" the so-called Master Settlement Agreement in 1998 on cigarette manufacturers was arrived at "when Florida and other states sued them for Medicaid costs of people supposedly fooled by cigarette advertising." The operative word here is "supposedly" because few smokers are unaware of the risk factor.

"A cigarette pack today fetches roughly $2.50 at the factory gate," wrote Jenkins, "on which the government collects $3.80 on average in state and federal taxes" as well as the payments due from the Medicaid rip-off scheme. Twenty years ago, the average pack of cigarette would have cost about $1.75. Today it is in excess of $5.00.

With prices more than twice as high than in the past and smoking bans everywhere, there are less cigarette smokers. As reported in The Wall Street Journal, "The U.S. adult smoking rate has plunged to below 20% from more than 40% half a century ago."

A survey by the Centers for Disease Control found that 18% of U.S. adults or about 42 million are cigarette smokers. For those who want to stop, only about one in twenty in any given year actually succeed according to various surveys.

And the government is not done yet interfering with the right of people to smoke. Steve Stanek, a research fellow at The Heartland Institute and managing editor of its monthly Budget & Tax News, recently reported that "E-cigarettes have no tobacco smoke but that hasn't stopped the Food and Drug Administration (FDA) from proposing rules to treat e-cigarettes much like tobacco-based cigarettes. The draft regulations also cover cigars, pipe tobacco and other tobacco products that have not been regulated like cigarettes."

Greg Conley, a Heartland Institute research fellow with a specialty in tobacco policy, points out that "By requiring the manufacturer of every single electronic cigarette product on the market to file a 'new tobacco product' application, the FDA has all but guaranteed the closure of tens or hundreds of small and medium-sized businesses with no connection to Big Tobacco."

Giving the Okay to Pot

Significantly, producers of "medical marijuana" are not subject to the rules affecting cigarettes and, as it dawns on federal regulators that there could be a lot of tax revenue from this market, I wonder how long it will take for the legalization of all marijuana use to fatten government coffers?

Probably not long at all. On July 26, a New York Times editorial opined that marijuana should be legalized, removing the federal laws prohibiting its sale and use. "After a great deal of discussion, the balance falls squarely on the side of national legalization." But it's still smoking!

Playing it safe, the Times' Editorial Page Editor, Andrew Rosenthal, told ABC's "This Week" that "We're not urging people to smoke pot any more than we are for them to drink alcohol or smoke cigarettes. It's just that making it illegal was creating a social cost for the country that was absolutely unacceptable." Yeah, sure.

Sen. Marco Rubio (R-FL) is blasting the FDA for its "job-killing" regulations on the premium cigar industry, citing the J.C. Newman Cigar Company, a 119-year-old family-owned cigar business based in Tampa, as the primary loser if the FDA institutes new regulations regarding the nicotine content of the wrappers used.

"We have gone through two World Wars, the Great Depression, the Cuban trade embargo, smoking bans, excessive taxation and competition from low-wage countries," co-owner Eric Newman told The New York Times, but the FDA may put it out of business. That, like the $23.6 billion award cited above is an obscenity too.

The excessive taxation is clearly discriminatory, along with all the other regulations and bans affecting smokers. A study published by the National Bureau of Economic Research found that "It will take sizable tax increases, on the order of 100%, to decrease adult smoking by as much as 5%,"

One is reminded of the failure of Prohibition, an earlier "public health" measure embraced by the U.S. government. People wanted to drink alcoholic beverages then just as now. And some people drink too much and die from alcoholism. Just as some people smoke too much. It is private, personal behavior that should not be regulated beyond the need for public safety, i.e., drinking and driving, nor discriminated against.

More and more, "progressive" government is taking the joy out of life. By its very nature, it must control everyone and everything they eat, drink, or enjoy.