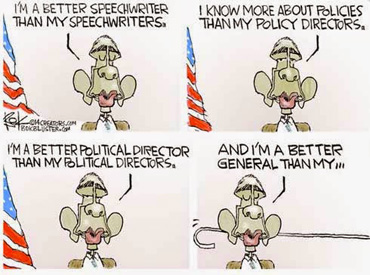 From time to time I hear President Obama described as "an evil genius," but he is neither. He's not evil. He's something much worse. He is a fool who thinks he's a genius.

This is not about his intelligence. No one gets to be President of the United States without some degree of intelligence. One suspects, however, Obama has always relied more on his charm and, initially, on the illusion of his charisma, based on his depiction by an adoring press.

His charisma has disappeared, even among the same press, but most abundantly among the American people of all political persuasions who now regard him as one recent poll put it, the worst President the nation has ever had.

Consider just a few of the ways his lack of judgment has reveal just how foolish he is. It began with foisting Obamacare on a nation deep in an economic crisis. He did this by telling lies about keeping one's insurance or physician. It worsened as the website turned out to be a disaster and one easily hacked to get the personal information of those who signed on.

His famous "red line" about Syria's Assad and his use of poison gas let Americans and the rest of the world watch him back off in a day's time, only to be rescued by Russia that intervened to remove the poison gas, but missing in that action was the realization that Russia has been Assad's main support. Their action was not an accommodation with the U.S. any more than Obama's "reset" with them had any effect on their larger strategic objectives in the Middle East.

The Middle East has been quicksand for Obama who thought he could go there, give some speeches, and convince everyone that he was a friend to Islam and his policies would reverse those of George W. Bush. He got elected in 2008 on that promise. In hindsight we know that withdrawing all U.S. troops from Iraq simply created the circumstances for the Islamic State, ISIS, to emerge. He was surely warned against doing it, but we have a President who does not want to go to war even against enemies who behead our citizens and promise to attack us.

Here, though, is where even those Americans not paying much attention to foreign policy became aware of how vacant Obama's was. He told them "I don't have a strategy" regarding ISIS, letting them and the rest of the world that he had not given any attention to an emerging threat. In the Middle East, his decision to side with the Muslim Brotherhood regarding the ouster of Egypt's dictator was reversed by Egyptians who demanded the removal of his replacement. In Libya he chose to "lead from behind" to topple Gaddafi, leading behind a nation that swiftly fell into divided camps between its tribes.

He has secured the support of Congress to spend a half billion dollars to arm the "moderate" rebels opposing Syria's Bashar Assad. They will be trained in Saudi Arabia, but it is all too little too late. In an excellent new book, "The Russia-China Axis: The New Cold War and America's Crisis of Leadership" by Douglas E. Schoen and Melik Kaylan ($27.99, Encounter Books), the authors spell out the foreign policy disasters that are leading America and the world toward the very real potential of World War Three.

Significantly, Schoen has been a major Democratic Party consultant for three decades. Kaylan is a widely respected expert on international politics and culture. When a Democrat co-authors a book that criticizes a Democrat President from beginning to end, others pay attention.

There is no way a rebel force can win in Syria. It has had to wage war against Assad's forces and against those of ISIS, the fanatical self-declared Muslim caliphate. While neither Russia nor China want to see the jihadists secure control of the Middle East, Russia has made it clear that its support of Assad is deep.

In their book, the authors quoted a Russian government spokesman. "We have never changed our position on Syria and we never will" said Alexander Lukashevich, the Russian Foreign Ministry spokesman in December 2012. "A major Reuters report in January 2014 reported that Russia had 'stepped up supplies of military gear to Syria, including armored vehicles, drones, and guided bombs, boosting President Bashar al-Assad just as rebel infighting has weakened the insurgency against him."

"Russian (and Chinese) support for Assad is perhaps the most blatant example of the double game that Moscow and Beijing have played for years." It is one of which Obama has been ignorant. In an October 2012 debate with Mitt Romney, when Romney said Russia was a major threat, Obama dismissed him saying "The 1980s – they're now calling to ask for their foreign policy back." Obama seems not to have learned anything of the Cold War with Soviet Russia from 1945 to 1991 when it collapsed. What we know now is that President Putin intends to reclaim its former empire, beginning with the annexation of Crimea.

Russia has sent warships into the Mediterranean and the Black Sea with some patrolling waters new Tartus, Syria, home to its only naval base in the Mediterranean. In recent weeks, Russian military aircraft have crossed into territory near both Canada and the U.S. to demonstrate its capacity to do so.

Anyone who has been watching the PBS documentary about the Roosevelt's knows that Franklin D. Roosevelt faced a situation not unlike what exists today. Americans did not want to go to war again in Europe despite the threat that the Nazi regime represented. Roosevelt, seeing what was coming, had to carefully entreat Congress to reinstate a draft and to do what he could to arm Great Britain after it was attacked. Only the attack on Pearl Harbor by the Japanese and Hitler's subsequent declaration of war thrust America into World War II.

In contrast, Obama has reduced the U.S. Army to levels that it hasn't seen since the days leading up to World War II. Likewise, the Navy, Air Force, and Marines have experienced comparable cutbacks. If Obama had his way, the U.S. would have zero nuclear weapons.

Unlike Roosevelt, Obama initially dismissed the threat from the Islamic State (ISIS), fumbling around for a "strategy" to deal with it and then, in an astounding piece of stupidity, declaring that there would be no "boots on the ground" to destroy it, after saying that its destruction was his goal. Within weeks, he was bombing the Syrian sites where ISIS was located.

In the September 23 edition of The Wall Street Journal, columnist Bret Stephens confirms my analysis. "Every administration tries to spin events its way; every president gets things wrong. Mr. Obama is not exceptional in those respects. Where he stands apart is in his combination of ideological rigidity and fathomless ignorance. What does the president know? The simple answer, and maybe the truest, is: not a lot."

So, no, Obama is not an "evil genius." He is an appallingly foolish man completely lacking any knowledge of history, thoroughly ignoring the intentions of Russia and China, doing nothing for the past six years to energize the economy, and spending most of his time either fund raising or playing golf.