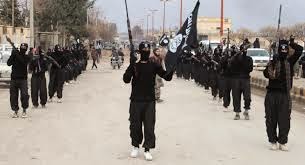 The lull in the coverage of all things Islamic was broken by two terrorist attacks in Canada, a reminder that so long as the world does not unite to destroy the Islamic State, we shall all remain vulnerable. A "lone wolf" terrorist can kill you just as dead as one in a terrorist organization, particularly one encouraging these attacks.

While the media's herd mentality continues to report about Ebola in West Africa and gears up for massive coverage of the forthcoming November 4 midterm elections, the Middle East remains in a low state of boil, never failing to produce bombings, skirmishes, and the usual inhumanities we associate with Islam.

Americans pay attention to the Middle East only when blood is flowing and at the present time the only element generating that is the Islamic State (ISIS) which continues to attack Kobani in northern Syria and assault the Yazidis and other targets in Iraq. The U.S., Britain and France are bombing ISIS forces, largely to protect and assist the Kurdish Peshmerga forces, the only fighting force of any consequence.

Virtually unreported are the 18 million Muslim refugees throughout out the Middle East. The U.N. reports that these and internally displaced persons reflect the turmoil in Afghanistan, Iraq. Libya, Pakistan, Somalia, Syria, and Yemen. To grasp this, think about what either the U.S. or Europe would be like with a comparable number of refugees.

As David P. Goldman, a Senior Fellow at the London Center for Policy Research and Wax Family Writing Fellow at the Middle East Forum, noted October 20 on the Forum website, "That is cause for desperation: unprecedented numbers of people have been torn from traditional society and driven from their homes, many with little but the clothes on their backs."

"There are millions of young men in the Muslim world sitting in refugee camps with nothing to do, nowhere to go back to, and nothing to look forward to...never has an extremist movement had so many frustrated and footloose young men in its prospective recruitment pool."

So what does John Kerry, our Secretary of State, think is the greatest problem in the Middle East? While discussing the ISIS coalition with Middle East leaders, Kerry expressed the opinion a week ago that the Israeli-Palestine situation was the real problem. Apparently he is unaware that there is no Palestinian state and never has been. The one on the West Bank exists thanks to Israeli support and the one in Gaza, controlled by Hamas, provoked Israeli defense measures by rocketing it for months.

Prof. Efraim Inbar, director of the Begin-Sadat Center for Strategic Studies and a Shillman/Ginsberg fellow at the Middle East Forum, has a quite different point of view. "In reality, however, the novelty of the Islamic State, as well as the magnitude of the threat it poses, are greatly exaggerated."

Noting that many of the Arab states have "failed to modernize and deliver basic services" Prof. Inbar has little anticipation that ISIS could do that either. Moreover "Much of the fragmented Arab world will be busy dealing with its domestic problems for decades, minimizing the possibility that it will turn into a formidable enemy for Israel or the West."

What has seemed to escape Kerry's and the President's attention is the threat of a nuclear armed Iran. The negotiations to encourage Iran to step back from its efforts to create the warheads for its missiles do not appear to promise a favorable outcome. Iran managed to get some sanctions lifted and that was likely why Iran entered into them. They don't care what the West or the rest of the Middle East wants.

Neither Israel, nor Saudi Arabia are as naïve as the U.S. In March, Richard Silverstein, writing in Tikun Olam, reported that "the level of intense cooperation between Israel and Saudi Arabia in targeting Iran has become clear. Saudi Arabia isn't just coordinating its own intelligence efforts with Israel. It's actually financing a good deal of Israel's very expensive campaign against Iran." A recent explosion at an Iranian nuclear facility suggests that the campaign is still quite active.

Noting "airtight military censorship in Israel," Silverstein pointed out that information about the Israeli-Saudi relationship would not have been reported in an Israeli daily newspaper, Maariv, if both governments did not want Iran and the U.S. to know. In effect, the Saudis have replaced the U.S. as a source of support given President Obama's barely concealed dislike of Israel.

"But Israel," wrote Silverstein, "isn't going to war tomorrow." Israel will watch the outcome of the U.S.-Iran negotiations and determine what action to take or not at that point. Meanwhile, it will keep the pressure on Iran with its covert program.

At some point the news media will begin to pay more attention to the Middle East. It will not get much cooperation, however, from ISIS because the Islamic State has made it clear that only journalists that obey its rules and write what it wants will live very long.

The "religion of peace," Islam, has not produced much peace in the Middle East and elsewhere in the world for the last 1,400 years.