October 26, 2014
September 19th was an anniversary you did not read or hear about in the nation's news media. It marked six years – 2008 – since the first permit application for the construction of the Keystone XL pipeline was submitted to the federal government. Can you imagine how many jobs its construction would have created during a period of recovery from the 2008 financial crisis? President Obama is universally credited with delaying it. 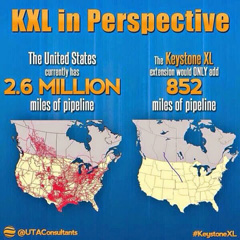 Thomas Pyle, the president of the American Energy Alliance, pointed out that World War II, the construction of the Hoover Dam, and the Lewis and Clark Expedition all took place in less time. In a September Forbes article, he noted that "Earlier this year a Washington Post/ABC News poll found that 65 percent of Americans support building the pipeline, while only 22 percent oppose it. In Washington three-to-one margins are usually referred to as mandates."

In contrast, in March 2013 the then-Interior Secretary of the Interior, Ken Salazar, boasted "In just over four years, we have advanced 17 wind, solar, and geothermal projects on our public lands." It is not these projects that Americans depend upon for energy. The opposite is a stark explanation why coal, oil, natural gas and nuclear energy remain the heart blood of the economy.

The Daily Caller reported in July that the "U.S. Bureau of Land Management is currently sitting on a backlog of 3,500 applications that need approval to move forward on drilling for oil and natural gas on federal land," just part of Obama's war on U.S. energy.

According to the U.S. Energy Information Administration, fossil fuels met 82% of U.S. energy demand in 2013.

Petroleum, primarily used for transportation, supplied 36% of the energy demand in 2013. Natural gas represented 27%. Coal represented 20% and generated almost 40% of all electricity. In the six years since Obama took office that is a loss of 10%!

The much ballyhooed "renewable sources" of energy, justified by the false claim that carbon dioxide emissions are causing global warming or climate change, are a very small part of the nation's power providers. Wind power represented 1.6% and solar power represented three-tenths of 1%! Hydropower supplied 2.6% making it the largest source of so-called renewable energy.

Politically, it has been Democrats advocating renewable sources and siding with the President's delay of the oil pipeline and the Environmental Protection Agency's assault on coal-fired plants to produce electricity. By contrast, the Republican-controlled House of Representatives has been busy putting forth legislation to fix aspects of our energy problems and needs.

Some of the bills that were introduced included H.R. 2728: The Protecting State's Rights to Promote American Energy Security Act; H.R. 3: The Northern Route Approval Act (regarding the keystone XL Pipeline; H.R. 1900: The Natural Gas Pipeline Permitting Reform Act; H.R. 2201: The North American Energy Infrastructure Act; and H.R. 6: The Domestic Prosperity and Global Freedom Act, intended to expedite the export of liquefied natural gas to our allies around the world. The global market is growing at a colossal pace.

These bills will likely all die in the U.S. Senate, controlled by the Democratic Party. The Nov 4 midterm elections can change that if enough Republicans are elected to gain control.

It's not just natural gas that is helping the economy improve. The Financial Times reported in late September that "The U.S. is overtaking Saudi Arabia to become the world's largest producer of liquid petroleum, in a sign of how its booming oil production has reshaped the energy sector." Why? "The U.S. industry has been transformed by the shale revolution, with advances in the techniques of hydraulic fracturing and horizontal drilling enabling the exploitation of oilfields, particularly in Texas and North Dakota."

The only places you won't find oil drilling are on federally controlled lands. The same holds for coal and natural gas.

This is in keeping with a virtual war on U.S. energy waged from the White House. Consider what we have witnessed:

# Obama has refused to let the Keystone XL pipeline be built.

# Billions wasted on loans to renewable energy companies, many of which like Solyndra and Solar Trust of America went bankrupt.

# Obama made electric cars like the Chevy Volt part of his energy policy, providing subsidies but their high cost and low mileage capacity has resulted in few sales.

# Obama and the EPA advocated a cap-and-trade tax on greenhouse gas emissions when there has been no global warming for 19 years and carbon dioxide plays no role whatever in the Earth's climate.

# The Obama administration terminating the construction of a nuclear waste repository at Yucca Mountain in Nevada despite nearly $15 billion already spent on this necessary repository.

These are just a few examples, but in the meantime, the U.S. still requires that a valuable food commodity, corn, be turned into ethanol, an automotive fuel additive, that (a) reduces the millage in every gallon and (b) increases its cost at the pump. As Seldon B. Graham, Jr., a longtime energy industry consultant and observer, notes that "Ethanol production peaked in 2011 at 6% of total oil demand." Favoring replacing imported foreign oil with American oil, Graham says "Americans would have saved $64.7 billion on the oil price since 2009."

Americans are afflicted by a President and his administration that for political and environmental reasons are costing them trillions in needless, senseless energy costs, loans and subsidies, and efforts to impose laws that have no basis whatever in science.