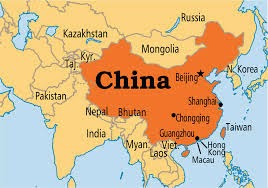 If there is one thing various experts and pundits like to do most it is to worry about all manner of speculative threats. I can recall when much of their focus was on the Soviet Union until 1991 when it collapsed along with the decline in the cost of oil. The fall of the Berlin Wall in 1989 signaled that it was no longer the feared power it had been.

Despite its invasion of Ukraine to annex the Crimea, the Russian Republic is in the same position its predecessor was because, once again, the price of a barrel of oil is falling. Turns out that the fracking technology that many environmentalists fear has also produced large increases in both oil and natural gas here in the U.S., that have created an oil glut that is driving its price down.

Largely unnoticed, however, have been the growing ties between Russia and China. They haven't been this friendly for a very long time. Even so, Communist China does not give any indication that it regards the U.S. as an "enemy" in the way Vladimir Putin does the European Union and NATO.

China has recently emerged as a larger economic power than the U.S., earning $17.8 trillion in terms of goods and services, compared to the U.S. $17.4 trillion. Not a great difference, but surely a symbolic one. China is a curiosity in that it has an authoritative Communist government and a burgeoning capitalist economy.

In 2013, China took steps to expand property rights (something that does not exist in Communist nations), expand fair and transparent market regulation, and prices set by the market.

When you have to govern more than 1.3 billion people, you have to find a way to lift as many as possible out of poverty. China's problem is that many of them are elderly thanks to its one-child policy. In 2013, China took tentative steps to loosen its one-child policy and it's a good guess they will get rid of it entirely at some point in the near future.

Examples of its economic power often make page one of The Wall Street Journal such as a December 9 article reporting that "In the past two years, Chinese investors have bought stakes in New York's most valuable office power, one of its largest development projects and the country's most expensive hotel ever sold." Should we worry about this? No, a few decades ago, such stories were about Japan's purchases of American properties and that nation has been in an economic stagnation for quite a while.

Back in 2008, Robert Samuelson, a Washington Post columnist, was worrying that "The real threat from China lies elsewhere. It is that China will destabilize the world economy. It will distort trade, foster huge financial imbalances, and tripper a contentious competition for scare raw materials." That's a pretty good description of what is being said about the United States today!

A new study by the Rand Corporation, "Blinders, Blunders, and Wars: What America and China Can Learn," devotes a chapter to U.S.-China relations saying "Whether and how the United States and China can settle their differences without war is among the most important questions of the twenty-first century." That has got to be one of the most presumptuous questions asked by the respected think tank. It borders on foolishness because there is no good reason why either nation would engage in a war on one another.

There is no question that China, the largest nation in Asia, has been flexing its muscles, building up its military capabilities, and seeking to expand its authority over the China Sea and adjacent areas. Any nation of its size would be expected to do the same thing. Even Russia is keeping its neighbors on edge with its Ukraine incursion, knowing perhaps that neither NATO nor the European Union would go to war over its complete takeover. The threat is there, but that does not mean it will occur.

The good news from Rand is their observation that war between the U.S. and China "could be catastrophic" and therefore "both powers are strongly inhibited from starting one." You do not need to be a think tank expert to figure that out, but the Rand study also says "The danger of Sino-U.S. war by misjudgment is related to but different from that of Sino-U.S. war by accident."

The study's reason for this is that "China sees America's East Asian alliances as throwback to Cold War thinking and, more alarmingly, as indicative of America's new intent to align the region against China." That's think tank talk for China's paranoia based on centuries of control and exploitation by outside forces such as the former British Empire, subjugation by the former Empire of Japan, and its fear of America's longtime naval presence in the Pacific.

China most certainly has nothing to fear regarding war with the current U.S. administration that doesn't want to even admit that it has reengaged in the war occurring in Iraq. In a similar way, the U.S. has no reason to disturb its financial dependence on a China that owns much of its debt.

Think tanks like Rand will not cease to worry about all the options and events that affect the China-U.S. relationship, but for the near future, there are other factors such as the threat the Islamic jihad represents. The only constant in international affairs is change.