Alan Caruba
Hillary will not run for president 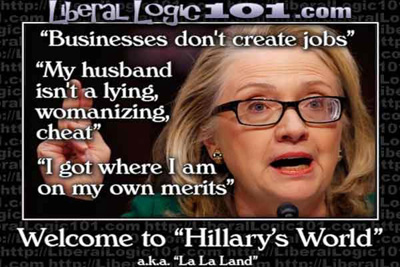 The revelations, reported initially in the most left-wing newspaper in the nation, The New York Times, that Hillary Clinton used her own private emails to conduct public business, suggests that there are forces within the Democratic Party that do not want her to be its candidate for President in 2016.

It's not like Hillary did not know she was supposed to use the State Department's email system for reasons of national security; her private emails could have been hacked by forces unfriendly to the U.S. All government employees are routinely briefed on the laws that require this.

For the record, I am no fan of Hillary Clinton. On September 18 of last year, I wrote a commentary titled "Go Away, Hillary" in which I asked "Other than earning her law degree, name one thing that Hillary Clinton has accomplished on her own. Her accomplishments – slim as they are – have been achieved on the coattails of either Bill Clinton or Barack Obama."

Beyond Hillary, what I object to is the necessity to raise millions with which to secure either Party's nomination and a billion to run for the presidency. We are electing someone who has literally bought the election courtesy of donors who have made the selection for the rest of us. There is something fundamentally undemocratic about that.

That said, I don't think Hillary Clinton will run in 2016.

That may surprise you, but it surprises me as well. And, yes, I could be wrong, but the revelations about her patently illegal email use while Secretary of State suggests that there are forces within her Party that want to end her candidacy now rather than later. They are sending her a message.

Ron Fournier is the Senior Political Columnist and Editorial Director of National Journal. Prior to that, he worked at the Associated Press for 20 years, most recently as its Washington Bureau Chief. On March 3rd, he wrote an opinion piece titled "Maybe she doesn't want to run in 2016, top Democrats wonder. Maybe she shouldn't."

"Two weeks ago," wrote Fournier, "we learned that the Clinton Foundation accepted contributions from foreign countries. Assurances from the Obama administration and Clinton aides that no donations were made during her tenure as Secretary of State were proven false."

"Now The New York Times is reporting that Clinton used a personal email account to conduct government business as Secretary of State, an apparent violation of federal requirements that her records be retained." He quoted one unnamed "senior Democrat" as saying "This story has legs as long as the election," noting that many senior Democrats "are angry."

"My concern," wrote Fournier, "is that Clinton does not see this controversy as a personal failing. Rather, she sees it as a political problem that can be fixed with more polls, more money, and more attacks." He described her problem as "a lack of shame about money, personal accountability, and transparency."

If there is one thing to which the Democratic Party is totally dedicated, it is winning the White House and control of the Congress. Ever since President Obama has been in office, it has taken a beating as voters have relentlessly transferred power to the Republican Party in Congress and in many States. It is an unmistakable trend and one that must keep Democrat strategists up at night.

In January 2014, a Pew Research poll found that 69% of women who identified themselves as Democrats hoped to see a female President in their lifetime, compared to only 20% of Republican women. In April 2014, a Rasmussen poll found that "51% of likely U.S. voters have at least a somewhat favorable opinion of Clinton, while 44% view her unfavorably."

The Huffington Post analysis of the Pew poll concluded that "not wanting Clinton in office is the only one explanation for Republican woman's relative lack of enthusiasm about electing a candidate of their own gender," adding that "It may be that (the) gender of a candidate has simply become a less compelling factor for voters..."

Six years of having a President who was elected primarily because he is black have taught voters that race and gender are insufficient factors on which to base one's vote.

Six years of a sluggish economy, massive unemployment, declining wealth among the Middle Class, and a disaster called foreign policy will influence 2016 votes along with, of course, whoever the candidates may be.

So I will return to my conjecture that Hillary, no matter her desire to be the first woman U.S. President, will also have to address the practical realities of politics. Opposition from within the Democratic Party will likely be a deciding factor. She has put off announcing her intentions until April. If she puts it off again that would suggest some deep misgivings.

If you had the choice between a life of great wealth and fame as opposed to the daily inquisition and criticism that comes with the presidency, which would you choose?