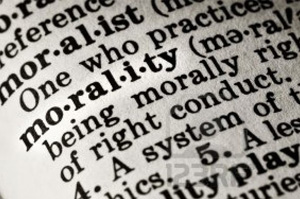 "We have no government armed with power capable of contending with human passions unbridled by morality and religion. Avarice, ambition, revenge or gallantry would break the strongest cords of our Constitution as a whale goes through a net. Our Constitution is designed only for a moral and religious people. It is wholly inadequate for any other."

It's hard to consider the success of the book and film "Fifty Shades of Gray" without thinking that America has become morally bankrupt in terms of its views toward sexuality and, of course, in other ways as well.

At about the same time I was thinking this, a recent issue of The Wall Street Journal had an article titled "Unmarried...With Children."

Let me say up front that, having spent the bulk of my life in the last century, I have been a witness to the changes that have occurred and they portend a society that in many ways is in deep trouble. It is not one in which I would want today's generation of children to grow up. That said, today's children are drenched in all manner of information for good or ill that was simply not accessible to earlier generations. Since it reflects the views of popular culture, it often conveys the wrong lessons.

In my youth and up to around the 1960s, some thirty years, the America in which I grew up disapproved of casual sex, abortions, unmarried people living together, pornography, and comparable issues. That has changed.

The article cited the fact that "More than a quarter of births to women of childbearing age – defined here as 15 to 44 years old – in the past five years were cohabiting couples, the highest on record and nearly double the rate from a decade earlier, according to new data from the Centers for Disease Control and Prevention for 2011 to 2013."

And here's a statistic that really caught my attention: "Cohabiting parents now account for a clear majority – 59% – of all births outside marriage, according to estimates by Sally Curtin, a CDC demographer. In all, 40% of the 3.93 million births in 2013 were to unmarried women." Moreover, "It is mostly white and Hispanic couples who are driving the trend, not black couples, experts say."

"Affluent, highly educated Americans still largely marry before starting families, and single mothers remain more common among the poor." There was a time when the vast majority of Americans regarded marriage as the bond that had to first exist before a family was started.

There was a time when single motherhood was considered shameful from a moral point of view and understood to be harmful to society in general. According to a 2013 Pew Research Center study, a third of single mothers aren't working, meaning they are likely to depend on government welfare. Feminists may call this "liberation," but for those experiencing it, it is called poverty. The median income of working single mothers these days is $23,000 and 44% are never-married moms.

Demography, the study of how a society is composed, looks at the statistics related to age, gender, race, employment, earnings, and other factors may sound like dry stuff, but it reveals where a society is and where it is going.

In a 2012 article by Michael Snyder, "Which is Better – A Society with Loose Sexuality or a Society with Strict Rules for Sexuality?" the author notes that "Today, the percentage of U.S. adults who are married is at an all-time low. According to the Pew Research Center, only 51% of all Americans who are at least 18 years old are currently married at this point. Back in 1960, 72% of all U.S. adults were married."

The U.S. has the highest divorce rate in the world "by a wide margin" noted Snyder. "What that means is that there are a lot less 'family units' than there used to be, and America has become a very lonely place."

It is also a place which has huge rates of illiteracy. You may not connect literacy, the ability to read, and sexuality, but both relate to the behavior of people. For example, more than 70% of America's inmates cannot read above the 4th grade level. It means that 75% of Americans who receive food stamps perform at the lowest two levels of literacy, and 90% of high school dropouts are on welfare. One in four children in America grow up without learning how to read.

Now the connection; teenage girls between the ages of 16 to 19 who live at or below the poverty line and have below average literacy skills are six times more likely to have children out of wedlock than girls their age who can read proficiently. These statistics are courtesy of DoSomething.org.

None of the statistics regarding sexuality in America are good for the future of America.

There are other issues that worry my generation. One of them is the legalization of same-sex marriage. The mere use of the word "marriage" to identify such a relationship signals the further destruction of the key element of any healthy society.

From the point of view of health, the legalization of marijuana use is another threat to the welfare of society. There was a reason it was considered dangerous and was illegal. A decade from now we will likely read about the affect it has had on the brains of young people now using it. According to the Substance Abuse and Mental Health Services Administration, currently 2.7 million Americans age 12 and older meet the clinical criteria for marijuana dependence or addiction.

For those of us old enough to remember an America where the statistics and trends cited here did not exist because public opinion guided people, particularly the young, toward a more cautious and responsible attitude about sex and marriage, what is occurring is troubling to say the least.

Morality may be ignored, but it never ceases to provide the foundation and guidelines for a healthy society.