Alan Caruba
Living in an era of decline

April 14, 2015
Most of us know whether we are living in good times or bad. Some of us warn of decline when we see it coming. Some choose to ignore it by distracting themselves. The latter assume they cannot change events, but in a democracy where you get to vote for who represents you, we are all participants in one fashion or other, whether we vote or not. 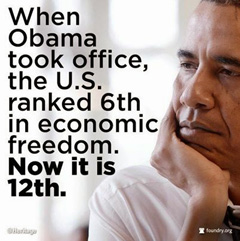 If Hillary Clinton is elected President in 2016, historians and those who have lived through the first twenty years of this new century will see this score of years as one that began with much hope and descended rapidly into an expanding Islamic war on the world, seen most dramatically on 9/11 and followed by a financial disaster in 2008 that was widely predicted as the government pressured banks to make bad mortgage loans. It is doing that again.

Dramatically, too, in 2008 Americans – constantly told how racist we are – voted for the nation's first black President, Barack Hussein Obama, even though little was known of him. Significantly, too, the voters rejected Hillary Clinton, thought to be the "inevitable" choice as the first woman President. Neither race, nor sex, is a predicate for being the leader of the free world. Experience, knowledge, and moral integrity is.

There is something tragic when a political party is able to offer only the past as their idea of the future. President Obama is already widely seen to have been a failure, presiding for six years while the nation's debt soared to $18 trillion and millions remain unemployed. His foreign policies were administered by Hillary Clinton in his first term and her idea of what to do with nations that are our enemies is to "emphasize" with them and even "respect" our differences with them.

The most recent examples have been the negotiations with an Iran determined to have nuclear weapons and opening the door to diplomatic recognition of Cuba, a Communist dictatorship ninety miles from Florida.

What has been cited is a definition of national decline. As we close in on the 2016 elections, we are also at risk of having begun the new century from a position of leadership and strength we may not be able to achieve again due to our debt and the failure of a vision for a better future. While we have been living through these years, we have also understandably been paying greater attention to our own individual lives.

As a member of the senior generation, I and my cohorts have watched America decline from the most powerful nation on Earth, a leader for freedom, a stalwart opponent of the Soviet Union and Communism, to one led by a pathetic apologist who never passes on an opportunity to criticize America and emphasize its failure to live up to its ideals. We're not perfect, but we still provide justice and opportunity as no other nation on Earth.

The generations behind us such as the "boomers" who arrived after World War II, enjoyed much of the best America has had to offer, but in the 1960s tended toward the growth of the drug culture and unwittingly experienced the decline in education standards that has left later generations devoid of knowledge about our founding principles and early struggles. More than twice their parents and grandparents engaged in wars far from home to thwart totalitarian regimes. 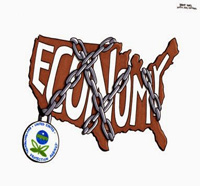 In the 1970s America saw the growth of the environmental movement which, by the late 1980s, was regaling everyone with doomsday predictions about a "global warming" that never occurred. What did occur was a government agency, the Environmental Protection Agency, that is threatening to cause a massive loss of the electrical and other sources of energy on which the nation – you and I – depend. Electricity may seem magical, but it requires years and years of planning and construction to ensure it is available when we flip the light switch. The EPA is quite literally an enemy comparable to one with an invading army.

So all of us, young and old, have arrived at the tail end of the first twenty years of the new century in a very different America than took on the challenge of the twentieth century and turned it into one of innovation and achievement.

That is critical to the choices Americans must make because the 2016 elections can either take us backward to past times – the 1990s – or forward to face the great challenges of our present and future times. We had financial success along the way, but we also had a massive financial failure in 2008 that originated earlier thanks to progressive ideas about home ownership. In 2001 we responded to the worst homeland attack since Pearl Harbor in the 1940s, fighting wars in Afghanistan and Iraq, but not grasping the full scope of the Islamic threat.

The progressive ideas of the current administration that the presumptive candidate of the Democratic Party will emphasize will allege inequities and inequalities between the Middle Class and those they call the "one percent" of the wealthy. Despite the fact that the wealthy are the source of millions in campaign funds, they will publicly scorn them as "Wall Street" and the "Big Banks." This is very much in keeping with the Progressive demonization of "Big Oil." "Big Coal" and other alleged enemies of the nation.

These major elements of our economy are all in fact enemies of unemployment, providing thousands of jobs with good pay, and enemies of decline, providing the energy America needs to exist and grow.

The most disquieting aspect of the months ahead will be the role of the mainstream media that, with a few exceptions, will be the megaphone for failed progressive ideas, policies and programs. They will suffer a forgetfulness of the many scandals that have led to Hillary Clinton's present bid to be the next President.

We are living in an era of decline that must be rejected and turned around with the "old fashioned" virtues of a marketplace economy free of a tax code no one can comprehend, environmental policies that slow and kill development, a federal government grown too large to do anything well – remember the introduction of ObamaCare and the fact that it has driven up insurance costs, not reduced them?

All of us of voting age have a heavy responsibility to know and understand the times in which we live and to make wise choices or know we shall be living in an era of failure for the nation we love.