August 25, 2014
The American public has been misinformed regarding human-to-human transmission of Ebola. Assurances that Ebola can be transmitted only through direct contact with the body or body fluids of victims needs to be seriously scrutinized in the wake of the current West African outbreak. The Canadian Health Dept. states that airborne transmission of Ebola is strongly suspected and the CDC admits that Ebola can be transmitted in situations where there is no physical contact between people, i.e.: via direct airborne inhalation into the lungs or into the eyes, or via contact with airborne fomites which adhere to nearby surfaces, where individuals are separated by 3 feet. That helps explain why 81 doctors, nurses and other healthcare workers have died in West Africa to date. These courageous health care providers use careful CDC level barrier precautions such as gowns, gloves and head cover, but it appears they have inadequate respiratory and eye protection. Dr. Michael V. Callahan, an infectious disease specialist at Massachusetts General Hospital who has worked in Africa during Ebola outbreaks said that minimum CDC level precautions

"led to the infection of my nurses and physician co-workers who came in contact with body fluids."

Currently the CDC advises health care workers to use goggles and simple face masks for respiratory and eye protection, and a fitted N-95 mask during aerosol-generating medical procedures. Since so many doctors and nurses are dying in West Africa, it is clear that this level of protection is inadequate. Full face respirators with P-100 (HEPA) replacement filters would provide greater airway and eye protection, and I believe this would save the lives of many doctors, nurses and others who come into close contact with, or in proximity to, Ebola victims.

The United States Army Medical Research Institute of Infectious Diseases conducted a monkey to monkey Ebola study in December 1995, published in The Lancet, Vol 346. Here is a link to the abstract, but the entire article must be purchased. Several rhesus monkeys were infected with Zaire Ebola by intramuscular injection while three control rhesus monkeys were kept in cages separated 10 feet from the infected monkeys. All of the injected monkeys died of Ebola by day 13 and 2 out of 3 control monkeys died of Ebola by 8 days after that. The authors of this study concluded that:

"The exact mode of transmission to the control monkeys cannot be absolutely determined, although the pattern of pulmonary antigen staining in one of the control monkeys was virtually identical to that reported in experimental Ebola virus aerosol infection in rhesus monkeys, suggesting airborne transmission of the disease via infectious droplets... Fomite or contact droplet transmission of the virus between cages was considered unlikely. Standard procedures in our BL4 containment laboratories have always been successful in the prevention of transmission of Ebola or Marburg virus to uninflected animals. Thus, pulmonary, nasopharyngeal, oral, or conjunctival exposure to airborne droplets of the virus had to be considered as the most likely mode of infection... Our present findings emphasize the advisability of at-risk personnel employing precautions to safeguard against ocular, oral, and nasopharyngeal exposure to the virus."

Another NHP to NHP (monkey to monkey) study was published in July of this year. Rhesus monkeys were infected with Ebola via intramuscular injection and they were terminated on day 6 after becoming unresponsive, but without developing vomiting, diarrhea or apparent respiratory illness. Ebola virus was detected in their blood, and genetic fragments of Ebola were found in their nose, mouth and rectum, but no intact infectious Ebola virus was found in their nose, mouth or rectum by tissue culture. Control cynomolgus monkeys were caged 1 foot away from the infected rhesus monkeys but did not become infected with Ebola. This experiment is not a helpful comparison for human to human Ebola infections which are characterized by GI (vomiting & diarrhea) and respiratory (cough and expectoration of sputum) shedding of the intact infectious virus. The monkeys in this year's study simply died too fast, not allowing time for them to shed infectious Ebola particles. It goes without saying that monkeys which do not shed infectious Ebola particles cannot transmit Ebola to other monkeys. Had this year's rhesus monkeys been infected by the nasal route, as was the case in a pig to monkey experiment in 2012, or if they had lived up to 13 days as in the 1995 study, allowing time for intact infectious Ebola virus to appear in their nose, mouth and rectum, and thus more closely matching human Ebola disease, then it is likely we would have once again seen monkey to monkey airborne transmission of Ebola. The authors of this study concluded that:

"NHPs [non-human primates such as monkeys] are known to be susceptible to lethal EBOV infection through the respiratory tract [just like humans] putting the onus of the transmission on the ability of the source to shed infectious particles."

We know that airborne transmission of Ebola occurs from pigs to monkeys in experimental settings. We also know that healthcare workers like Dr. Kent Brantly are contracting Ebola in West Africa despite CDC level barrier protection measures against physical contact with the bodies and body fluids of Ebola victims, so it only makes sense to conclude that some, possibly many, of these doctors, nurses and ancillary healthcare workers are being infected via airborne transmission. It makes perfect sense that sick hospitalized humans, as they vomit, have diarrhea, cough and expectorate sputum, and as medical procedures are performed on them, have the ability to shed infectious Ebola particles into the air at a similar or higher level compared to the rhesus monkeys in 1995 and the wild boar in the pig to monkey study from two years ago, and are not comparable to the Ebola-infected monkeys described in this year's experimental laboratory setting, monkeys which in fact did not shed infectious particles.

Dr. Brantley acquired Ebola while strictly following CDC guidelines (simple mask, goggles or face shield, gloves, gown, leg covering, shoe covers), so it is likely he became infected by inhaling contaminated droplet nuclei into his lungs or having them settle into his conjunctival (eye) sacs despite the use of CDC level protection against direct contact. Dr. Brantly apparently did not use a full face respirator with P-100 filters, but rather a simple or N-95 face mask. An interviewer noted that

"Brantly says he isn't sure how he got infected. He's certain he didn't violate any [CDC] safety guidelines."

It is apparent that the primary mode of person to person Ebola transmission is through direct contact with the body or body fluids of Ebola victims, but it is unwise to ignore the airborne mode. Current evidence supports healthcare workers using a higher level of airway and eye protection than is currently recommended. Although less airborne than Influenza, it is reasonable to conclude that the West African strain of Ebola is at times spread by airborne means since over 170 medical workers have been infected to date, with 81 dead, and since we know that airborne transmission of Ebola occurs in other species. Dr. Brantly, and Dr. Callahan's physicians and nurses, were using CDC level protective measures against direct contact with the bodies and body fluids of Ebola patients, leaving airborne transmission as the remaining alternative mode.

Aerosol generating medical procedures such as surgical operations, endotracheal intubation, airway suctioning and the operation of mechanical ventilators or BiPap devices place physicians, nurses and ancillary health workers at very great risk, and I suspect even bathing patients is likely to generate infectious airborne droplets into the air. "Casual contact" or spending hours in the same room with Ebola patients also places medical personnel at significant risk, even with the CDC recommended protective measures listed above, as was the case with Dr. Brantly, so in retrospect it is clear that he was not at "low risk" as the CDC would have us believe. As Dr. Michael V. Callahan observed first hand, and as the case of Dr. Brantly demonstrates, absent effective pharmacological treatment the current CDC guidelines are inadequate for preventing nosocomial transmission of Ebola from patients to medical workers in the confined spaces of hospital settings. Since CDC level respiratory/eye precautions for Ebola are inadequate for healthcare workers in West Africa, I assume they will also be inadequate in the United States since, as things now stand, very few Ebola patients in the US would be able to receive ZMapp or similar therapy, which presumably would reduce the risk of Ebola transmission to our medical workers.

Simple face masks, and N-95 masks as well, are not good enough to filter out Ebola contaminated airborne particles, and they do not have silicon rubber seals against the face to prevent entrainment (leaking) of contaminated room air in clinic and hospital settings. Likewise, goggles and face shields are inferior in eye protection compared to full face respirators with P-100 filters. It is not feasible for all medical workers in the United States to use "spacesuits" with a self contained breathing apparatus (SCBA) air supply, as used in BL4 labs and at hospitals specially equipped for Ebola, but at a minimum the American healthcare system should immediately upgrade respiratory / eye protection to full face mask respirators with P-100 filters for known or suspected cases of Ebola.

If Ebola comes here via infected individuals from affected overseas areas, and spreads from these cases to American medical personnel, the damage to our society would be greatly magnified. Not only would we lose doctors, nurses and other medical workers who could no longer provide care to Ebola victims (not to mention loss of care for the normal influx of patients), the medical team would its self become sources of Ebola transmission to others. Considering the deadly virulence of the Ebola virus, with a 50-90% death rate, it be behooves us to err on the side of safety rather than on the side of risk by increasing the level of respiratory and eye protection for our medical teams. In the absence of a widely available cure for Ebola, the scientific evidence should compel us to exercise a higher standard of preventive care.

It just came to my attention that the Public Health Agency of Canada has, just in the last few days, under the heading "Mode of Transmission," removed the text which stated Ebola transmission between people had not been proven, but was "strongly suspected." Down the Orwellian memory hole. 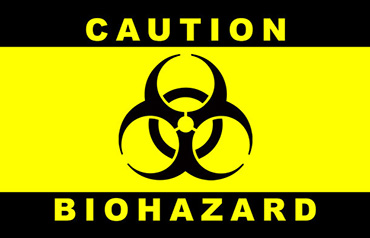