November 23, 2014
For a little more than two weeks there's been a war of words between North Carolina Senate Republicans lead by State Senate President Pro-Tempore, Phil Berger, and Judge John W. Smith, director of the State's Administrative Office of the Courts (AOC).

A letter from Berger and other Senate Republicans stated magistrates in the Tar Heel State that hold strong religious objections to same-sex marriage should not have to choose between their jobs and violating their consciences by performing gay nuptials. The letter cites federal law, the First Amendment, and judicial rulings that provide an exemption for magistrates.

Nevertheless, AOC Director Smith claims that magistrates swear an oath to the United States Constitution, and, therefore, have a duty to perform such marriages since two federal judges have ruled the State's Marriage Amendment that defines marriage as one man and one woman is unconstitutional. Smith adds in his latest correspondence that he believes Berger may be misleading magistrates to believe they can opt out.

At least six magistrates have resigned their post since the State's Constitutional Marriage Amendment was knocked down.

The AOC has sent a guidance memo to magistrates stating:

"If a magistrate refuses to discharge the duties of his or her office, including a refusal to perform a marriage of a same-sex couple, that refusal is grounds for suspension or removal from office, as well as, potential criminal charges."

Perhaps in an effort to reconcile the dilemma many magistrates have between their faith and their duties to the State, Smith cited in his latest correspondence to Berger the comments of a chief magistrate who is also an ordained minister. Smith says the magistrate urged him to communicate "his analysis in the hope that it might be helpful to those facing the issue." This is what the magistrate wrote:

As an ordained minister and chief magistrate, I have given much consideration to the question of same-sex marriage long before it became law in North Carolina. I think I have reached a reasonable conclusion that should satisfy the concerns of most concerned parties. I offer the following for your consideration as you see fit.

Should magistrates be required to either quit their jobs or violate their conscience in being forced to marry people of the same gender? It is a matter of Church vs. State, and in this area the Scriptures give us guidance. Jesus said, 'Render unto Caesar that which is Caesar's and unto God that which is God's' (Matt. 22:21). Civil marriage is an act of the State. Same-sex marriage, like the coins that were struck with the graven image of Caesar – a violation of the 2nd Commandment but necessary for the Jews of that day to use to engage in commerce and to survive in their secular culture – belongs to the State. Holy matrimony still belongs to the Church. Magistrates are not ministers, so let's not confuse the two. Same-sex marriage is a function of the courts performed by a judicial magistrate who has sworn an oath of office to uphold the laws of the State. Holy marriage, the sacred union of a man and a woman, remains a sacrament of the Church performed by an ordained minister who has pledged a vow of holiness unto the Lord. Civil marriage and Holy matrimony are not the same even though semantically they use the same word. While moralistic, I hope this does not come across as too judgmental. Hope this helps!

Unfortunately, the chief magistrate/ordained minister's analysis of Jesus statement to "Render Unto Caesar that which is Caesar's and unto God that which is God's" is the result of an all-too-common poor exercise of hermeneutics, and, thus, sets up a false dichotomy.

The interpretation erroneously argues the state has authority over certain things, such as politics and matters of government, while God has authority over certain things, such as one's religious obligations. When, actually, Jesus was simply speaking from the lesser to the greater. Jesus was really saying, if it is true that you have obligations to the state (Caesar), how much greater your obligations to God!

It's a given the people had a legitimate debt to their government for its various protections and benefits, nevertheless, this is a far cry from saying, as too many have reasoned today, that the authority of the State is separate and removed in some way from the authority of God.

McDurmon goes on to rightly note that not only is this how Jesus's contemporaries would have understood Him, but they "would have immediately understood the theological nature of rendering unto God." [2] It was prominent throughout the Jewish psalms of worship, he says:

"My praise shall be of thee in the great congregation: I will pay [render; same Greek word] my vows before them that fear him" (Ps. 22:25).

Moreover, it appears in the Levitical law, says McDurmon. The "Levites were set apart for Temple service, they were presented before the High Priest and 'offered' or 'rendered' unto God as an offering (Lev. 8:13). Their whole persons were rendered unto God." 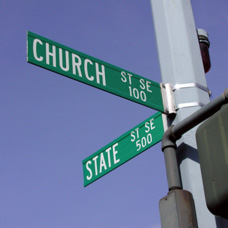 The point here is that as citizens of an earthly kingdom each of us must render unto the state what rightfully belongs to it. If we enrich ourselves with privileges afforded by the state as the religious leaders of Jesus' day had done, then there is an indebtedness to pay back. Still, the State has no right to claim for itself what belongs to God. Nor is it that the state has authority over some things like a man's taxes, but God has authority over his tithes. It is more that all of what one possesses belongs to God. Caesar may have his image stamped on a coin, but God has his image stamped on every man's person. Thus, the state may claim this or that for itself, but in reality the earth is the Lord's and the fullness thereof (Psalm 24:1). Every issue of life falls under God's dominion.

Marriage is certainly an institution that belongs to God and the State has no right to pervert God's order for it. Furthermore, magistrates or clergy have no right to perform marriages outside of God's sovereignty in the matter.

We cannot set up false dichotomies to evade God's authority. We cannot separate His revealed will in the laws of nature or holy writ from civil government or the body politic. Jesus' statement to render unto the State what belongs to the State and unto God what belongs to Him provides us with no luxury for divided loyalties.