Back in the 1980s, I was an associate minister in charge of the children's ministry at a church in upstate New York – not far from Buffalo. The church had a children's worship that met on Sunday mornings separate from the adult's traditional morning worship. The children's church service featured special characters that would share the Gospel in ways that resonated well with kids. There was, "Tick-Tock the Grandfather Clock," "Jack, the Pirate," "Moe, the Hobo," and "The Old Circuit Rider," who actually rode a real horse to church on the Sundays he visited. The youngsters loved it and attendance was always high.

One year, I got the surprise of my life when during the week of July 4th; Uncle Sam was introduced as a new character. A very tall lean man donned the patriotic costume of Uncle Sam and looked and played the part magnificently. Nevertheless, much to my astonishment the children didn't like him. When I corralled a few of them to ask why, their answer was obviously the parroting of the complaint they had repeatedly heard from their parents. "He makes us pay taxes," they said.

The Bible speaks to the struggle between the people and a large government bureaucracy that saddles them with heavy taxation.

During Old Testament times the nation of Israel was being tyrannized by the Philistines. When they cried out to the Lord for help, God provided Samuel who became a great prophet and judge over the nation. Under Samuel, the Philistines were routed and the people delivered. Samuel led wisely under the authority of God. But as the prophet grew old, the people could see that Samuel's sons wouldn't afford them the same quality of leadership. Rather than look to God for the answer, the Bible says they chose to reject the Lord and be like the nations around them. They wanted a king. (I Samuel 8:19-20).

God told Samuel, "It is not you they have rejected, but they have rejected me as their king...Now listen to them; but warn them solemnly and let them know what the king who will rule over them will do" (I Samuel 8:7, 9).

This is the warning God gave to them through Samuel:


"This is what the king who will reign over you will do...He will take the best of your fields and vineyards and olive groves and give them to his attendants. He will take a tenth of your grain and of your vintage and give it to his officials and attendants...The best of your cattle and donkeys he will take for his own use. He will take a tenth of your flocks, and you yourselves will become his slaves. When that day comes, you will cry out for relief from the king you have chosen, and the Lord will not answer you in that day." (I Samuel 8: 11, 14-18).


Israel was warned that a king would concentrate power, create big government that would reach far into their lives and burden them with excessive taxes, reduce their wealth and prosperity potential and ultimately take away their freedom. Because Israel desired security and protection from government rather than God, they ignored Samuel's warning and chose a king. Their choice proved to be most problematic, just as God had warned them. They would suffer oppressive taxation, while their social order slowly unraveled and their liberties failed.

Anytime a culture rejects God's sovereignty over them, looks to government to save them, and neglects to combine a robust faith with the virtue of personal responsibility, that decision will cost the people dearly.

The late U.S. Senator from North Carolina, Jesse Helms, once said, "It is debatable at just what point the United States began to drift away from its Christian heritage. But I think we reached that point when many Americans turned away from the idea of salvation through Christ to that of salvation through technology or science or material affluence or the welfare state." [1]

In Romans chapter 13, the apostle Paul instructs that government's role is to provide for the defense of the God-given liberties of the people. Its function is to suppress evil, punish evildoers and keep the peace. The apostle then adds, "For this cause you pay taxes..." (vs. 6).

Contrary to the thinking of many, Government isn't divinely authorized or sufficiently competent to provide things such as housing, food, child-care, health care, etc. Just because someone is in need that doesn't give the state the right to coercively take another person's property and give it to someone the government says should have it. That kind of taxation is not charitable and neither is it moral. Instead, it is a violation of the 8th Commandment of God, "Thou shalt not steal."

Yet we live in a time when government has become the "opiate of the people." We look to it as a panacea to all our woes, only to be left with the same difficulties in new forms and even larger ways. Government today, with its huge bureaucracy, is our chosen king and his court. 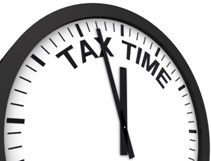 Under the king's convoluted and unjust tax policies our social life suffers. Government entitlement programs fail to actually help the poor, but instead drive men away from the home, promote illegitimacy and single parent households, and in certain situations actually foster unemployment, as well as limit opportunities for job creation and work.

Moreover, we are trillions of dollars in debt and merely passing it on to the next generation.

Under these conditions, true liberty is failing and subject to ultimately be completely lost.

God forewarned Israel that their choice of a king would come at a great price – putting their trust in government to protect and save them rather than God would make them into slaves – deferring personal responsibility for their own choices to the state would just make their burdens worse. They wouldn't listen and had to learn the hard way.

While many Americans write another large check to pay their taxes this year, how long do you think it will take before we get the message? Or will we just keep on grumbling and complaining against Uncle Sam, watching our freedoms fade away?