September 6, 2015
Since the dawn of time, labor has been a part of God's economy. Work is inherent to our purpose, meaning and dignity.

In 1999, the New York Times reported an incident in an impoverished country. Relief workers distributed food and other necessities to a long line of people who waited patiently. But when they distributed fishing nets, these same people cheered. [1]

The history of the celebration of Labor Day in America can be traced back to the year 1882, during the middle of the Industrial Revolution. It was a time of labor struggles and political protest against intolerable working conditions. People who were a part of the labor movement chose the first Monday in September as the official holiday to honor the contribution that workers "who from rude nature have delved and carved all the grandeur we behold." [2] In 1894, Congress made the day a legal national holiday.

Amidst the sound of marching bands at city parades, the smells of an end of summer barbeque, noisy children playing near a picnic spread, or just the tranquility of reading a favorite book under the shade of an old tree, in whatever way Labor Day is celebrated these days, for most Americans the glorious meaning behind it never crosses their minds. But Albert Einstein may have captured its essence in the quote:


"A hundred times every day I remind myself that my inner and outer life depend on the labors of other men, living and dead, and that I must exert myself in order to give in the same measure as I have received and am still receiving." [3]


Someone once said God must love the working stiff more than others because he made so many of them. D. Elton Trueblood echoed this sentiment when he wrote:


"Wherever the gospel has been truly influential the concept of the dignity of work has emerged. The change of the conception of work as a curse to work as partnership with God owes more than we ordinarily realize to the witness of Christ. In the first place, far from being a parasite or one above the battle of toil, Christ was a carpenter and his followers were working men. The fact that he was identified with common life rather than a career in professional religion is fundamental to our understanding of him and his message. He seems to have turned deliberately from the priests to those who were hard working fisherman." [4]


Attitude is everything when it comes to work. The late TV announcer and second fiddle to Johnny Carson of the famed Tonight Show, Ed McMahon, was known as one of the hardest working men in show business. McMahon said that long before he achieved success in the entertainment field, he had once worked alongside his uncle who was a plumber. His assignment was to clean out the sewage pipes at the local Elks Club. McMahon said the work made him realize he could do any job on earth and be happy doing it – because any employment was a bed of roses compared to cleaning out sewage pipes. [5]

However, the Christian ethic for work provides an even greater incentive for happy labor. It teaches that we are all made in the image of God (Gen. 1:36). God is the infinite Creator, but he sets man over his creation as finite creators. We are to take what God has made and mold it, make it, shape it, and develop it in ways that make a difference for good. We do this through our toil. And when we do it in light of a partnership with God, our work, no matter our station, takes on a noble dynamic.

The apostle Paul referenced this principle when he instructed, "And whatsoever ye do in word or deed, do all in the name of the Lord Jesus, giving thanks to God and the Father by him" (Colossians 3:17). To the church at Ephesus Paul wrote admonishing slaves to serve their masters not "as menpleasers; but as the servants of Christ, doing the will of God from the heart; With good will doing service, as to the Lord, and not to men: Knowing that whatsoever good thing any man doeth, the same shall he receive of the Lord, whether he be bond or free" (Ephesians 6:5-7). 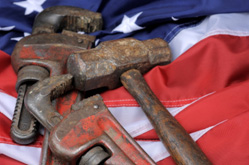 Jesus also referenced this standard for work with regards to himself, when he said, "I must work the works of him that sent me while it is day; the night cometh when no man can work" (John 9:4). In other words, even the Son of God, Christ, our Great Representative, had but a while to complete his work , his mission in life. The same is true for us. Every person has work to do for the Lord – work for which there will be an accounting at the Judgment.

The Christian work ethic is greatly needed in our day. It alone can guarantee a vibrant and ever-growing economy. It alone can deliver us from the overwhelming burden of the welfare ranks. It alone can deliver one from labor endured only for the sake of a wage. It alone can produce the kind of conviction needed to restore pride in workmanship, rather than just concerns with a bottom line. It alone can generate honest workers. Able to alter even the most menial task into a royal act, it alone results in a joyous consummation to life.

Honore de Balzac once said, "An unfulfilled vocation drains the color from a man's entire existence." [6] Indeed, this is true, but there is a remedy. When we surrender to God in Christ and are born-again to a new life in Him, the Bible says all things become new (2 Corinthians 5:17). Thanks be unto God that also includes our work.