Rev. Mark H. Creech
Stop just looking on and do something

September 12, 2015
In 1993, freelance photojournalist Kevin Carter from South Africa went to cover the civil strife in famine stricken Sudan. After his flight touched down in the village of Ayod, Carter captured an iconic image of a starving little girl, her face and body bowed low in the dirt, with a vulture in the background waiting for her to die. The emaciated toddler was struggling to find enough energy to get to a United Nations feeding center.

Carter said he had heard the child whimpering when he had wandered into the open bush. He confessed that after coming upon the scene he was careful not to frighten away the bird. Instead he waited for 20 minutes, hoping the vulture would spread his wings for the perfect shot. Still, the picture he got would win him a Pulitzer Prize.

The photo, which was first published in the New York Times resulted in a surprising public reaction. Hundreds of people wrote in wanting to know what had happened to the child, and queried as to whether Carter had done anything to help the youngster. The paper reported that what happened to the child was not fully known, prompting many to severely criticize Carter for staying aloof of the situation and not doing anything to help.

The St. Petersburg Times in Florida wrote of Carter: "The man adjusting his lens to take just the right frame of her suffering, might just as well be a predator, another vulture on the scene." The criticisms deeply disturbed Carter. Filmmaker Dan Krauss said, "In his famous picture of the vulture stalking the Sudanese girl," he started to see the embodiment of Carter's troubled psyche. "I believe Kevin did, too," said Krauss. "In the starving child, he saw Africa's suffering; in the preying vulture, he saw his own face."

Although Carter was struggling with numerous other issues of life, the haunting thought he might have done something for such a needy child, rather than just capitalize on an opportunity for the perfect picture, became more than he could bare. Only two months after winning the Pulitzer Prize, the 33 year old tragically committed suicide.

Wednesday, September 9th, a House hearing featured the testimonials of women who survived the kinds of abortion procedures that Planned Parenthood profits from every day. One of the women, Gianna Jessen, explained that her mother attempted to abort her when she was seven months into her pregnancy, but failed. Jessen said a bucket of formaldehyde in a utility closet was meant to be her fate. However, two nurses intervened and saved her life.

Jessen said, "[W]e will have to give an account, as a nation, before God, for our apathy and for the murder of over 50 million children in the womb. Every time we falter in courage as individuals and fail to confront this evil, I wonder how many lives have been lost in our silence...How many children have died and been dismembered, and their parts sold, for our ego, our convenience, and our promiscuity? How many Lamborghinis were purchased with the blood of innocent children?"

For weeks now the United States Congress has had the opportunity to do something about the egregious, Frankensteinian and butcherous acts of Planned Parenthood. Some Republicans are equivocating, while Democrats are hailing the so-called virtues of the discredited organization.

Pro-life warrior of many years, Jill Stanek, recently noted that "President Obama has a long-standing, super close relationship with Planned Parenthood, most clearly exemplified by his willingness in 2011 to shut down the federal government rather than allow the abortion giant to be defunded."

Stanek adds, "If Planned Parenthood loses that funding, which accounts for 41% of its $1.3 billion budget, it will be severely hobbled, if it doesn't collapse altogether. It will certainly be in no position to help its political friends." 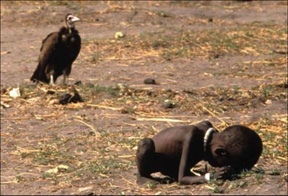 Indeed, and so the vultures hover and lie in wait. In this picture some even spread their wings proudly, while vulnerable and infinitely precious infants have the abortionist's knife hanging over them.

In the Gospel of Luke chapter 16, Jesus tells the story of a rich man who had the opportunity to do something about a helpless beggar at his door. Yet the rich man did nothing and would later find himself tormented with pangs of guilt in the fires of hell.

Dante Alighieri said, "The hottest places in hell are reserved for those who, in times of great moral crisis, maintain their neutrality."

But it's not just the government that needs to do something about the wanton and wicked practices of Planned Parenthood. Each of us should ask ourselves, "What have I done to stop this madness?"

Not long ago a woman was telling me about a conversation she had with a relative who had decided to terminate her unwanted pregnancy. She said she implored the woman not to do it. She reasoned as best she could with her about the matter. She shared Scripture with the young woman, prayed with her, and even offered to help and always be there if she would only have her baby. The pregnant woman decided to keep her baby. Next week her child will celebrate his twelfth birthday.

The woman who had the courage to boldly and compassionately speak up for life was not a pro-life activist, minister, or some other religious professional. She was merely someone with conviction that saw an opportunity to make a difference and did. She told me her story with joyous exuberance. And the mother now says she is horrified she ever contemplated throwing away such an incredible gift.

A conscience plagued with remorse and blame from a glaring sin of omission can be the worst of torments, even leading to the desperation of suicide and the hellish fires of hope forever lost. Some are headed that way, but Christ can redeem every situation with joy unspeakable. Still, we have to speak up, we have to engage, we have to stop solely looking on and do something!