October 24, 2015
Proponents for the legalization of recreational marijuana have said over and again that marijuana is less harmful to society than alcohol and tobacco. Thus, it makes no sense; it's even hypocritical to keep it illegal, they say.

To argue marijuana is harmless goes against some of the most reputable studies from Europe and the United States. Moreover, only two years ago, the nation's largest medical group, the American Medical Association, explicitly stated that they oppose legalization, rejected calls for them to become "neutral," and advocated for full funding of the Office of National Drug Control Policy. The American Psychiatric Association has also issued a statement outlining the many public health harms of the drug. [1]

But Bennet and White go on to ask, suppose the premise is right that marijuana is not as harmful as alcohol and tobacco? That still wouldn't be a strong argument for its legalization? They add:


Even so, there are new questions now raised in the debate that make Bennet and White's argument even more pertinent and valid.

In a recent article titled, "Mixing Alcohol and Marijuana," written by Pamela Erickson and Lisa Gervais of Healthy Alcohol Marketing, the two argue that as recreational marijuana becomes legal in more states it is more likely people will use marijuana with alcohol. This scenario poses an entirely new category for serious health risks and additional social costs.

"What research there is suggests that alcohol and marijuana together can intensify the effects of both," they contend. [4]

Alcohol has been shown to "increase the level of marijuana's main psychoactive ingredient, THC, in the blood stream," maintain the authors. [5] This presents further concerns about an increased heart rate combined with lower judgment and the dangers this sets for driving and a host of other activities.

Marijuana is also an "anti-emetic," which some chemotherapy patients have used to help control nausea and vomiting. But what happens if someone consumes too much alcohol while using marijuana? It means the purge to vomit can be suppressed and the vulnerability to alcohol poisoning is much greater, suggest Erickson and Gervais. [6]

"What about the impact on the adolescent brain?" they ask. The scientific evidence that alcohol is damaging to a teen's brain is clear. So is the evidence that even the casual use of marijuana "can change the chemistry and function of developing brains." [7] The use of both by teens seems to suggest a recipe for trauma to a youngster's intellectual potential.

"Another issue is the development of products such as [marijuana] edibles. Levy Thumba, a Wyoming college student visiting Denver, ate 6 times the recommended amount of a marijuana-laced chocolate bar, became incoherent and threw himself over a 4th floor railing to his death," say Erickson and Gervais. "And then there's the experience of New York Times writer Maureen Dowd who was in Colorado to report on the phenomenon of legalization. She ate a candy bar in her hotel room which resulted in her laying 'curled up in a hallucinatory state for the next eight hours,'" they add. [8]

The point is well taken. The potency of alcohol products varies greatly, from relatively week to very strong. Studies demonstrate marijuana potency has been increasing since the early nineties.

"The potential for harm of mixing high potency alcohol and marijuana products is truly frightening!" declare Erickson and Gervais. [9] 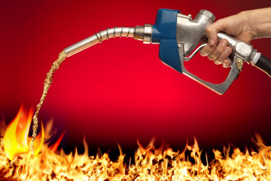 One thing is for certain, the legalization of marijuana like the repeal of Prohibition on alcohol will only increase marijuana's use. Marijuana use alone will establish its own carnage. But the simultaneous use of both alcohol and marijuana, which unquestionably will occur with great frequency, will be like throwing gas on a fire.

Tobacco tenders an egregious hazard to public health. While its stinking fume has killed millions, it's not a mind altering drug like alcohol and marijuana. Tobacco kills, but no man ever beat his wife and children or maimed someone because of his culpability in an automobile accident or murdered because he had too many cigarettes. Tobacco destroys the body, but alcohol and drugs attack both the body and the soul.

Revelation 18:23 seems to allude to our own time, stating, "For by thy sorceries were all nations deceived." The word translated "sorceries" in the text comes from the Greek word, "pharmakeia" – the same word from which the English word "pharmacy" comes.

In other words, the text is foretelling a time when the nations will be enchanted with drug use. It foretells their doom. Moreover, it provides a warning for individuals and society to resist and not be deceived.

Tobacco and alcohol have already robbed this country of too much. To add marijuana as a legal commodity only accelerates our speed towards the precipice.

[2] Bennett, William J., and Robert A. White. Going to Pot: Why the Rush to Legalize Marijuana Is Harming America. Pg. 144