November 22, 2015
Recent weeks have clearly shown that Islamic terrorists are successfully recruiting, growing their networks, and executing their carnage around the globe. Can they be stopped?

It should be of great concern that whether Republican or Democrat, most of America's leadership still doesn't get it. The threat is not simply from a fringe movement that has perverted the religion of the star and crescent. The enemy is Islam.

There, I said it. And, as surely as Martin Luther declared at the Diet of Worms, "Here I stand." I do the same regarding this issue of our time. Moreover, I believe more clergy must do likewise if our nation is to survive this crisis.


"Satan is real. And Satan's intent is to destroy the human race. Sin exists, and there are things of this world that are objectively evil. The Muslim world may believe what they live, but in reality, they are bound in sin, evil and Satanic delusion. All of the liberal, politically correct, pluralistic 'spin' cannot change the dark nature of Islam. The longer American pulpits are silent on this – and the longer that U.S. leaders coddle Islam – the more lives will be lost and the greater the likelihood that Islam will continue to undermine American security. Our leaders must recognize the truth about Islam, and preachers need to lead the way in calling their people to know the truth about Islam, pray for world peace and pray for the conversion of Muslims."


Robert Spencer in his book, Islam Unveiled, rightly argues that it is true all three monotheistic faiths (Judaism, Christianity, Islam) have been stained at various points throughout history with murder and mayhem, but Judaism nor Christianity have any equivalents today to terrorist groups such as ISIS and al-Qaeda. Islam has a long, sordid, and predominant history of violence from ancient times to the present.

How can it be said with authority that the religion of Islam is the enemy?

To determine the nature of the religion one only needs to consider its founder, Muhammad. Muhammad was barbaric in his military exploits, making no distinction between combatants, noncombatants, women and children. He raided and pillaged to finance his movement and showed no sympathy for his critics, executing them without mercy.

In most cases, he didn't convert people to Islam, but coerced them into submission. They could choose Islam, die, or pay tribute.

Muhammad taught: "Fight and slay the pagans wherever you find them and seize them, beleaguer them, and lie in wait for them, in every stratagem of war" (Surah 9:5). Such words of hate and malicious intent are the very spirit that drove the killing machine in Paris, as well as other victimized locations.

The Turkish soccer fans in Istanbul that booed and chanted "Allahu Akbar" during the moment of silence for the victims of the Paris terrorist attack are the people who believe Muhammad was a noble man they should emulate.

Let's not forget that the enormous empire Muhammad carved out in the world didn't stop expanding because the followers of Islam had a change of heart along the way. No, it stopped only because of European military might.

Spare me the angry letters, emails and phone calls saying your Muslim neighbor isn't a bomb-toting fanatic. That's not the point. Everyone knows all adherents of Islam aren't militant jihadist, but not everyone understands Islam itself is the mother-load of dangerous religious ideas. Violence and world domination are at the heart of its teachings, which are best exemplified in its founder, Muhammad. 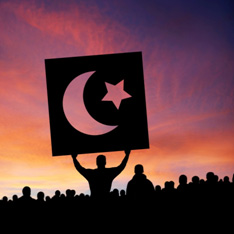 If we can't identify the real enemy, we can't win this war against the free world. A secularist nation with a secularistic approach to addressing this threat cannot have the wisdom or the stamina necessary for what is likely to be a protracted fight for many years to come.

If America is to beat back the terrorists, better still if the West is to stop this brutal aggression, it must rediscover its Christian roots. There must be a renewal that clarifies its history, and the Christian foundation of its institutions and traditions. Otherwise, Islam is poised to fill the gap.

For those who claim my remarks are bigoted and intolerant, my response is that Muslims are welcome to practice their religion freely in this country because of America's Christian heritage. Islam affords no such freedom to any other religion.

Islam is the enemy.