December 6, 2015
Back in October, sixty-five legal experts of high repute issued "A Statement Calling for Constitutional Resistance to Obergefell v. Hodges" – the Supreme Court case that ruled in favor of gay marriage.

In the statement the legal scholars rightly accuse the High Court of eschewing "reliance on the text, logic, structure, or original understanding of the Constitution, as well as the Court's own interpretive doctrines and precedents." Moreover, they argue that the Court failed to show any compelling reason for "why it is unjustified for the laws of the states to sustain marriage as it has been understood for millennia as the union of husband and wife."

Therefore, their statement called upon all federal and state office holders to:


(1) Refuse to accept "Obergefell" as binding precedent for anyone except the specific plaintiffs named in the case.

(2) Recognize the authority of the states to define marriage.

(3) Pledge full and mutual legal and political assistance to those who refuse to accept "Obergefell" for constitutionally protected reasons.

(4) Open a broad and honest conversation on the means by which Americans can constitutionally resist and overturn the decision.


The conclusion of the statement, perhaps, may be its strongest point. It reads:


"To treat as 'settled' and 'the law of the land' the decision of five Supreme Court justices who, by their own admission, can find no warrant for their ruling in the text, logic structure or original understanding of the Constitution, would indeed be to resign our government into the hands of that eminent tribunal. That is something that no citizen or statesman who wishes to sustain the great experiment in ordered liberty bequeathed to us by our Founding Fathers should be willing to do."


Kim Davis, the Rowan County Clerk in Kentucky who refused to sign marriage licenses for same-sex couples has been the poster child for resistance to the Supreme Court's decision. Davis declined to sign the licenses with her name affixed to them because her Christian convictions informed her that same-sex marriage is an affront to the authority of God. She even spent a brief stint in jail for standing firm on her religious beliefs.

Since then, Kentucky Governor-Elect, Matt Bevin, has promised that one of his first actions as Governor will be to remove the personal names of county clerks from marriage licenses, which will allow many of them to keep their jobs without compromising their faith.

Davis' legal counsel says this will resolve all the legal efforts on her behalf and refers to it as a victory for religious liberty. And indeed it is!

In North Carolina, the General Assembly passed legislation this year that allows magistrates and register of deeds that hold a sincere religious objection to same-sex marriage to opt-out of the performance of civil ceremonies. Before the passage of this measure, these public officials were facing termination and even the threat of criminal prosecution for refusing to violate their consciences.

As executive director of the Christian Action League of North Carolina, and a registered lobbyist for the organization, I worked closely with lawmakers to get the bill passed. North Carolina Gov. Pat McCrory, a Republican, vetoed the bill, but the General Assembly overrode his veto. That legislation too was a great victory for religious liberty.

Nevertheless, I am concerned that achievements of this type are still but a position of retreat. Same-sex marriage was oppressively imposed by an immoral and unconstitutional court ruling. Our nation's primary need is what "The Statement Calling for Constitutional Resistance to Obergefell v. Hodges" advocates public officials should do.

Legislation referred to as the "Tennessee Natural Marriage Protection Act" has been introduced in the Tennessee General Assembly that would sufficiently address these concerns. It reads: 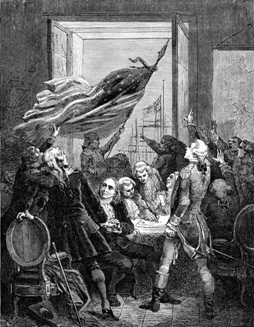 Matt Trewhella has written extensively on the Doctrine of the Lesser Magistrates – the biblical principle colonialists employed to defy the tyranny of King George during the American Revolution. He beautifully argues:


"True federalism understands that all magistrates – whatever their level or sphere of jurisdiction – possess lawful authority. And that whenever one branch of government begins to play the tyrant – all other branches (whether federal, state, county or local) have the duty then more than ever to uphold the Constitution and oppose that branch – even if that branch is the Supreme Court."


These are extraordinary times calling for extraordinary leadership. Without the kind of steel resolution, moral fortitude, and commitment to our nation's Constitution called for in "A Statement Calling for Constitutional Resistance to Obergefell v. Hodges," the tyranny of judicial supremacy will expand until freedom is but a sweet word of days-gone-by.

For those who might argue such action by our leaders would produce a constitutional crisis of monumental proportions, I say, we already have one.