June 19, 2016
I adored my father. Everything I have ever written about my relationship with him has been positive. Still, our bond was not always so tight. In fact, it was so strained at one point; I didn't speak to him for two years. I was angry for both real and perceived slights.

This was a sad period. There was estrangement between me and my father, estrangement between me, my immediate family, and extended family members. There were no visits on holidays, no phone calls, and certainly no "Happy Father's Day" wishes on that special Sunday. I was so certain that I was right and justified in my anger, and this probably would have continued indefinitely except something happened.

My relationship with my daughter deteriorated. She was in her teens, 17 to be exact, and rebellious. She had kept her waywardness well-hidden from her mother and me. By the time I discovered it, my attempts to correct her course seemed to have just the opposite affect intended. I tried to cut her off from a group of friends that I believed were a bad influence, but she would ultimately leave our home and run away with them.

It was devastating. One day, I was so sorrowful and distraught I dropped to the floor on my knees and prayerfully begged God in tears to bring my daughter home.

It was then God spoke to me powerfully. What I heard in my head and heart was as near to an audible voice as one might expect to hear in faith. In my distress, God said, "Mark, why should I bring your daughter home, when you haven't spoken to your father in two years? Go and be reconciled with your father."

So terribly under conviction from the experience, I rose up immediately and made my way to where my mother and father still resided at the home of my childhood.

When I pulled the car into the driveway, I could see my father and sister doing some work in the backyard. They both paused for a moment, trying to make out from a distance if it was really me. Within seconds they both came running, while I hurried toward them. When we reached one another, we fell into each other's arms and the only thing we could do for the longest time was just stand there together and weep.

Strangely, every wrong I felt I'd suffered that had precipitated the crisis between me and my Dad didn't seem to matter anymore. The family was ultimately re-united in every sense, and months later my daughter would also come home. Love, grace, and mercy had conquered all.

Those days were some of the most painful in my life, but the many deep spiritual lessons I garnered from that incident were priceless.

First, the circumstances impressed upon me as never before God's command to honor our parents. The Fifth Commandment reads, "Honor thy father and thy mother."

Someone might quickly say, "Well, you don't know my parents. They aren't honorable."

Yes, I know the feeling. I felt that way about my father during the time we were separated, but that's really irrelevant to the command. If you and I were to stand before the bar in a courtroom, we would address the judge as "Your Honor." That expression actually says nothing about the kind of person the judge is, but we do it because we are required to recognize the authority of the judge's position. God commands us to always honor our parents, if for no other reason than God has made them our parents.

We typically pass through four stages in our relationship to our Moms and Dads. We idolize them when we are small. "My Daddy is the greatest in the world. He can do anything!" As we grow older and see their faults as teens, we tend to demonize them. We see them as the source of every misery in our life. Next, we utilize them. Our relationship is based almost entirely on what we can get out of them. Hopefully, we reach the fourth stage where we humanize them. We realize that they are neither God nor the devil or something to be used, but only human just like us. They are both weak and strong, both good and bad.

Third, I discovered you can be an adult child in your forties and beyond but if you harbor past objections against one or both parents, you need to put them away and forgive. It's imperative you do this as quickly as possible. 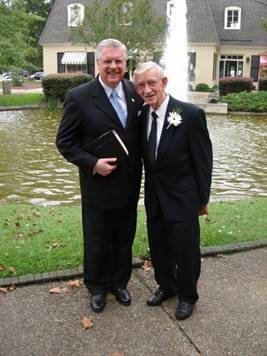 "Of the seven deadly sins, anger is possibly the most fun. To lick your wounds, to smack your lips over grievances long past, to roll over your tongue the prospect of bitter confrontations still to come, to savor the last toothsome morsel both the pain you are given and the pain you are giving back – in many ways it is a feast fit for a king. The chief drawback is that what you are wolfing down is yourself. The skeleton at the feast is you."

Lastly, the Gospel of Luke, chapter 15:11-24, records one of the most sublime stories Jesus ever told, The Prodigal Son. It's a story about a young man who separated himself from his father into a foreign land, and squandered his inheritance with reckless living. Having lost everything and realizing the great error of his ways, humiliated, he went home with a repentant heart. The Bible says when his father saw him coming at a distance, he ran to meet him. Rather than shaming his son as one might naturally expect, instead the father threw his arms around him, kissed him, and ordered for an extravagant celebration.

That story is really as much about God, the Father, as it is about a prodigal. It shows that despite our sins, God's love for us is boundless, profound, reconciling, and unreserved. Our relationship with Him can be restored in an instant when we come to the end of ourselves, take responsibility for our misdeeds, and go home to Him who has been eagerly longing for our return.