July 11, 2016
I never really noticed it before. You know, when you're on a flight and the airplane you're on takes a steep bank turn – even if the wings are perpendicular to the ground – you're beverage won't spill. The book or magazine you're reading will drop straight to the floor. The stewardess will walk upright down the aisle as though the plane was still level. And unless you look outside the window, you can't tell which way the plane is turning. I'm told that's because of something called "inertia."

Pilots are subject to the effects of "inertia." When flying an aircraft through the clouds or fog and unable to see the horizon, they can't feel when the plane is banking either to the right or the left. As a matter of fact, in the early days of flight, many pilots lost their lives because they followed the myth of their instincts. Trusting only their senses and thinking they could feel the turn, whenever they unexpectedly were engulfed in a thick blanket of haze, tragically many banked into a spiral dive that ended in a crash.

To fly safely through the clouds, pilots have to use their instruments. A "gyro horizon" is a flight instrument to inform pilots of the orientation of their airplane relative to the earth's horizon. It gyroscopically steadies the line that stays level with the earth's surface and unerringly indicates when the plane's wings are banking either left or right.

The "gyro-horizon" revolutionized aviation, but when it was first invented pilots defied it. Their biggest problem was faith. They trusted their feelings, their own instincts, more than their instruments. [1]

The Scriptures, the Bible, is God's primary flight instrument for life. Our feelings, our instincts, our own subjective reasoning, can mislead us, but God's Word is always trustworthy.

The prophet Jeremiah warns, "The heart is deceitful above all things, and desperately wicked: who can know it?" (Jer. 17:9). Proverbs 14:12 reads, "There is a way which seemeth right unto a man, but the end thereof are the ways of death."

I thought about these things while listening to news reports on the shooting in Dallas that left five police officers dead and seven more wounded. CNN called it "the deadliest single incident for U.S. law enforcement since September 11, 2001."

Sniper fire interrupted a peaceful protest over police shootings in Minnesota and Louisiana, creating a scene of chaos with protestors scrambling for cover.

For several hours police were locked in a standoff with shooter Micah Xavier Johnson (25), after cornering him on the second floor of a downtown building and attempting to negotiate with him. When negotiations failed, Dallas police were forced to take Johnson down with an explosive device on a bomb robot.

During negotiations Johnson told police he was angry about recent shootings of black men by police elsewhere in the U.S. He said he hated white people and wanted to kill them, especially white police officers.

The President said the shooting highlights the need for gun control laws. Activist Jesse Jackson blamed Republican Presidential candidate, Donald Trump, and his followers for raising a climate of fear in America. Trump's Virginia state campaign manager took to social media and blamed Democratic Presidential candidate, Hillary Clinton. No doubt, some will blame the Black Lives Matter movement, but the source of the problem is much deeper than any of these shallow explanations.

A quote from James Q. Wilson's book, The Moral Sense, best addresses the heart of our nation's crisis with numerous mass shootings. He writes:

"Over the course of the last hundred years the world has experienced a shift from an era in which crime chiefly responded to material circumstances to one in which it responds in large measure to cultural ones...The moral relativism of the modern age has probably contributed to the increase in crime rates...It has done so by replacing the belief in personal responsibility with the notion of social causation and by supplying to those marginal persons at risk for crime a justification for doing what they might have done anyway. If you are tempted to take the criminal route...you may go further along that route if everywhere you turn you hear educated people saying – indeed 'proving' – that life is meaningless and moral standards arbitrary." [2]

Something the former pastor of Moody Church in Chicago, George Sweeting, wrote nearly four decades ago is also quite pertinent. Sweeting said: 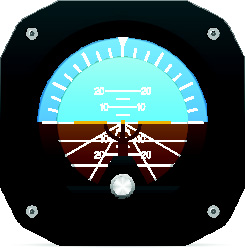 "We have lost much of our basic trust in God. No longer do we clearly see His wisdom, power, and love. We have put our trust in men and they are failing. We have laid aside the Bible, not only in our schools, but in our homes and in our public life as well. Small wonder that we have lost our concept of sin, our condemnation of wrongdoing. Bloodshed and violence fill our land. Again and again, we have affirmed the rights of men at the cost of God's rights. We have sold our godly birthright for humanism's pottage." [3]

What incredible descriptions by both authors of our nation's moral decline!

The fact is society can bank too far to the Left and sometimes even too far to the Right, but God's "gyro-horizon" – His revelation of Himself and His will in the Bible – can unerringly steady us to His immovable and eternal horizon. We just need to put away our pride and arrogance, stop trusting in our own ways, and believe.

Without navigating our personal and national lives by the sound principles of Scripture, we are subject to spiral down, crash and burn.