August 6, 2016
Was it simply a faux pas? Was it ignorance? Or was it intentional? These were the questions running through my mind as I listened to Hillary Clinton's acceptance speech at the Democratic National Convention (DNC).

After mentioning that she and other Democrats were meeting in Philadelphia, the nation's birthplace, Clinton briefly talked about the struggle that our nation's 13 colonies had in coalescing around the shaping of our Republic. "The revolution hung in the balance," she said, but they found "common purpose."

"Our Founders embraced the enduring truth that we are stronger together," she declared.

She then added, "America is once again at a moment of reckoning. Powerful forces are threatening to pull us apart. We have to decide whether we will work together so we all can rise together. Our country's motto is 'E Pluribus Unum: out of many we are one.' Will we stay true to that motto?"

Anyone with a fair and objective mind would have to admit she gave a good speech. It was largely about Americans uniting in common cause to overcome their many challenges. Nevertheless, in my opinion, the speech suffered a fatal flaw – one that undermined its entire premise. The fact is, "E Pluribus Unum" is not our National Motto. It never received congressional recognition as such. Instead our National Motto is "In God We Trust."

Officially approved by Congress in 1956, the nation's motto was drawn from the last stanza of the National Anthem, which reads:

"And this be our motto: 'In God is our trust'
And the Star Spangled Banner in triumph shall wave
O'er the land of the free and the home of the brave"

In a 2014 article titled, "In God We Trust v. E Pluribus Unum," Universal Coin and Bullion President, Mike Fuljenz, rightly says that while "E Pluribus Unum" is "meaningful in explaining the nation's origin," the phrase "In God We Trust" conveys something deeper. It "expresses American's deep, abiding faith that a higher power has guided the ship of state on its several century journey through human history's often stormy seas."

Clinton's error is no matter to be taken lightly because there has been a significant movement in recent years, mostly coming from the Progressive camp, that's trying to remove God from every part of public life. You might call it a new revolution – a revolt against America's Christian heritage – one based on anti-biblical values – one that indicts religious traditionalism as the oppressor of people's rights.

Presidential candidate Clinton often speaks affectionately about the positive influences of her Methodist background. Yet she is the same woman who said at the 2015 Women in the World Summit: "Laws have to be backed up with resources and political will. And deep-seated cultural codes, religious beliefs and structural biases have to be changed."

These words sound more like someone prepared to lead an insurgency that will intimidate, litigate, and use the power of the state to marginalize the expression or influence of a conventional Christian worldview in the national life.

Such words also sound too close to the 2008 Democratic Party's nominee for President, Barrack Obama, who stated in a veiled promise his plan to bring "fundamental change" to America.

In 2010 as President of the United States, Obama also incorrectly identified "E Pluribus Unum" as the National Motto. When congressional members sought to clarify our real National Motto via a resolution, the President just dismissed the matter as a politically motivated distraction from the more important work of building the economy.

Unprecedented in the history of our country has been the Obama administration's acts of hostility toward Judeo-Christian values and the people who embrace them.

Are God-fearing and patriotic Americans to expect a continuation of the same under a Hillary Clinton Presidency?

It would at least seem that Clinton intends to pick up the baton and lead what Mary Eberstadt has termed, "the progressive-secular alliance."

In her new book, "It's Dangerous to Believe," Eberstadt describes the current cultural and political climate in this way:

"Cultural changes coupled with technological ones – chiefly, the amplification made possible by social media – have empowered an anti-religious minority and enabled it to pursue and punish the believers...They are the guardians of what has become a secularist substitute faith..."

Nowadays it is "[b]elligerent secularism" that is the real oppressor of the people's rights, says Eberstadt. Progressive activists shame and punish dissenters to this substitute faith by "multifaceted legal and other attacks." The irony of the situation she argues is "[t]oday's ongoing attempt to drive believers out of the national conversation is not only inegalitarian. It thoroughly contradicts progressivism's claim to value social and intellectual diversity."

America's unity, however, in the pursuit of liberty has traditionally found its inspiration in the shared conviction there is a Sovereign God to whom all men are accountable. We commonly have held that God gives everyone inalienable rights – rights the state, no man or woman, can justly deprive without due process. Our civil liberties, whether freedom of conscience, freedom of religion, freedom of expression, freedom of assembly, the right to life, the right to a fair trial, the right to own property, etc., are a by-product of the Christian religion.

The late Dr. D. James Kennedy said it quite eloquently: 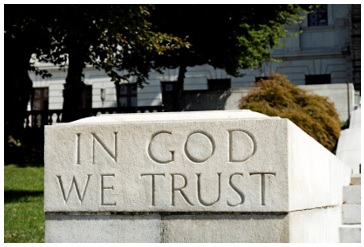 "Jesus Christ is the great emancipator in the history of the world...Christianity first set people free from the shackles of sin. Then, having experienced spiritual liberty, there was set in motion an inevitable quest for civil liberty as well. In the United States, where Christianity had its greatest impact, we have experienced civil liberties of a form and degree that had never been seen in any other country in the world."

Throughout time, whenever nations, tribes, and tongues, have banded in a mutual cause to build a society without God, it has inevitably ended in despotism, elitism, or both. No matter how high-sounding the rhetoric it never leads to the promise of greater freedom or equality, but instead factions, inequality, and bondage.

Why did Hillary Clinton state incorrectly our National Motto as "E Pluribus Unum" rather than "In God We Trust"? Did she just make a mistake? Or does she hope to plunge America further into the baptismal waters of its "secularist substitute faith"?