October 30, 2016
Tim Walter, in a sermon titled, Filled with God's Grace and Power, said, "Golden calves are built in every generation..."

We don't seem to see it that way. We mostly think of idolatry as something long abandoned to the past. But just as sure as the gods of the Egyptians, the Canaanites, the Babylonians, the Assyrians, and the Romans of yesteryear clashed with the bearers of true religion, it is no less true today.

The Ninth Circuit Court of Appeals upheld a California law that requires pregnancy resource centers to promote abortion or face the wrath of the state.

In Iowa and left-leaning Massachusetts, churches have filed lawsuits challenging new transgender non-discrimination laws that require them to allow persons to use a restroom, shower or locker room, opposite to their biological sex. The law singles out and penalizes these churches if they won't comply.

A Lay minister in Georgia, who filed a lawsuit on the grounds of religious discrimination after losing his job with the Georgia Department of Public Health, is now being compelled by the state's attorney general to hand over his sermons. His problems started after being hounded by LGBTQ activists for preaching what the Bible says about homosexuality.

The situation is appalling and leaves many Americans scratching their heads and wondering how we got to where we are – something they never thought they would see in their lifetimes.

In her book, It's Dangerous to Believe: Religious Freedom and its Enemies, Mary Eberstadt, explains our nation's descent into the abyss.


"For more than a half century now, at least since the invention of the birth control pill, men and women of the West, especially secularists and progressives, have collectively assembled...an orthodoxy, thinkingly or no. In place of the Judeo-Christianity of yesterday, and mimicking its outlines to an uncanny degree, this new body of belief has by now a well-developed secular catechism. Its fundamental faith is that the sexual revolution, that is, the gradual destigmatization of all forms of consenting nonmarital sex, has been a boon to all humanity...

"It follows...that traditional moral codes represent systems of unjust repression. In the new dispensation, traditional restrictions and attitudes are viewed as judgmental, moralistic – even as forms of socially sanctioned aggression, especially against women and sexual minorities. In this profound and still-unfolding transvaluation, yesterday's 'sinners' have become the new secular saints; and yesterday's 'sins' have become virtues, as positive expressions of freedom...

"[I]mperatives are that whatever contributes to consenting sexual acts is an absolute good, and that anything interfering, or threatening to interfere, with them is ipso facto wrong...

"Note the absolutist character of these beliefs as they play out in practice. For example, it is precisely the sacrosanct, nonnegotiable status assigned to contraception and abortion that explains why – despite historical protestations of wanting abortion to be 'safe, legal, and rare' – in practice, secularist progressivism defends each and every act of abortion tenaciously, each and every time...this new faith will not even draw the line at what is known as 'partial-birth' abortion...

"It is only if we understand the quasi-religious impulse behind the tenacity with which each and every abortion is defended that the otherwise puzzling, resolutely uncompromising character of the 'pro-choice' position makes sense...

"Christianity present, like Christianity past and Christianity to come, contends with many foes and countervailing forces. But its single most powerful enemy now is not the stuff of the philosophy of the common room. It is the sexual revolution – and the current absolutist defense of that revolution by its adherents and beneficiaries...

"The followers of this newfound code further accept as the equivalent of Holy Writ a canon of texts and doctrine – a body of literature and commentary that cannot be questioned without risk of excommunication...'if you are against abortion, therefore you are anti-woman'; 'if you believe in Christian teaching, therefore you hate people who endorse same-sex marriage'...

"Foundational to today's secularism/progressivism is the doctrine that the Pill and its back-up plan, abortion on demand, have liberated humanity – first, by freeing women from the chains of their fertility; and second, by having broken down the door to the fortress of traditional morality, after which one sexual minority after another has also been liberated. This, in a nutshell, is the new secularist faith, and in various influential quadrants, it is the culturally dominant narrative of our time...

"The so-called culture war, in other words, has not been conducted by people of religious faith on one side, and people of no faith on the other. It is instead a contest of competing faiths: one in the Good Book, and the other in the more newly written figurative book of secularistic orthodoxy about the sexual revolution."


Dr. Billy Graham has written, "When a nation turns from the true and living God of its Christian heritage, then it substitutes false gods."

This new secularist faith is in essence idolatry. Its face is as dark and bloody as Moloch of Israel's later days, demanding her children for sacrifice. It is as aberrant as the deities of ancient Rome and the licentious rites associated with them, referenced by the apostle Paul in Romans chapter one. Its objective is to overthrow traditional Christian teaching, making it subordinate to abortion and LGBTQ rights.

It is the war of the ages. It started in Genesis 3:5 when the serpent tempted Adam and Eve to reject God's sovereignty and be their own gods, and it ends with the declaration of Revelation 21:8, "Idolaters...shall have their part in the lake which burneth with fire and brimstone." 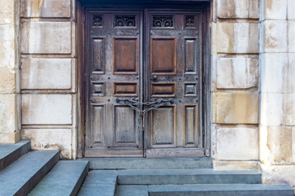 No matter how much this idolatry advances, like all false gods, its destiny is the ash-heap of history.

God will spare from judgment the repentant. There's still time to turn to him and receive his grace and mercy in Christ.

Religious liberty cannot be separated from its Christian roots and survive. Moreover, religious liberty is at the heart of all other freedoms. It's still not too late to save freedom.