December 18, 2016
It was both disappointing and frustrating recently to learn what the Freedom From Religion Foundation (FFRF) had done. Their bullying tactics, threatening possible legal action if a school choir from the Wake County school system (North Carolina) sang in a local nativity event, had frightened school authorities into canceling their participation.

School choirs had been performing at the festivities for years, but because an official from the church that hosted the celebration said it was "an opportunity to share the wonder and love of the Savior," FFRF argued it created the perception of an endorsement of religion by the school. "Schools must not participate in overtly religious events," insisted the non-theist group.

In an email sent in response to my inquiry on the legalities of the matter, Mast said, "School districts should not ban sacred music from choir repertoires, nor choirs themselves from singing in sacred venues. Both are constitutional, provided the intent of the district for doing so is for valid secular reasons, like appreciation of diversity, whether in art, culture, or music."

Mast continued that there was no indication the Wake school "district had an improper purpose here, no matter the subjective intent or hopes of the venue's hosts."

Certainly this addressed the question of what's permissible by law, but I couldn't help asking myself something deeper: "What is it that makes these people, the people who make up FFRF, the people who are a part of other groups like them, so bent on keeping Christmas out of the public square?"

I've heard all their feigned noble pontifications about keeping church and state separate. I don't believe a word of it. That's not really their motive. I also question in light of American history and our voluminous documents that link this nation and its form of government directly to Christianity, how they could possibly espouse their radical view. If they had their way, they would scrub every reference to God and nullify every vestige of religious influence from our national life. No, I think their opposition is rooted in something much more fundamental – something more basic to human nature.

Denis Waitley, in Seeds of Greatness, provides an illustration.

Waitley says a lady had taken her five-year-old little boy shopping at a large department store during Christmas, hoping it would be fun for him to see all the decorations, window displays, and Santa Claus. As she was dragging him by the hand, twice as fast as his tiny legs could go, he started fussing and crying. "Good heavens, what on earth is the matter with you?" she asked him impatiently. "I brought you with me to get in the Christmas spirit. Santa doesn't bring toys to little crybabies!"

His fussing was incessant while she looked for some last minute Christmas bargains. "I'm not going to take you shopping with me ever again if you don't stop your whimpering!" she quipped. "Oh well, maybe it's because your shoes are untied and your tripping over your laces," she thought, as she got down into the aisle to tie his shoes.

Kneeling beside the little fellow, she happened to look around and for the first time see the department store from the same vantage point as her five-year-old. From that position, there were no beautiful lights, no presents, no gaily decorated trees or displays, no animated toys. All that was possible to view was a maze of corridors too high to see above, full of giant legs and tremendous posteriors.

Waitley writes, "These mountainous strangers, with feet as big as skateboards, were pushing and shoving and bumping and thumping and rushing and crushing." Rather than fun, the scene was most disconcerting. So the mother decided to take her child home.

On her way out of the store, she noticed Santa Claus seated in a pavilion decorated like the North Pole. Perhaps letting her boy meet Santa would redeem the day for him, she reasoned.

"Honey, go stand in line with the other children, and then sit on Santa's lap," she instructed the child, "Tell him what you want for Christmas, and smile while you're talking so I can get a good picture." 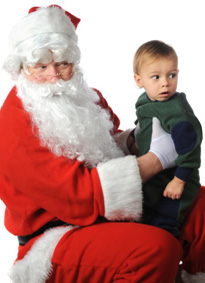 When the strange-looking man with the beard, glasses, and red suit, obviously stuffed with pillows, hoisted the little guy onto his lap, he let out a big laugh and tickled the boy in the ribs.

"And what would you like for Christmas, son?" Santa boomed quite jovially.

"I'd like to get down," was the youngster's response.

In my estimation, people who have no religious appreciation for Christmas are like that little boy. They feel as though they're being dragged into something they don't really understand and they often resent it – deeply.

They are, unfortunately, spiritual pygmies, having never developed. Consequently, they are also emotionally infantile and fussy crybabies. From their perspective, they cannot see the beauty of the occasion, but only what is most base – only the "pushing and shoving and bumping and thumping and rushing and crushing" of the holiday season. They just want to get off or to get down.

Moreover, like a little child that envies the pleasure another finds with a toy, they would take it away. If they can't experience its happiness, neither should someone else. At least, not unless they say so.

We must never abandon the fight to preserve our unalienable rights to religious liberty. We must preserve the spiritual foundations of this nation celebrated in national holidays as Christmas and Easter.