March 6, 2017
There is a finding from a new national survey by the American Culture and Faith Institute (ACFI) that's very encouraging. The survey shows that SAGE Cons, which stands for Spiritually Active, Governance Engaged Christian conservatives, are more than dismayed about the demise of American culture and the vast majority of them want to do something about it.

According to ACFI, SAGE Cons account for around 10% of the nation's electorate and a whopping 95% of them say "they are not satisfied with the current state of American culture." This "dissatisfaction fits with their concern about the direction of the country; the ineffective performance of government; their disappointment and lack of trust related to major institutions; and their worries about the state of the family."

ACFI went on to report that the "unflattering national portrait" found that "two out of three SAGE Cons (67%) said they were 'extremely' or 'very' interested in being personally involved 'in activities designed to produce positive cultural transformation in the US in the near future.'"

This is tremendously good news! It's especially good when you consider we've had decades of most church leaders, even conservative Christian leadership, discouraging parishioners from getting involved in politics. Instead, they've stressed Christians need to be focused on things of a spiritual and eternal nature, and not the temporal and transient affairs of this life. Unfortunately, their view, I believe, has been most short-sighted and fails to see the full orb of the Gospel message.

Harry Blamires, in a 1983 Guideposts publication, titled, On Christian Truth, has addressed this issue as good as or perhaps even better than anyone I've ever read. He has written:

"The most remarkable thing about Christianity is that it is not simply a supernatural religion. On the contrary it claims that God, who is maker of all things, is also the God who came to earth, lived a human life, and died a human death. Christianity is therefore a very remarkable religion indeed. In the first place it says, 'There is a state of being beyond time and space where God dwells eternally.' But it does not go on to say, 'So this life here in the natural order is not all that important. It is peripheral. It must be counted a trivial, ephemeral experience that passes away like a dream.' No, instead of that, Christianity goes on to say, 'But this world of space and time has been visited by God himself. He became one of us. He demonstrated indeed that our passing physical life here can be involved with his eternal life beyond and above the universe.'

"The conflict represented, rather crudely, by these alternative emphases, runs through Christian history. There is hardly a quarrel in the long story of Christendom that is not in some way a struggle between the competing claims of the supernatural emphasis and the natural emphasis of Christian teaching. The issue is with us today. And anyone who joins a church, of whatever denomination, will encounter it in some form."

It's time that we learn that it's not an "either/or" situation. It's both, and it's always been a balance between the "two seemingly competing emphasis," adds Blamires.

The late Dr. J. Robertson McQuilkin, former President of Columbia International University, once said in a Chapel message I heard when I was a student at that institution, "The will of God is often found in the center between two points of biblical tension."

George Barna, the researcher who performed the survey for ACFI, offered a challenge to Christian leaders to capitalize on the current energy of Christian conservatives (SAGE Cons) by seeking to organize, mobilize, and activate them in engaging the culture for Christ's sake. 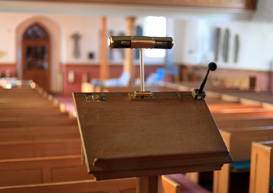 "The danger is that many Christian leaders appear to be waiting for the Trump Administration to work some magic to turn around the culture," he said. "The reality is that the complexity of modern cultures precludes any one leader or even a single sector of society from effectively producing wholesale, positive change in a short period of time."

Barna adds that what's really needed is a broad constituency of "Bible-based followers of Christ," who will be "responsible for pursuing a more comprehensive vision of a better society for all...Churches, families, parachurch organizations, conservative media, faith-friendly schools – all of these entities and more have a moment of opportunity to redirect the nation and to shape the future in different ways than have been the norm...But without effective and timely leadership, little progress will be made."