Brisson said in an interview with WECT that his constituents were rural and that he had been getting pressure from them for a few years to make the change. "I don't have a lot in common with the Democratic Party right now because they have become so liberal," he said.

NC GOP Chairman, Robin Hayes, said in a statement that Republicans welcomed Brisson's conversion "to a political party that will better serve himself and his constituents."

I couldn't agree with Hayes more, not so much because I am a Republican, but because I know Rep. Bill Brisson. He has not only voted with Republicans on key issues such as the state's budget, redistricting, and veto overrides, but he is a fine Christian man with strong Christian convictions. He's solid on the social issues – really solid. In fact, I'll venture to say that he will likely make a better Republican than some Republicans serving alongside him in the House.

I don't claim to speak for Rep. Brisson, but I suspect, knowing his love for the Lord and his unflinching commitment to a righteous culture, it became increasingly difficult to stay in a political Party that supports policies far removed from Christian teachings. In fact, I personally believe a lot of Christians who are in the Democrat Party should consider changing their registration.

The question is somewhat like the one an elderly parishioner of mine asked me many years ago when I paid her a pastoral call. She said, "Pastor, can I still dip my snuff and go to heaven?" I replied, "You most certainly can, but you'll have to go to hell to spit." My attempt at humor wasn't meant to say she would go to hell if she kept dipping. It was only a light-hearted way of trying to convey that her use of tobacco wasn't consistent with a better Christian walk.

Wayne Grudem, in Politics According to the Bible, accurately describes the wide gap between Democratic and Republican principles which he says "involve a person's entire worldview and deeper spiritual commitments."

Here's my summary of what Grudem says:


1. Liberal versus conservative views of government. Democrats represent a group who favor more government control of individual lives and government-enforced equality of income. Republicans typically believe in smaller government and allowing people to keep the fruits of their labor, rather than confiscating their wealth and giving it to people the government believes should have it.


Grudem rightly contends the Bible's emphasis is on individual freedom and a limited role for government. In my estimation, wealth redistribution by the state is a violation of the eighth commandment of God, "Thou shalt not steal."


2. Abortion. The Democrat Party is dominated by people who favor the protection of abortion rights for women. Protecting people's so-called sexual freedom has become a higher value than the sacredness of human life, more specifically, the fundamental right of the unborn to life. Behind this commitment is the belief that there are no moral absolutes for human conduct, particularly sexual conduct, which has also contributed to their commitment to gay rights and same-sex marriage. Republicans, by contrast, are dominated by those who believe quite the opposite.


There is absolutely no support in orthodox Christianity for the wanton destruction of the unborn in our culture. Moreover, the commandments of the Lord are not negotiable, and the Bible always speaks of sex outside of marriage between a man and woman or same-sex relationships in a very negative way.


3. Individual human responsibility for good and evil. Democrat policies tend to minimize individual responsibility and blame evil acts on factors outside of the individual, such as family, society, guns, or big corporations. Minimizing individual accountability, they think that people who do bad things can be persuaded to do right by conversation and more negotiation. Republicans, however, generally speaking, recognize evil is something innate, which requires strong military and police forces, and stronger enforcement of criminal laws to effectively defend against evil and promote good.

4. Beliefs about the human race and the natural world. Materialistic evolution is inclined to explain life with the assumption that development of the earth's resources will cause damage to the environment, and, therefore, people in the Democrat Party typically support stricter environmentalist policies. But those who believe the Bible as their directive for life; tend to believe God created the earth and its resources to be used sensibly for man's benefit. Such people have largely gravitated toward Republican policies that advocate "wise use" of environmental resources in the interest of God's crowning creation – mankind.

5. Beliefs about whether we can know right from wrong. If a person doesn't hold to an absolute standard of morality, then it follows one person's views are as good as the next. If it follows you can't really know what's right or wrong with any certainty, the people who are most dangerous to society are those who hold strong religious convictions – these folks have to be kept at bay and shouldn't be allowed to influence public policy. The people that should have the power in society are those which agree with them about their own subjective beliefs concerning what's good. The Democrat Party certainly attracts people of this persuasion, while Republicans, by contrast, attract more people who believe in absolute standards of morality as found in the Bible, traditional Jewish teaching, the Bible plus Roman Catholic tradition, or the book of Mormon. Moreover, Republican policies tend to reflect these moral absolutes – beliefs that rely on a higher authority and transcend themselves.

6. Religious Beliefs. As a whole, there is a significant difference between the religious beliefs of Republicans and Democrats. The Democrat Party leans more to the favor of those who either have no religious belief or are moral relativists. Those that view the Bible as God's Word in its entirety and authoritative in all matters of life, typically align themselves with the Republican Party.


Grudem concludes that the differences in our political system, which is largely a two Party one, Democrats and Republicans, have great significance for the Christian. "These differences are not accidental," he says, "but stem from differing convictions about several moral and theological issues." 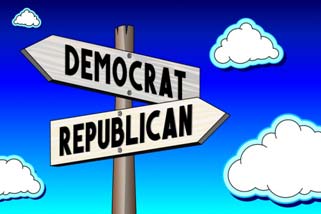 Although some of these issues overlap each other, Gruden is absolutely right.

Of course, an article of this nature is bound to result in some folks wrongly concluding Rev. Creech and the Christian Action League are just another arm of the Republican Party. Hardly! Those who know me are familiar with the way I can be appropriately critical of Republicans when I think they have departed from eternal verities.

Neither do I mean to suggest that Republicans are always better morally than Democrats.

And I don't exclude the fact some good Christians choose to register as an Independent or with a third Party that they believe is closest to their biblical convictions.

What I am saying, however, is that Christians who are members of the Democrat Party and earnest about bringing their politics into line with a strong Christian worldview, may want to seriously consider changing their political affiliation.