Rev. Mark H. Creech
Impeachment: It's really not about Trump 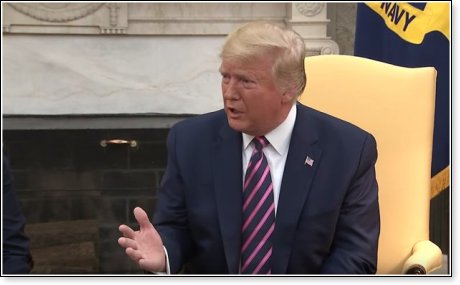 Wednesday, December 18th, the U.S. House of Representatives voted to impeach the 45th President of the United States, Donald J. Trump. After hours of intense debate, two votes, one charging the president with abuse of power and the other obstruction of Congress, were exclusively along partisan lines.

Trump's impeachment is truly a sad chapter in American politics. Not because of any corruption alleged against the president; Trump is really not the issue. Historical objectivity will show that other presidents have done worse than what this president has been accused of doing but there were never any efforts to impeach. Trump's impeachment is simply evidence of the great divide that has existed between Americans for quite some time.

Contrary to the assertions of many, it is not Trump that has divided the nation. Like a terribly festered boil, his election only brought the divisions which already existed to a head. Americans have always disagreed and vigorously debated over many things, but not since the Civil War have we been so separated over core values. Today Americans are divided about matters of fundamental moral and political import – matters where little-to-no middle ground for compromise exists.

We are divided over the size and role of government. Some look to government as the giver of rights, while others see rights as God-given and the government's role as securing and protecting them. Public-policy differences are enormous, with big government advocates attempting to make everything equal, while advocates of smaller government want greater individual freedoms and fear getting lost in the mass will.

We are divided over the way we discern good and evil. One side sees evil as a matter of the human predicament and the reason we need to hold people responsible for their actions, while the other side tends to blame the evil things that people do on forces outside the individual. Consequently, one side wants vigorous law enforcement, more stringent courts, and a better military, while the other side believes we need to focus on eliminating poverty, getting rid of guns, and validating all truth assertions through tolerance.

We are divided over our origins, and, therefore, how we define truth and morality. One side believes humanity is simply the result of random evolutionary processes. We are a higher form of animal life living in a material universe. The other side believes we were specially created in the image of a benevolent, all-powerful God. These two very different worldviews are stark and profoundly affect the way we see right and wrong, with one side denying there is any absolute truth or moral standard higher than themselves or social convention, and the other side believing every person and every nation is first accountable to their Creator, his law, and his purposes for the world.

One side sees the Constitution of the United States as a malleable document, and the courts bestow upon the nation its meaning by their various rulings, while the other side believes the Constitution must be interpreted solely on the basis of the founders' original intent.

The list could go on. We are divided over basic rights, such as the definition of a family, the protection of life, free speech, religious liberty, self-defense (ownership of guns), and immigration.

Again, Trump is not the issue. Not really. Although a person with clay feet, he represents the more traditional view of Americans – a view the Progressives hate, marginalize, and have taken a no prisoners approach to its followers. To impeach or better still remove Trump from office is in their estimation to chop-off the head – to symbolically strike a blow rendering a return to conservative public policies down for the count.

This is what makes the impeachment of the president so significant, so sad, especially for conservative evangelicals. And this is why when Christianity Today writes an editorial calling for the president's removal, it's indicative of the way even some evangelicals are wrongly divided. They strain at a gnat but swallow a camel. They fail to see the larger picture and would saw off the limb on which they sit. Not that Trump is anyone's Savior, but he does have more in common with evangelicals than they have with Progressives. Furthermore, when in power, the Progressives will eat them for lunch.

During World War I on Christmas Eve, it is said that battle-weary men in one trench started singing Christmas carols, and men in the opposite channel responded in kind. Cannons ceased their booming and the Spirit of Christ became all-pervasive. For the time, foes became friends. Nevertheless, afterward, they picked up their weapons and resumed making war.

Congress will do something of the same, we can presume – call a truce during the holidays but afterward resume the war. But make no mistake about it, the fight isn't about Trump; it's about the ongoing conflict, the great divide on core beliefs and values that has existed between Americans for decades.