Rev. Mark H. Creech
Revelation Chapter 4: Will there be gradations, rank, a higher existence for some in heaven? 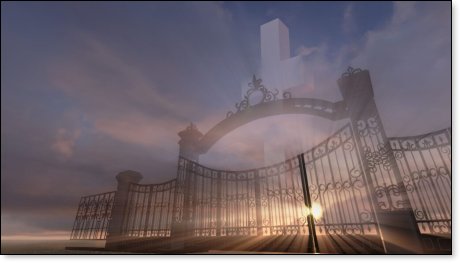 A Jewish legend says that during the great famine in Canaan, Joseph, while second to Pharoah in Egypt, ordered his officers to throw wheat and chaff upon the waters of the Nile so that the people below, downstream, might see that there was plenty above, upstream. Someone has said God puts upon the river of life a little of the wheat from the heavenly fields so that we, having a taste of it, might desire more and seek things from above.

Such is what one experiences reading Revelation chapter 4, where John stands in awe before the throne of God in heaven, an eye-witness to God’s incomparable glory and sights never beheld.

The Scripture says that in addition to seeing the Lord on his throne shining like jasper and carnelian with an emerald rainbow encircling him, there were also seated and surrounding him, 24 elders on thrones. The Bible says:

“Twenty-four thrones surrounded him, and twenty-four elders sat on them. They were all clothed in white and had gold crowns on their heads…the twenty-four elders fall down and worship the one sitting on the throne (the one who lives forever and ever). And they lay their crowns before the throne and say, ‘You are worthy, O Lord our God, to receive glory and honor and power. For you created all things, and they exist because you created what you pleased’” (Rev. 4:4, 10, 11).

Who are these favored ones seated so close to the throne of God?

Some think that they are angels. Angels, however, are never said to be crowned in Scripture. Revelation 5:8-12 says these elders sing the song of redemption. Angels know nothing of redemption, and neither does the Bible give definitive statements about angels singing. Moreover, angels are never precisely numbered in Scripture but only described as myriads by myriads in the tens of thousands. The book of Hebrews refers to an innumerable company of angels. The 24 elders are not angels.

Apparently, these 24 elders represent all of the redeemed of humanity in heaven. As the late Dr. W. A. Criswell, the former pastor of the First Baptist Church in Dallas, Texas has said, “That number twenty-four is a descriptive symbol of the all-inclusiveness (without loss of one) of all of God’s people.

In The Revelation Record, Dr. Henry Morris provides more information about the elder’s identity. He writes:

“But why twenty-four elders? The Israelites used seventy elders (Exodus 24:1) and no indication is given as to the number of elders in the early church. There were twenty-four orders of priests in Israel (I Chronicles 24: 7-19), but these were not the elders, and even though believers are to be kings and priests (Revelation 1:6), there seems no reason why the office of the priests should be comingled with that of the elder in heaven. The number twenty-four has often been held to be symbolic of the twelve patriarchs plus the twelve apostles. The latter, however, are specifically assigned to the job of judging the twelve tribes of Israel on twelve thrones in the millennial kingdom (Revelation 19:28), whereas the twenty-four elders are at the throne in heaven. If twelve of these are the twelve apostles assigned to judge the twelve tribes, then the identity and function of the other twelve are left up in the air. It is barely possible that they are the twelve sons of Jacob.

“There is one other interesting possibility as to their identity. The term ‘elder’ has both an administrative and a chronological connotation (note I Peter 1:1, 5). That the elders in Revelation are individual men and not just symbolic of all believers is indicated by the individual conversation reported of individual elders (Revelation 5:5; 7:13). They do represent all believers of all ages, but they are also individual men, the elders of all redeemed humanity…Finally, since the Lord did not choose to specify their identity, his method of selecting them is on the basis of merit, and thus he cannot reveal their identity until after the assignment of rewards at the Judgment Seat of Christ.”

This is a fabulous explanation of the 24 elders’ identity, which raises another very important question about heaven: Will there be gradations, higher ranks, or perhaps an advanced quality of existence given to some in heaven and not necessarily to others?

This may come as a surprise to many people, but…there are degrees of reward that are given out in heaven. I’m surprised that this answer surprises so many people. I think there’s a reason Christians are shocked when I say there are various levels of heaven as well as gradations of the severity of punishment in hell.

We owe so much of this confusion to the Protestant emphasis on the doctrine of justification by faith alone. We hammer away at that doctrine, teaching emphatically that a person does not get to heaven through his good works. Our good works give us no merit whatsoever, and the only way we can possibly enter heaven is by faith in Christ, whose merits are imputed to us. We emphasize this doctrine to the extent that people conclude good works are insignificant and have no bearing at all upon the Christian’s future life.

The way historic Protestantism has spelled it out is that the only way to heaven is through the work of Christ, but we are promised rewards in heaven according to our works. Saint Augustine said that it’s only by the grace of God that we ever do anything, even approximating a good work, and none of our works are good enough to demand that God reward them. The fact that God has decided to grant rewards on the basis of obedience or disobedience is what Augustine called God’s crowning his own works within us. If a person has been faithful in many things through many years, then he will be acknowledged by his Master, who will say to him, ‘Well done, thou good and faithful servant.’ The one who squeaks in at the last moment has precious little good works for which he can expect a reward.

I think the gap between tier one and tier ten in heaven is infinitesimal compared to the gap in getting there or not getting there at all. Somebody put it this way: Everybody’s cup in heaven is full, but not everybody in heaven has the same size cup. Again, it may be surprising to people, but I’d say there are at least twenty-five occasions where the New Testament clearly teaches that we will be granted rewards according to our works. Jesus frequently holds out the reward motif as the carrot in front of the horse – "great will be your reward in heaven’ if you do this or that. We are called to work, to store up treasures for ourselves in heaven, even as the wicked, as Paul tells us in Romans, ‘treasure up wrath against the day of wrath.” 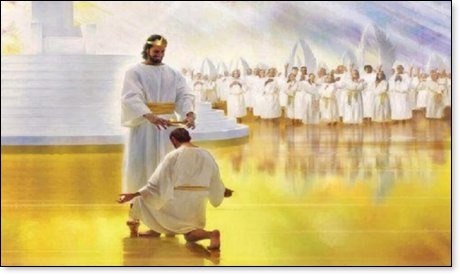 Bible scholars generally agree that what John saw in heaven was Post-Rapture, and the Judgment Seat of Christ, where our Lord had already judged his people for their heavenly rewards. Still, the 24 elders remain unspecified at present.

The 24 elders represent all of the redeemed, but they also show us that Christ will dole out crowns, rewards, and status to the faithful in his eternal kingdom. These rewards will not create envy as they often do here because the Righteous Judge will have judged everyone, and all will be satisfied and rejoice in God’s perfect judgment.

It seems more than foolish to invest all of our lives here in this life and neglect to earnestly embrace Christ’s admonition:

For we must all stand before Christ to be judged. We will each receive whatever we deserve for the good or evil we have done in this earthly body (I Corinthians 5:10).

Indeed, the Lord puts upon the river of life some of the wheat from the heavenly fields so that we, having a taste of it, might desire more and seek things from above.