Curtis Dahlgren
What IS the matter with Washington? [free cheese is for rat traps]

August 16, 2009
"There must be something wrong with the universal education [that] has made men the victims of charlatans in every field of human activity." — Dr. Arthur Voobus, 1955 (quoting R.M. Hutchins, Ford Foundation exec)

"SOME OF [PRES.] OBAMA'S HEALTH CARE NUMBERS DON'T SEEM TO ADD UP. And that's complicating his efforts to pass his top domestic priority." So said Tom Raum in an Associated Press article on the third of August [emphasis mine].

"The idea was to create an impression that a mass movement was afoot — that everywhere Congress looked, . . . everywhere, people were talking about reform."
- Wayne LaPierre, NRA, on McCain-Feingold

The flim-flam isn't flying this time. The ram-rod isn't ramming it through this time (HELLthCare "Reform"). You might want to review what I wrote as an RA analyst four years ago:
www.RenewAmerica.com/columns/dahlgren/051014

"Too many of our churches sheepishly stand by and 'watch,' while true defenders of Freedom are derided and blackballed — in a form of 'McCarthyism' in reverse. As Congressman Ron Paul says, we the people (including too many Christians) have been 'too tolerant, too nice, and too patient' for our own good."

Well, this time the Lilliputians may have awakened the sleeping giant a little too soon. As we begin to untie the bindings, however, WE are the ones being called "Nazis, terrorists, and the mobsters."

In Alice's "Wonderland world" of euphemisms, catch phrases, and sound bites, the "masters" thought that they had mastered P.R. and semantics in order to pull the wool over the eyes of the sheep. It may not work this time, but the following is taken from an article in America's 1st Freedom, June 2005, by Wayne LaPierre: 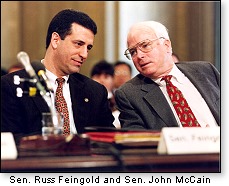 Sean Treglia, a former high-ranking operative of the Pew Charitable Trusts, a foundation worth more than $4 billion, last year openly admitted that passage of the McCain-Feingold campaign finance law — which bans political speech in the 60 days leading up to an election — was engineered, planned, funded, and executed by several lavishly wealthy, anti-gun foundations.

In other words, it was not a grassroots movement of people throughout the country. It was a scam. A fraud. A con job. Or, to be more exact, a midnight assassination hit on America's First Amendment.

In an explosive videotape obtained by the New York Post, Treglia is shown bragging to a conference of professors and so-called "journalists" at the University of Southern California about how he and his co-conspirators completely hoodwinked the U.S. Congress and the American people into buying the 'Bipartisan Campaign Reform Act' atrocity . . . a jihad by proxy against free speech.


THE REAL TARGET OF HELLthcare "reform" isn't "inequities, but the 10th Amendment to the Constitution — the better to get us to stifle ourselves, and stop asking "dumb questions" about States' Rights, and so on. Here are some of the Top Ten questions real people are really asking:

- "I don't know how they're going to pay for it, even over the first ten years. Getting off the launch pad is difficult, then controlling the orbit hasn't been figured out yet." — Robert Bixby, Concord Coalition director (quoted by Tom Raum, Associated Press).

- "But even the nonpartisan Congressional Budget Office says that none of the health plans pending on Capitol Hill would control long-term spending, and that ones with the elements Obama wants would add around $1 trillion to the deficit over the next ten years." — [ibid; A.P.; August 3, 2009]

- "You passed a prescription drug plan and didn't pay for it, handed the bill to me." — Pres. Obama

- "That's the history of all these kinds of programs," says Harvard economist Martin Feldstein, who was chairman of the Council of Economic Advisers from 1982 to 1984. He cited both Medicare and Medicaid as examples.

I don't think Feldstein is a member of an astro-turf rent-a-mob, and if Obama is already complaining about the "bill" for the prescription drug plan, I wonder what his successor will be saying if Congress passes Socialized Medicine over the heads of the American people?

The question, "the Nazis are whom?" is a clever distraction. What I want to know is, who are these people who keep pumping out 1,000 page "laws" that no one in Congress virtually reads! Do they have real faces and real names? Only "Bo knows," I guess.

YOU DO KNOW, DON'T YOU, THAT IT WILL BE A COMPUTER, NOT A HUMAN BEING, MAKING THE DECISION AS TO WHAT TREATMENT WILL BE "APPROPRIATE" FOR YOU (if ObamaCare is signed).

In a country of 300 million people, many of them elderly, the "Medical Advisory Council and Board of Review on Ethics" (MACABRE), will simply decide first how much money they want to spend, and then feed criteria into a super computer that will actually make the "final" decision on a case-by-case basis. This raises even more "dumb questions":

- Knowing that their patient's life may be in jeopardy, will a doctor's office answer all questions on the questionnaire truthfully?

- If a doctor has an elderly friend who really thinks he can pull through a serious condition, could the doctor try to feed information to the computer in Washington so as to give his friend a better chance of survival?

- Could the DC computer end someone's life because a doctor was having a hectic day, or a typist made a typographical error?

- Even worse, will the super computer in DC already know SO MUCH about the patient, that the doctor will essentially have no input into the decision, even if the patient is his best friend?

- Why are we trying to put more power into the hands of the Executive branch of the Federal government — and unelected "czars" — when (who knows) the next President might be worse than the one we have now?

"GRANDMAW GOT RUN OVER BY A CZAR, DEAR."

In conclusion, I honestly don't know if the current President is more naive than cunning, or more devious than naive. Don't want to go there; don't need to go there. And don't ask me "What's the point?"

I don't know if "Bo knows," but most of the rest of us know that European-style medical care and ethics led to involuntary euthanasia in contemporary Netherlands, never mind the Holocaust for the time being. "Involuntary euthanasia" means they can kill you if they WANT to.