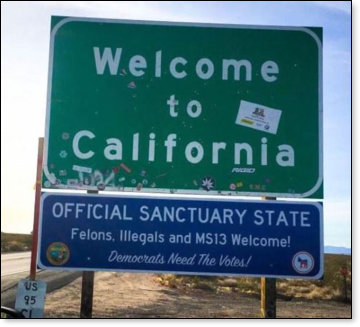 I use to live in California, it is a beautiful state with many wonderful Patriots! Besides giving America and the world classic Hollywood movies and Governor Ronald Reagan as one of our great Presidents, California gave use classic rock tunes like Hotel California, California Girls and California Dreaming.

Sadly that "California dream" is dying as despotic Democrats have turned California into a state enslaved by Democrat politicians and bureaucrats who have created a State- government gone wild with some the the highest taxes in America, excessive regulations, ridiculous costs to run businesses, and frivolous lawsuits that cripples free enterprise and private life.

Many of those illegal aliens have criminal records.

Recently Oakland's Democrat Mayor Libby Schaaf warned many of those illegal aliens that "ICE" Federal Immigration and Customs Enforcement officials were on their way to enforce Federal Law. Unfortunately many of those illegal criminal aliens escaped and have returned to haunt and harm Californians. http://www.foxnews.com/politics/2018/03/20/illegal-immigrants-who-dodged-california-ice-raid-after-dem-mayors-tip-off-re-arrested-for- new-crimes.html

President Trump vows to continue the fight against such Democrat-defiance of the Rule of Law. There are also a growing number of brave Californians fighting this Democrat debacle such as the Republican Mayor of Los Alamitos, Troy Edgar and the city council who have declared the Democrat "Sanctuary City Law" a violation of the US Constitution. http://www.latimes.com/local/lanow/la-me-sanctuary-state-flght-20180319-story.html

Shasta County has passed measures to cooperate with ICE to protect their citizens from illegal criminal aliens. Orange county and several cities such as Aliso Viejo, Buena Park, Huntington Beach and many others are in the process of debating this issue hoping to support President Trumps desire to stop the illegal protection of illegal alien criminals. https://www.ocregister.com/2018/03/20/anti-sanctuary-push-could-spread-far-beyond-los- alamitos-2/

Godspeed to my fellow Californian Patriots and President Trump as you fight for Life and Liberty in the great state of California!