May 3, 2012
A significant number of America's voters still believe in government of, by, and for the people. They still believe in the moral premises the American people first articulated in order to justify and explain their decision to separate and withdraw themselves from the dominion of the British monarch. Standing, as it were, before God and all humanity, they made plain "the causes which impel them to the separation." By the time they did so, their disagreement with Great Britain was already erupting into violent conflict. So when their representatives in the Second Continental Congress came together in May, 1776, they knew that the British government would fight rather than accept separation. They knew that their Declaration of Independence was tantamount to a declaration of war.

In America's politics today, the "Tea Party" label calls to mind the events that preceded America's Declaration of Independence. However, the elitist faction's media hacks have purposefully distorted the memory of those events to impose the notion that Americans now are reacting against excessive government taxation, just as they did in Revolutionary times. But this is a self-serving elitist lie, meant to distract attention from the real cause of disaffection in both eras. 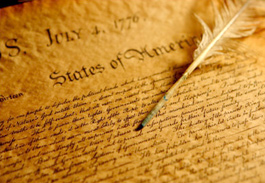 The Declaration of Independence begins with a statement of moral truths, truths that evoke "the laws of nature and of nature's God" and which depend, for their practical significance, on God's authority as the Creator. To prove that "the present King of Great Britain" had contemned those truths, disrespected God's authority, and violated His laws, the Declaration offers a catalog of facts. Those facts have mainly to do with acts of the King or his agents that disregard and seek to destroy the right of the people to govern themselves; and with the tyrannical abuses of government power that resulted from his actions. They highlight, in particular, various aspects of the King's assault on the people's "right of Representation...a right inestimable to them and formidable to tyrants only." Taxes are mentioned, but only in the context of this assault ("...imposing taxes on us without our Consent...").

This observation of the facts accords with the well-known slogan from the revolutionary era, "No Taxation without Representation." But in this slogan, as in the Declaration, the grievance lies not in the taxes per se, but in the abrogation of fundamental political right involved in levying them. So too in our day, the first stirrings of what came to be called the Tea Party movement came from restless disaffection in the GOP's constituency. This produced the Party's losses in the 2006 Congressional elections. This disaffection arose because the Party's actions failed to match its platform rhetoric in almost every respect.
Like the facts submitted to the world in the Declaration of Independence, this brief catalog of GOP defaults serves to illustrate a general condition, one that leaves much of the GOP's constituency to languish, like the inhabitants of early America, under a government in which they are without representation. Instead of the pomp and circumstance of Kingly pretense, the elitist faction hides behind a façade of elections, based upon an appearance of opposing parties entirely falsified by the GOP's consistent, purposeful refusal to represent the people whose electoral power it gathers and exploits. It is critically important to understand that this is not a failure due to incapacity or incompetence. Rather it represents the success of an elitist strategy intended to usurp the sovereignty of the American people, while preserving, for its pacifying effect, the appearance of elections by the people.

Like the actions of the British King, the elitist strategy purposely sets aside the goal of representation. The various elements of the elitist faction have abandoned the moral understanding from which arises the liberty of the American people. So they no longer regard the consent of the people as imperative for legitimate government. Their open (Democrat) or covert (Republican) embrace of socialism means that they care for no imperative but that of history, lensed carefully through the filter of "scientific" materialism. The only imperative of government is power, in whatever material form the situation requires.

Elitist electoral politics is not about representing the people. It's about manipulating them to serve as the source (raw material) and substance (usable instrument) of elite power. Though decked out in the intellectual trappings of supposedly "liberal" rhetoric or putatively "progressive" programs and policies, the final aim of elitist politics is to regress, to take Americans back to the age-old form of government characterized by the subjugation of the many to the few; the rule of privileged, self-aggrandizing elites over people they regard as weak, cowardly, common, and fit only to obey. This has been (and remains) the prevalent form of human government. However, until recently, Americans had successfully managed to take exception to it. (In the last several years I have time and again examined the regressive aims of the elitist faction. Readers who wish to review what I have written should click on the heading Without Representation, just added to this blog's navigation bar.) It's no coincidence that the elitist politics of our day is all about selecting leaders; following leaders; adulating and even worshiping leaders (to whom some ascribe what they call "rock star status" to signify the human idols they wish them to become.) Does this serve the aim of representation, or signify its denigration and abandonment?