Alan Keyes
God: just too embarrassing to keep around

May 14, 2012
Most individuals have experiences that pose a fundamental question about who they are. They go through life professing to believe in God or love or something; or else professing to believe in nothing much at all. Then they confront a situation in which they cannot escape a choice; where, by action or inaction they will declare to all the world, or to themselves and God alone, the truth or falsity of what, inwardly or outwardly, they have professed to be.

Particularly in such matters of character, I agree with Theodore Roosevelt that some observations are "... true of the Nation, as of the individual. ..." From the outset, the United States has professed to be a nation that holds certain "truths to be self-evident," as our Declaration of Independence says. Of course, if there is no truth, there can be no self-evident truths. Among the self-evident truths is the notion that we are "created equal." Of course, if there was no creation, we are not created, equal or otherwise. 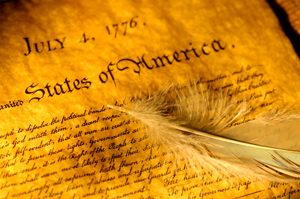 Thanks to the same profession of self-evident truth, we are a nation that relies on the concept of human rights. These rights do not depend on human will, judgment, power or legislation because they are a natural endowment, gifted to us in our very nature by the Creator who proclaimed the "... laws of nature and of nature's God." But of course, if there is no God, then ...

I know from firsthand experience that, years ago, guides at historic sites maintained by our National Park Service stopped quoting such God acknowledging phrases from the Declaration of Independence. I've noticed, too, that when July 4 rolls around, the elitist faction's blaring media touts it as "Independence Day." They neglect to mention that July 4 is not the date Congress voted to approve the resolution that declared the nation's independence (that's July 2). It's the date on which they approved the words of the Declaration of Independence and authorized its publication. It seems that our God-rejecting elites would rather we didn't dwell too much on the words of the Declaration. But if there is no Declaration of Independence, what becomes of our claim to God-endowed unalienable rights — and a government dedicated to securing those rights, that derives its just powers from the consent of the governed?

It's always worth noting that through all the centuries when God or the gods were held up by powerful elites to validate their claims of power, it didn't occur to them to drive all talk of divine authority away from the precincts of government. But since the logic of Christ's influence opened human minds to God's empowering love, even for the weakest and poorest of those who truly acknowledge Him — and since he offered the way for everyone to lay claim to true self-government — the "superior people" have decided to tap the undercurrent of God-rejecting atheism. They were more than willing to suppress it as long as superstition and error made divine authority a bulwark of their domination. As it became instead a burning light of truth, revealing the arrogance and abuse inherent in that domination, well, I guess God just became too embarrassing to keep around.

How they wish that Christ had never been born! How they wish that human faith, hope and courage had never been born again because of him! So now they wholeheartedly seek the self-fulfillment of that wish. For years they have done so subtly, translating the teachings of compassion and liberty into isms that glorify human material comfort and advancement at the expense of conscience — and that, in liberty's name, falsely worship unbridled hedonism, greed, power and mad ambition.

In the name of liberty, they have banished the concept of sin. Yet, in the guise of universal tolerance, they pretend to preach Christ's doctrine of forgiveness. Yet where there is no sin, forgiveness has no cause or meaning. In liberty's name they have idolized self-fulfilling love. Yet they kill the very heart of love in grisly rites of child murder, which they falsely address as healing or reprieve from the "punishment" of procreation.

Those were their subtle ways. But at present, by usurping the prerogatives of right, they are not so subtly arming themselves with the force of law. They mean to persecute all those who will not forget the profession of truth and God and right that is still the American creed. By law they will coerce every conscience to uphold their rituals of infant slaughter. By law they will coerce every student, every teacher, every school; every pastor, every minister, every institution and place of worship, to bend the knee to their idolatry of wrongs. In service to that "secular" religion, they openly assault the rights of procreation and commerce, association and propriety. Preaching the equal right of wrongdoing, they mean to destroy the peace and security of those whose only "crime" is to exercise their rights. They mean to birth a new polity of wrongs. And they will do so, whether by rewarding themselves for crime, or punishing for their decency the righteous souls who dare to bear witness against it.

Meanwhile, except it serves their own pursuit of power, lust or greed, who is willing to stand and prove their true adherence to the profession of God-endowed right that defines us as Americans? And in your answer, please don't speak the factious, partisan label of the GOP. Even now those so-called "Republicans" are poised to uplift Mitt Romney as the standard and standard bearer of their party's bid to represent the nation. Yet what he really represents is the deed-confessed abandonment of the Declaration creed. What do they mean by "Republican" who sometimes timidly mouth the words but then, in their deeds, abandon the logic, meaning and allegiance that upholds our constitutional republic?

Put no faith in their partisanship, or that of any others. Rather, put your faith in God, and trust yourselves to His divine Providence, as America's founders did. Then you may find the eyes to see; the minds to understand; the heart and soul and courage not just to remember but to live out the pledge of life, fortune and sacred honor that fulfilled itself in the nation's birth and may yet again fulfill our prayer that, with God's help, it can be born anew.

[This week at my blog, Loyal to Liberty, I am introducing a course of action that may be worth considering in this regard, in a series of articles entitled "Restoring Representation." Has your time come for action? If so, you may find it worthwhile.]