May 31, 2012
This entry is part 5 of 6 in the series Restoring Representation

A. Look not for a President who will do for you, but for representatives who will choose a President most likely to do his sworn duty to the country.

In the lip-service they give to the true meaning of the Republican label, GOP leaders routinely speak of their belief in "limited government." Yet in their practice of politics, they focus, just like the Democrats, on what government is doing, has done, or will do for some individuals and groups. In doing so, they give short shrift to the things that government is supposed to do for the people as a whole, according to the U.S. Constitution and the moral principles it is based upon. First among them: to secure the unalienable rights which are the common good of all. "To secure these rights, governments are instituted among men." So says the Declaration of Independence. If this is the first duty of government, then it is the first duty of all the sworn officers of government, for their office (from the Latin officium, meaning service, duty, etc.) is their duty. 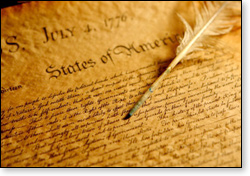 The elitist faction's sham political process literally turns this priority upside down. The "what have you done for me lately" mentality was once mainly associated with urban bossism's degradation of politics. The elitist demagogues have made it the byword of their campaign rhetoric. This is why their promise and spend, spend and borrow, and spend election strategies, which feed the addiction to government power, have bankrupted the nation. Down this bottoms-up political rabbit hole, the aim of the nominating process is to procure the best talking figurehead to speak for this political prostitution, with no more thought to duty or real qualifications than is required to find an attractive reader for the nightly news.

In the context of their power-corrupted way of doing politics, the oath and duties of office aren't even an afterthought. If a nominee is serviceable as the focal point for their manipulation of the electorate, their attitude says "let the Constitution's requirements go hang." Thus in Obama's case, the overwhelming majority of politicians and government officials in both parties pronounced, or acquiesced in, the view that the majority's vote is the only qualification for office, no matter what the Constitution says. In line with the worst kind of obsequious, mobocracy-promoting demagoguery, they then proceeded to apply this same attitude to abusive Presidential executive orders, as well as the subversion of the Constitution's plainly-mandated legislative process.

So a corrupting approach to politics leads to an abusive approach to governing, one that casts aside the limits and constraints of the Constitution's words in order to violate the limits and constraints of the Declaration's principles. Thus, on the excuse of national security, and with the support of majorities from both parties, Congress approved legislation erasing the due process of law for individuals, citizens, and non-citizens alike.

Such results are poison to liberty. But it does no good to protest these results while accepting, with bovine placidity, the corrupt political process that secretes their venom. It makes no sense to choose government officers with no regard for their commitment to the first duty of government, and then expect that, once in office, they will make respect for that duty their first priority. The priority that governed their quest for office governs their tenure in office. To change the process, we must reject the order of priorities it imposes. We must replace it with the order of priorities America's founders proposed when they subscribed to and adopted the documents that make up the nation's organic law.

B. Swear never, by action or omission, to disregard the words and principles of the nation's organic law — i.e., the Declaration of Independence and the Constitution of the United States.

Voters who want to replace the corrupt priorities of the present political process with the order of priorities America's founders proposed will have to pull themselves together to devise a path for the political quest that surveys candidates for proof of their commitment to duty before true representatives of the people agree to commit them to office. But in order to gather, they must first identify themselves — i.e., they must make their shared identity known to one another. 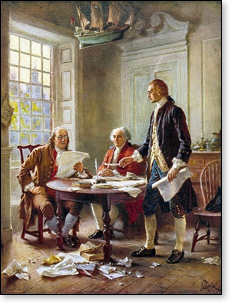 What better way to do this than to take upon themselves the commitment they want their representatives to carry out? By doing so, they would make it possible for their choices to substantiate the literal meaning of true representation. To this end, therefore, they should signify, in some way visible to all, their sworn assent to the following pledge (or something like it): "I do solemnly swear and affirm that I will never, by action or omission, disregard the words and principles of the Declaration of Independence and the Constitution of the United States, but will to the best of my abilities seek, by my vote and political participation, to respect and implement them."

Under the present corrupted political paradigm, demagogues favored by the elite faction are offered as the focal points for people's will and allegiance. In the paradigm intended to restore the integrity of the republic's foundations, the documents that express that integrity become the focal points for the allegiance of people of goodwill, that is, people whose will corresponds to the good aim and intentions of America's founders.

C. Coming together on the common ground identified by this oath of shared allegiance, develop by way of rational deduction a statement that sketches out the overall guidelines for the work of your representatives.

In the present corrupted political paradigm, the sham Parties develop what they call their political platforms. Whatever purpose they served before the present corruption of political understanding took hold, now they are mainly exercises in cynical salesmanship, cobbled together to support the pretense that the respective Parties offer whatever their pollsters and consultants tell them people want to hear. Their platforms are especially targeted at whatever core constituency the Parties rely upon to be the leaven whose activity causes their Party hacks to rise to the political occasion. Because they mainly serve this "public relations" function, these days the platforms exist for reference only, on an "if asked" basis. In fact, especially in the GOP, it is commonplace for "presumptuous" nominees to distance themselves from the Party's platform even before it comes into existence. This is done to make sure that the mandate they receive in the general election can be interpreted as an excuse to forget the platform altogether. This oblivion leaves incumbent officeholders free to act without much concern for representing the voters who elected them.

But because our new electoral paradigm aims to restore true representation, the goal of representation must condition all the operational elements of the political process it entails. Therefore, representatives won't stand on a separable political platform. Instead, they will be chosen in light of guidelines intended to assure that they share and will conscientiously strive to embody the moral principles, character, and good will of the people they have been chosen to represent.

Obviously, it's not possible for any single individual to say what those guidelines should contain. Their content cannot be developed except in the specific context of the commonality they are supposed to express. At this point, it is not inappropriate, however, to consider some examples of the deductive thinking that ought to be involved in composing them.

The guidelines aim to aid in the search for people who will conscientiously keep the pledge to respect the words and principles of the nation's organic law. A potential official's attitude toward issues that directly involve this respect, and his record in dealing with those issues, is therefore the first priority for consideration. It is the sine qua non of fitness to represent voters who are themselves bound by the pledge.

Such questions include:
In addition to having such guidelines as a standard for the activities of their representatives, voters held together by the bond of respect for America's organic law will literally have to rally 'round the standard and the bond, in order to give political effect to both. Is it merely a coincidence that we live at a time when both the method and the means needed to do so appear at hand and ready for use? If there are people with the vision and courage to employ them in the electoral context, the time seems ripe for a campaign of mobilization that combines a firm commitment to restore the wisdom of the founders with the unprecedented opportunity for grassroots' coordination and action made possible by 21st century technology.

[Next — Step Three: Focus on mobilizing voters who respect the standard and the bond]