June 13, 2013
Every day, we see another headline focused on this or that figure associated with the GOP wing of the elitist faction who is supposedly demanding the truth on the multiplying "scandals" of Obama's occupation of the White House. Steve Forbes demands a special prosecutor on the IRS abuses. Rand Paul is looking at suing Obama over the NSA's totalitarian project to monitor communications of untold millions without judicial warrant or even a suspicion of wrongdoing. Rick Santorum contends that "America demands truth on Benghazi." Apparently, none of them has much use for the U.S. Constitution. 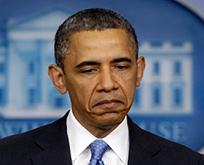 In this regard, the roaring silence of House Speaker John Boehner and the other Obama collaborators in the GOP leadership of the House ought to drown out these peripheral demands. Boehner and his colleagues control the agenda of the GOP House majority. Obama and other civil officers acting on his behalf are now openly engaged in systematic abuses aimed at overthrowing the U.S. Constitution, the privileges and immunities of U.S. citizens, and the fundamental God-endowed unalienable rights of every human being subject to the jurisdiction of the U.S. government. Across the board, it is undoubtedly the boldest, most extensive assault on the U.S. Constitution in the history of the United States.

On the whole, their abuses constitute a systematic, lawless breach of the fundamental covenant from which the just authority of government is derived. America's founders counted on the House of Representatives to become the focal point for the people's systematic, constitutionally-lawful resistance against such a breach. In the form of the power of impeachment, the Constitution charges the U.S. House of Representatives with the duty of gathering intelligence on this assault and rousing the nation to action against it.

The fact is, the GOP House leadership has been shamelessly derelict in their constitutional duty to begin impeachment proceedings against Obama and the others who are speciously acting as if offices that derive their whole authority from the Constitution can lawfully be abused to perpetrate an assault against it. The House Republicans have shirked their constitutional duty even though the assault targets the very provisions intended to safeguard the people's capacity to inform themselves, recognize the threat, and defend their sovereign will – as expressed in the Constitution – against it. This dereliction of the GOP leadership is the ominously unspoken truth that now haunts America's prospects for survival as a constitutional government, of, by, and for the people.

The enormous power of the U.S. government is in the hands of people whose intentions can no longer escape the imputation of high crimes and misdemeanors tantamount to treason. Unless checked, these people can and will blithely continue to employ that power in order to secure the success of their criminal enterprise. Already, thinking Americans are forced to consider the possibility that the military, security, and foreign policy apparatus of the U.S. government is being abused to further that enterprise in collusion with America's most powerful potential enemies.

It was no coincidence when the revelations of IRS abuses distracted from the burgeoning scandal focused on the assassination of America's envoy to Libya. So was it just a coincidence that the revelation of the NSA project to dissolve the constitutional shield, intended to safeguard the people's ability to communicate and organize amongst themselves, coincided with Obama's consultation with the head of the Chinese Communist state? Was it just a coincidence that the self-identified whistleblower responsible for revealing this liberty-chilling project sought refuge in Hong Kong, a place subject to the jurisdiction of Communist China, a country that might be strongly interested in the success of the Obama faction's highly criminal agenda, if such there is?

In its impact on both our international and our domestic security and welfare, Obama's abusive occupation of the White House casts a grim shadow over the prospects for the survival of America's constitutional liberty. In what has been dubbed the system of checks and balances established by the U.S. Constitution, impeachment is the ultimate check, intended to impede or stop dangerous abuses before they have gathered such force, in terms of inimical foreign and domestic powers, that they can be resisted by no means short of civil war. By failing to carry out their responsibility to deploy this constitutionally strategic resource, the GOP is allowing an ever-deepening cloud of distrust, suspicion, anger, and fear to spread throughout the body politic. To be sure, every new revelation of abuse rouses the people's concern and anger. But the other edge of the sword is the chilling effect it may have on people more inclined to fear than to resist what they perceive as a growing and unchallenged reality of power.

Right now, the morale of the American people hangs in the balance. There is no doubt that principled, clear-headed leadership, articulately advocating the use of the constitutional means provided to deal with just such a time as this, will galvanize the will of all Americans dedicated to the proposition that, whatever our differences, we have the right, indeed the duty and obligation, to deal with them as a free people, not as the terrorized subjects of people who, by freeing themselves from the Constitution's constraints, are positioning themselves to erect and maintain a perpetual tyranny over us.

Every American who hates the thought of such tyranny should unite now in demanding that the GOP leaders do their duty. The cry should be "IMPEACHMENT NOW! Do your duty and leave the rest to God and the American people." If the GOP leaders are too cowardly to act on their own, in light of the threat to the nation's good, then we should give them reason to understand that their failure to act is the last chance for the GOP to come to the aid of their country. But because we must now suspect that some or all of them care more for their own transient power than for the perpetuation of their country's heritage of freedom, we must also make clear, to them and to ourselves, that their action or inaction is not the last chance for America. Because there's a God in heaven, and life in the hearts of Americans who trust in Him, there is a lasting chance for us to restore the liberty that is the special interest of all those reborn in the only liberty that will never perish, wherewith Christ has made us free.