August 19, 2013
Sen. Rand Paul just "sidestepped questions about fellow Sen. Ted Cruz's (R-Texas) eligibility to run for president, saying he was not a 'birther.'" Paul's contempt for the requirements of the Constitution comes as no surprise to me, despite the fact that his supporters frequently pretend he is a staunch "constitutionist." But a staunch constitutionist would be careful to remember Joseph Story's admonition that acceptable constitutional construction "can never abrogate the text; it can never fritter away its obvious sense; it can never narrow down its limitations; it can never enlarge its natural boundaries."

Like almost everyone else who collaborates with the current two-party sham, Sen. Paul has chosen to abrogate the Constitution's natural-born citizen requirement when it comes to Barack Obama's eligibility. Now he thinks to prove his fair-mindedness by showing the same disregard for that constitutional requirement when it comes to Republicans. Apparently, he thinks that both parties should have the prerogative to disregard the words of the Constitution when it serves their partisan aims.

But respecting the authority of the U.S. Constitution's provisions serves the common good of the American people. It has been the key to the orderly conduct of their affairs since the nation was founded. Is it fair to the nation to permit abrogations of that authority so long as political parties are given equal license to engage in them? Is it worthy of someone who claims, as a matter of principle, to respect the Constitution? 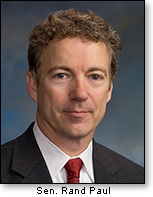 Ignoring the Constitution's "balance of power"

Back in March of this year, during Sen. Paul's much-publicized filibuster, I wrote an article questioning the seriousness of his claim to respect the U.S. Constitution. Though his mini-filibuster occurred in the context of Obama's nomination of John Brennan as head of the CIA, Paul made it clear that he wasn't opposing Brennan's nomination as such. He explained, "I disagree with the president on a lot of political issues, but I voted for his nominations because I think the president does get some prerogative in deciding who his political appointees are." He mounted the filibuster against Brennan not because of the nominee but as a matter of "principle," because Obama refused to declare "that noncombatants in America won't be killed with drone strikes."

Of course, the notion that the president simply has the prerogative to decide appointments that are subject to Senate approval is absurd on the face of it. The Constitution's language clearly assigns the "prerogative" jointly to the president and a majority in the U.S. Senate. Without that majority, the "prerogative" cannot be lawfully exercised. In this respect, the appointment power is, in principle, no different than the treaty-making power. Constitutionally, it makes no sense to say that the president has the prerogative to decide what treaties the U.S. accepts, absent careful, responsible scrutiny and decision, on the merits, by the members of the Senate.

The same is true of his appointments, especially when it comes to positions that involve responsibility for the nation's defense and national security. America's founders clearly recognized the folly of putting prior verbal constraints on the means to be used in response to the unlimited array of potential emergencies that may threaten the nation's survival. Hamilton rightly pointed out that, in such matters, "Confidence must be placed somewhere." As I pointed out in March, "this increases the need to make as sure as possible that it is not given to those who do not deserve it."

By abrogating the words of the Constitution, and the responsibilities its provisions entail (regarding the appointments process, or the issue of eligibility for the office of president), Rand Paul loyally represents the agenda of the elitist faction. That agenda aims to make the U.S. Constitution an empty procedural show, staged to manipulate the people, not to implement their God-endowed right to govern themselves.

Of course, Sen. Paul is not alone in such dereliction of duty to the Constitution. Recently, Sen. Marco Rubio slyly deployed the threat of lawless tyranny as part of his effort to stampede people into accepting his gang's proposal to license a massive foreign invasion of the United States (amnesty and a path to citizenship for illegal immigrants). This aims to dilute the independent sovereignty of the American people by creating millions of new voters beholden to the lawless largess of the elitist faction. 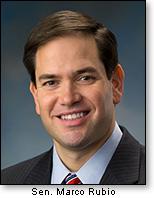 Mr. Rubio apparently believes that the proper response to Obama's tyranny is to implement the president's agenda, rather than oppose and end his abuses in the constitutional way. If Rubio or Paul (or any other GOP leader) had true regard for the constitutional republic established by America's founders, they would make it clear that the Obama administration's lawless, anti-constitutional actions on every front demand impeachment and removal of the offenders. They would decry the Obama officials' high crimes and misdemeanors. They would appeal to the people to vote for a majority in the U.S. House and Senate sufficient to impeach the abusers and remove them from office.

Instead of using the threat of Obama's unconstitutional abuse of power to intimidate voters, as Rubio is attempting to do, he and Paul would mobilize voters to deploy the remedy for such wrongdoing the Constitution provides. They would rally them to vote exclusively for candidates who pledge that, as soon as possible after the new Congress convenes in January 2015, they will propose and vote for the impeachment and removal of all civil officers of the United States government cooperating in the high crimes and misdemeanors of the Obama administration; and that they will support no one for any leadership position in the U.S. House or Senate who has not pledged to do the same.

But these days, the GOP's main concern is to represent the anti-constitutional agenda of the elitist faction, not the common good of the America people realized by effectively implementing the U.S. Constitution. I know that many Americans are grieved and outraged by the elitists' ongoing effort to eviscerate it. Are you? If so, read the article that invites your active participation in the remedy, and let your yes be yes to the perpetuation of liberty.