November 11, 2013
There's a national election in 2014. The people, according to their respective states and congressional districts, will vote to fill every seat in the U.S. House of Representatives and a third of the seats in the U.S. Senate. Theoretically, the outcome of the election could decisively alter the character of the U.S. Congress, the branch of government the Constitution entrusts with the power to alter the make-up of the other branches.

By now, a large plurality of Americans have awakened to the fact that a powerful elitist faction has, de facto, overthrown the Constitution of the United States. Behind a legal facade of constitutional procedure, they are systematically ripping out the infrastructure for self-government of, by, and for the people.

Similarly hiding their subversive intention behind a rhetorical facade of ideological language, false pragmatism, and compassionate pretense, they are systematically replacing the infrastructure of public self-government. At first little by little, and now with ever-increasing boldness, they are acclimating people to despotic methods and practices.

In effect, this restores the age-old model of government of, by, and for privileged elites. In this mode, government functions primarily as the instrument of factional, ruthlessly competitive personal ambition, discarding the primacy of the public good. In the factional model of government, elitist factions replace the people. Individuals subsist only as factional elements. On account of this dissolution of the people, there are, in effect, no public things (res publica, things that belong to the people) – only factional claims. The ascendancy of factionalism thus fosters the abandonment of republican government, reactivating the characteristic "l'état c'est moi!" arrogance of factional power. 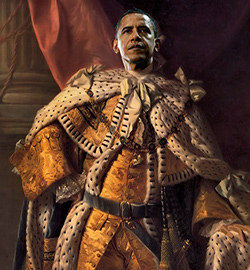 This resurrects the once nearly-universal disposition of government power as a species of private property, its ownership and abuse determined by the relative distribution of forces that result, at any given moment, from ceaseless overt or incipient factional war. This disposition of government goes by many names, including "liberalism," "socialism," "communism," "fascism," and Nazism (National Socialism). In modern times up to the present day, it masquerades as the triumph of equitable public justice over unjust and iniquitous abuses of private property.

But this invariably dissolves the people into abstract masses, with no identity (and therefore no property) but what is physically, emotionally, and spiritually imposed by the external manipulation of fearsome constraints for purposes determined by the self-serving will of the dominant faction. In practice, the people become an abstract nothing. The public exists in name only, the actual substance of their everyday existence being determined by the will of a few, who call themselves by names that signify their separate and superior existence (the ruling class, the party leadership, the power elite, the government, the "citizens of the world").

In the context of America's current political crisis, I call them the elitist faction. At the moment, they have successfully induced the American people to abdicate their role as the sovereign arbiter of politics and government power. Though the elites war against the Constitution, their strategy for doing so is based on a shrewdly accurate understanding of its terms. They understand that, even though America's founders feared the potentially harmful consequences of the legislature's supremacy, the founders consciously chose to make the U.S. Congress the ultimate arbiter of the U.S. government's power. Whoever controls a sufficient majority in the Congress may not only make the law, they may constitutionally recast the human composition of the entire government.

Given Barack Obama's repeated and continual disregard for constitutional constraints, it's understandable that current apprehensions of tyranny focus on his actions. But people who profess their ardent loyalty to the Constitution his actions overthrow ought to respect the judgment of its framers. Under the Constitution they devised, executive tyranny can make headway only when and if the legislative power acquiesces or cooperates in its abuses. This is most tellingly clear in the fact that action by the legislature is the only way to call the president to account for them.

In emails and comments I've read on news stories or opinion pieces about impeachment, I've sadly noted how few people understand the simple fact that there is no constitutional provision for the trial of a sitting president of the United States except impeachment and trial by the U.S. House and Senate respectively. There is no executive office under the jurisdiction of the U.S. Constitution (which includes the state governments) with the constitutional authority to arrest a sitting president, and no element of the judiciary with the power to try and convict him for any offenses. Until and unless the president is constitutionally removed, he personally embodies the executive power of the U.S. government. The use of force against the president is, on the face of it, an attack on the Constitution and government of the United States.

I've noticed that some people openly wish the U.S. military would move against Obama. Any such action would be, prima facie, a military insurrection, a fatal act of treasonous war in the course of which any involved military personnel would be subject to peremptory execution. No one loyal to the Constitution finds hope for America in the prospect of such an event.

The congressional impeachment/removal process is the only constitutional way to end unconstitutional abuses of the U.S. government's power at the highest levels. It can only occur if the people effectively demand it, by electing representatives willing to impeach and convict. In this respect, liberty is a Do-It-Yourself proposition. Only the people can rescue the constitutional sovereignty of the people from destruction.

The 2014 election offers Constitution-minded voters the chance (perhaps the last clear chance) to do so. Which is precisely why the elitist faction's media and political minions are anxious to rush voters into focusing prematurely on the 2016 presidential race. Under the U.S. Constitution, the Congress represents the ultimate sovereign authority of the people. Unless and until Americans reclaim the U.S. Congress from elitist control, government of, by and for the people will continue down the path toward its final demise.