July 9, 2018
I recently came across an article entitled "The Fourth of July once meant speeches, not fireworks." I thought it would be a thoughtful piece about the reasons why July 4th was once observed as a political memorial day – i.e., a day on which citizens in the United States remembered the basis for their rights, including the right of self-government. Instead, it turned out to be a denigration of the emphasis on speechifying that was once characteristic of the observance. It sneeringly portrays Fourth of July speeches as boring displays of bombast and verbal fireworks. It makes no mention of the fact that it is the one day of the year when politicians and their constituents are invited to consider why it is that ordinary Americans participate in the sovereign decision-making power of government mostly reserved, in the past, to a privileged few.

Past July 4th observances usually included readings from the document the day was chosen to commemorate. A speaker with some knowledge of our nation's history might remind listeners that July 4, 1776, is not the date the Continental Congress formally enacted the resolution by which the 13 original colonies broke their allegiance to the British Crown. They did so on July 2. July 4 was the day Congress approved the words used to notify the world of their action.

The day after Congress passed the resolution of independence, John Adams wrote his wife, Abigail, a letter. In it he assumed that July 2 would be America's birthday, celebrated by "solemn acts of devotion to God Almighty...solemnized with pomp and parade, with show, games, sports, guns, bells, bonfires, and illuminations." But that day of action was immediately overshadowed by the one on which the people responsible agreed on the text of what we would now call their media or press release.

Why did the document take on greater importance than the action? Because the action was not conclusive. It marked the formal beginning of a long, hard slog through fear, war, death, and mayhem, for individual patriots and for the new nation they were endeavoring to become. Despite Congress's resolve, that nation was still more than an idea than an established fact. As much or more than the power of America's armies, the power of that idea would provide the crucial force by which the new nation would stand or fall. The words of the Declaration of Independence expressed the spiritual force that powered the nation's common heart. Its power would be the key, unlocking its courage and good faith to persevere, from beginning to end of the long battle to decide its fate. 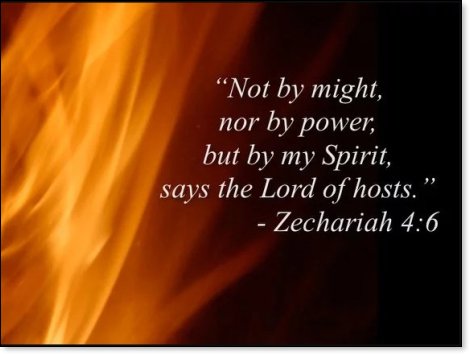 The words of the Declaration of Independence proclaimed the spirit of the American revolutionaries. The Declaration's words also identified the wellspring of that spirit, that is, the Spirit of the Creator, God –
We can better understand the spiritual power of the Declaration of Independence if we remember what the word spirit brings to mind in the thought of the French people who were the crucial midwives of the first birth of American liberty. In their language, the word "esprit" brings thought to mind, as well as the force of reason, that guides and directs the training of rational thought. Reason has no enforcing power but the apprehension of truth. But in proof of its presence, awe and wonder seize upon the mind. They act with a force that, in the moment of proof, holds firm against the pricks and goads of unreasoning passion.

The American Declaration of Independence depends on this force of reason, and on its source of power. That source is reason's cause, which John Adams rightly identified as "devotion to Almighty God." At its Latin root, the word "devotion" calls to mind a voluntary choice (vote), the vow which binds one to the object of devotion, and to whatever course of action maintains the bond between them. But if the object of devotion is the very cause of one's being, maintaining it is crucial to one's existence. Bondage, therefore, signifies a service we owe to ourselves, one by which we succeed in being what we are. It signifies the goodwill wherein one is determined, defined, and in key ways distinguished from everything else that is.

This bondage to the being that determines our existence, this inward tie that binds us to the course of action our existence requires, is the essential meaning of the word right as it is used in the Declaration. The phrase "unalienable rights" conveys its irony. For such rights are the actions we are obliged to undertake to sustain our way of being, our nature as human beings. Consenting thus to be obliged to our Creator, we free ourselves to be ourselves.

The irony of this consensual devotion seems lost on all the shallow right- and left-wing ideological drivelers of our day, the ones who carelessly treat "rights" and "freedoms" as if they are synonymous. They miss the point that is self-evident in the name of right: Not every freedom is a right, since freedom includes the choice of wrongdoing. By conflating freedom and right, one tacitly asserts that there is no reliable difference between right and wrong – no standard, measure, or defining boundary for justice (rightness) that allows us to distinguish one from the other.

The chief effect of this assertion is to reduce all issues of justice to an issue of superior power – for once we discard the reasonable distinctions dictated by our devotion to truth, what is left is whatever happens when the power that determines events reveals itself. The Marxists call it history, right-wing totalitarians call it the triumph of the will. Both speak of it in terms that see no measure with which to gauge it but the material appearance of a result that leaves one gorged to overflowing with the power once divided with or among all the rest. This overflow of power they call "progress": Progress toward the end of history, or else toward the fulfillment of whatever imagined destiny one (individual, race, or nation) longs to have, all to itself alone.

This obsession with monopolizing power is the distinguishing characteristic common to all elements of the elitist faction. They denigrate and despise the American Declaration of Independence because it represents the Christian understanding of the cosmos, in which one is willing to exist in an infinite variety of ways, so long as each agrees to observe the limitations that allow for its existence to extend itself without damaging the rest. In this, the mutually self-restrained and orderly existence of things, the virtue is the self-discipline all have in common. The truly superior power is the one that proves most perfectly adept at conquering itself. This power is exemplified in Christ, the Word of God responsible for Creation. He is the One who answers for Creation by surrendering His will, so that it may become the goodwill of all. He is the One in and through whom all others come to be precisely because, in the moment of their being, He ceases to insist upon His own. He is the One who agrees, as it were to die, so that all others may live; and hence returns to life so that all those who must die without His sacrifice may live again, if they are willing – renewing the life they otherwise must lose, forever.

And all He asks in return is that they vow to accept His gift of life on terms that extend the self-same benefit to all the lives that have been, are, and may yet be foreseen by His goodwill. Why do some now hate the Declaration that honors His authority? Why do others follow their lead? Why indeed, unless they think the good of all Creation should be sacrificed to serve the good they egotistically discard when they madly claim it exclusively, as their own making.