May 11, 2010
It's not even close. Amnesty legislation proposed by Illinois Congressman Luis Gutierrez and New York Senator Chuck Schumer is incredibly unpopular today among most Americans. In one startling poll after another (Gallup, USA Today, Rasmussen, US News, Zogby, etc.), U.S. citizens are making it abundantly clear (60% plus) that they don't want amnesty but the House, Senate and White House Democratic leaders are not listening. In fact, they are blatantly choosing to ignore the American public. 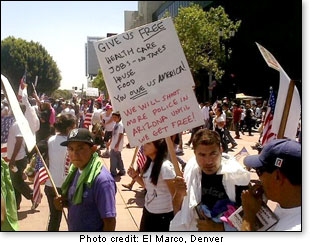 Remember, it wasn't too long ago when Speaker Pelosi referred to illegal immigrants (in a Catholic Church speaking engagement) as "heroes" and members of ICE (Immigration Control & Enforcement) as "un-American." This warped perception of reality is troubling, especially coming from the leader of the US House of Representatives.

Perhaps Democrats such as Pelosi, Reid, Biden or even White House advisor David Axelrod see passing amnesty legislation as a way of developing a whole new voting block for their party.

Currently, we (the American public) are experiencing a deep recession. The true unemployment figure is closer to 17% as compared to the reported 9.9% figure the Administration touts. A recent Wall Street story from 05-06-2010, uncovered the truth of government unemployment data and figures. Apparently, the federal government does not report people who have looked (for employment) for an extended period of time or even people who have 'given up' in their search for employment. Adding back these people in their equations make the official unemployment figures much worse.

Nevertheless, the President would still like to grant citizenship to 12-20 million illegal aliens who have completely disrespected our laws by entering the country illegally. These illegal immigrants have taken American jobs from American citizens. Their children, if illegal entrants also, get free (taxpayer funded) education (costing taxpayers annually $9-$10K per child). This doesn't include other miscellaneous state, federal housing and emergency care subsidies that many receive too.

Who are the big losers in this predicament? The American taxpayers are, including legal immigrants who end up footing the bill. Our society can no longer afford these expensive hand-outs.

Politicians on both sides of the aisle have used the old line that undocumented immigrants take "jobs that ordinary Americans don't want to do." I see absolutely no evidence of this being true. Just in the last few months, I've personally seen a number of men who have lost their jobs (i.e. engineers, calculation techs, teachers, scientists & carpenters) in this tough economy. These hard working Americans are more than willing to do anything to put food on the table for their families. Some of them have taken very low paying jobs at places like Wal-Mart, Target and Henry's market (to name a few) just to make ends meet. And still other acquaintances of mine are still out of work and don't know what to do.

It is an extremely tough economic environment. Granting amnesty to between 12 and 20 million people who do not abide by our laws or respect them is suicidal for our society. Perhaps this explains why Arizona recently passed SB 1070. The Arizona people have had enough!

The feds are not doing their job of protecting the AZ border. Just ask Bob Krentz, who was murdered by an illegal on his acreage near the AZ border. Time and time again the Feds have broken their word with the people of Arizona and America. That state and our country can no longer stand idly by and allow rampant crime (including record numbers of hostage/ abduction cases in Phoenix continue). The Arizona Republic recently condemned the Obama Administration for not cracking down on the 5.5 million immigrants who have overstayed their visit here. Senate Candidate John McCain, who is in a tight race with former Republican Congressman J.D. Hayworth, recently complained about his state being overwhelmed with the illegal immigration problem. He said before a Senate Committee meeting, "We've got drug smuggling. We've got murder. We've got abuse of human rights and human smugglers. We've got heavily armed organizations"... coming though our porous border.

Other border states are having it equally as bad. California hospitals as well as the state's social service programs are being taxed heavily by the influx of illegal immigrants. In Los Angeles County alone, the FBI reports almost ½

As inside the Beltway Democrats continue to ignore this serious problem, there are a number of states around the country considering similar action as Arizona did with SB 1070. Even our President seems to be unable to comprehend that SB 1070 is not racist legislation. It simply upholds immigration laws that are already on the books, and were already voted in by our Congress. SB 1070 does not discriminate, but simply requires basic forms of identification that all citizens must disclose. As Mexico's hypocritical president, Felipe Calderon, decries our immigration policies, try going into Mexico without papers and see how far you get before the 'Federales' throw you into the slammer.

It will be interesting watching the political landscape concerning this issue during the coming months. We must all stay engaged. The stakes are now running very high.