September 1, 2009
Shell-shocked liberals have taken to dubbing conservatives as "Ku Klux Klan folks" and "neo-fascists" toting swastikas to town hall meetings. But ironically, turns out it's liberals who have engaged in a century-long pas de deux with fascistic ideology.

Take Margaret Sanger — public health nurse, rabid feminist, and avowed socialist. Doing her rounds in New York City's immigrant ghettos, she became enamored of the biological and political possibilities of birth control. A prolific writer, she churned out numerous books and articles. In Women and the New Race, Sanger ominously expounded: "No Socialist republic can operate successfully and maintain its ideals unless the practice of birth control is encouraged to a marked and efficient degree." 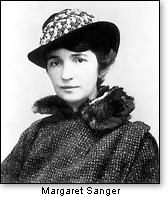 Margaret Sanger regarded members of both sexes with a decidedly misanthropic disdain. Of men she wrote, "In all of the animal species below the human, motherhood has a clearly discernible superiority over fatherhood....natural law makes the female the expression and the conveyor of racial efficiency."

Members of the female sex were equally worthy of contempt: "woman has, through her reproductive ability, founded and perpetuated the tyrannies of the Earth. Had she planned deliberately to achieve this tragic total of human waste and misery, she could hardly have done it more effectively."

In 1921, Sanger established the American Birth Control League, which later assumed the sanitized moniker Planned Parenthood. The League's co-founder was the anti-Semite Lothrop Stoddard, who would later aver the "Jew problem [is] already settled in principle and soon to be settled in fact by the physical elimination of the Jews themselves from the Third Reich."

Two years later, Sanger launched her notorious Birth Control Review. The journal would publish propaganda pieces like "Eugenic Sterilization: An Urgent Need" by Ernst Rudin, Hitler's director of sterilization and a founder of the Nazi Society for Racial Hygiene. The American counterpart to the Nazi group was the American Eugenics Society, of which Sanger was a prominent member.

In 1939, Sanger created the Negro Project with the avowed purpose of reining in the unchecked growth of the black population. But her true intentions went beyond mere population control: "We do not want word to go out that we want to exterminate the Negro population," she cautioned a friend.

At that time, blacks numbered 12 million persons, representing about one-tenth of the U.S. total.

The acme of Sanger's career came in 1932 when she unveiled her Plan for Peace. The fascistic manifesto urged the U.S. Congress to "apply a stern and rigid policy of sterilization and segregation to that grade of populations whose progeny is tainted," and to "give certain dysgenic groups in our population their choice of segregation or sterilization." Sanger's wide-ranging hit-list included "morons, mental defectives, epileptics, ... illiterates, paupers, unemployables, criminals, prostitutes, [and] dope-fiends."

Sanger admitted these persons constituted an "enormous part of our population," upwards of 20 million persons. That represented about 15% of the American population.

A mere year after Sanger expounded on her peace plan, Adolf Hitler signed the infamous Law for the Prevention of Hereditarily Diseased Offspring. During the ensuing years, the Nazi regime sterilized an estimated 400,000 persons deemed to be racially, physically, or mentally unfit. 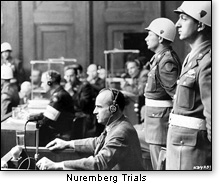 At the Nuremberg Trials, Allied prosecutors recited the horrifying litany of Nazi crimes, including the practice of compulsory sterilization. Without mentioning Sanger by name, the German Socialists defended their harsh population control measures by explaining it was the United States from whom they had taken inspiration.

Over the years, Margaret Sanger used her bully pulpit to call for the segregation or sterilization of 15% of the U.S. population, and the extermination of another tenth of the citizenry. Despite those fascistic designs, Margaret Sanger still occupies a revered position in the pantheon of American liberalism.

Every year, Planned Parenthood bequeaths its Margaret Sanger Award to recognize "outstanding contributions to the reproductive health and rights movement." Past recipients include such liberal luminaries as Bella Abzug, Phil Donahue, and Jane Fonda.

Any guesses who carried home the award in 2009? Secretary of State Hillary Rodham Clinton.

Mr. Roberts' work has been cited on the Rush Limbaugh show. Besides serving as a regular contributor to RenewAmerica.com, he has published in The Washington Times, LewRockwell.com, ifeminists.net, Men's News Daily, eco.freedom.org, The Federal Observer, Opinion Editorials, and The Right Report.

Previously, he served on active duty in the Army, was a professor of psychology, and was a citizen-lobbyist in the US Congress. In his spare time he admires Norman Rockwell paintings, collects antiques, and is an avid soccer fan. He now works as an independent researcher and consultant.

December 29, 2011
Warning to women: the government wants to turn you into a rape victim

August 27, 2011
Department of Ed rewrites the Constitution, at the expense of men

August 15, 2011
Violence Against Women Act must stop the hateful stereotypes

July 12, 2011
Violence Against Women Act: do the rights of men matter?

June 8, 2011
Presumed guilty until proven innocent...even then you're still guilty