January 11, 2011
The campaign to delegitimize the Jewish state is no doubt bringing a smile to the ghost of Hitler's Propaganda Minister, Josef Goebbels.

The drones who spew again and again the anti-Israel big lies are, perhaps, not aware that their words and falsehoods come straight from Goebbels's own handbook. 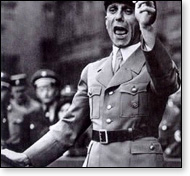 These western Israel bashers spend all their energies in supporting the unsupportable, namely the Hamas thugdom that has arisen in the Gaza Strip as well as the rival and corrupt Palestinian Authority. But they do it by perpetrating the sin of moral equivalence and by victimizing the victim.

They are like the cheering audience in George Orwell's futuristic novel, 1984, who unquestionably accepted the Ministry of Truth's double speak that Knowledge is Ignorance; Freedom Is Slavery.

Every outrage, atrocity, and violent act perpetrated by Hamas is overlooked or simply ignored. Every act of blatant aggression by Hamas against Israeli civilians is presented as an act of "resistance." But what is this Hamas resistance to? Is it to Israel's very existence? It seems so, and that tells us much about what the Israel haters themselves believe.

How happy the shade of Goebbels must be as the latter day aspirants of his dark evil ways continue the man's deadly work sixty six years after his death — and against the same victims: the Jews.

But I wonder how many of those who read the poisonous letters, articles and pamphlets created by the Israel bashers truly know what the reality is? Do they know, for instance, how many missiles have been fired from Gaza into Israel since the Jewish state gave Gaza to the Palestinian Arabs in 2005 — an historical and unprecedented concession?

Do they know that the mostly Muslim Arab inhabitants of the Gaza Strip (most Christians have been systematically driven out) have proven to the world that they are incapable of creating a viable and democratic state, and are unwilling ever to live in peace with Israel? No, they don't know, or if they do, they don't care. After all, these are inconvenient truths and the truth plays no part in their lexicon of hate. But for those who are not blinded by hatred towards embattled Israel, they should know that the number of missiles Hamas and Islamic jihad have launched from Gaza in a veritable bombardment upon Israeli civilians, is now close to twelve thousand. Yes, that is 12,000! And it goes on.

In the last three months of 2010 a total of 40 rockets or mortars were fired. This is considerably more than in the previous 3 months. According to the Israel Defense Force (IDF): "... within the first week of 2011, 11 rockets were fired from the Gaza Strip into Israel's southern villages and towns. On Saturday (Jan. 1), a Qassam rocket was fired at the Sha'ar Hanegev regional district, home to approximately 6,500 civilians in villages and hamlets.

But little, if any, news of these continuing Arab outrages appear in the mostly left leaning international and national mainstream media. However, when Israel is finally provoked beyond endurance by Muslim Arab aggression and retaliates, banner headlines are the order of the day in the very same media: Double standards and hypocrisy writ large.

Israel responds towards each act of Hamas aggression, not like Hamas by targeting civilians but by hitting the gangs launching the missiles, or by bombing the smuggling tunnels used by the Palestinian terrorists to bring in sophisticated and lethal weapons.

When one Israel basher was given information about the numbers and lethality of the missiles and mortars, he merely replied: "Oh, come on. They are only like pea shooters." In other words, if the anti-Israel handbook of lies and deceptions is challenged, the programmed Israel bashers resort to any reply however ludicrous.

These drones are not willing to accept the passion and suffering of Israeli men, women and children enduring a situation in which every day missiles strike and traumatized civilians never know where or when it will happen next.

As the admirable Colonel West, now Republican Rep. Allen West, said at a Ft. Lauderdale conference last December 12, 2010, "... how much more is needed for people to understand the desire by some to wipe Israel off the map when Iran's leader, Mahmoud Ahmedinijad, goes to Lebanon and stands with Hezbollah calling for Israel's destruction? When is enough, enough?

"When is it enough that in S'derot, the little Israeli town just two or three miles from the Gaza border, the Jewish children are shell shocked and the playgrounds have bomb shelters. Why? And when is the implacable hatred of Israel clear enough when Israeli soldiers armed with paint ball guns — yes Paint Ball guns — land on the Gaza flotilla's Turkish ship and are forced to defend themselves from axe wielding thugs, Turks and others, masquerading as "human rights activists" and "peace activists?"

Remember, the ship was attempting to symbolically create a precedent whereby other large ships could directly bring huge quantities of weapons to the Hamas terror occupiers of Gaza to be used against S'derot and all the other nearby villages and towns in Israel.

The Israel hater wants only one thing: No Israel. Exposing their lies and pointing out their brazen untruths does not faze them for facts are not a part of the program they are indoctrinated into absorbing. So only the Arabs who call themselves Palestinians — terrorists included — are to be sympathized with; be they right or wrong.