October 4, 2010
Six years ago I posted my only public prophetic dream and forgot about it. Since then, the U.S. deficit has skyrocketed to $13 trillion, a gas explosion ripped through San Bruno, PG&E is grimly investigating old gas pipelines lacing California while the "Pacific Ring of Fire" it sits on is looking pretty active on US Geological sites. http://earthquake.usgs.gov/ Meanwhile youtube displays videos of Islam claiming San Bruno was the will of Allah. 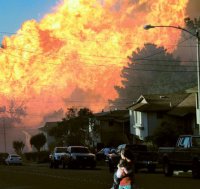 It's not Allah we should be concerned about. The Sept. 9th explosion is not the fulfillment of the following dream, just a precursor of what is coming and is:

"In Revelation, John speaks dramatically of great mountains burning, angels, the four winds of the earth and a sea of glass like unto crystal... Wow.

So what was my dream? What dramatic wonder did I see? What glorious majestic vision can I poetically describe of what I saw? (hanging head) ...A shopping mall.

I rarely shop. I haven't "hung out" at the mall since I was a teenager. There aren't any out here in the sticks where I live and it's the LAST place I would want to write about having a dream of. Give me clouds, give me fiery horses, let me write about Jesus, but please God, a shopping mall??? I'm already mocked so much!

But it was a shopping mall.

As soon as I realized where I was, what I think was an angel came to me and said, "Leave this place". ...I started to leave, sensing the seriousness of it, and suddenly I was standing on the outside watching the mall destroyed. Big heavy walls of concrete and brick, broken glass, it all became a twisting of rubble. It didn't take very long at all. I looked down at the grass and I knew fire was coming from the... (I don't care what it sounds like) sprinkler system. I saw people running around frantic, so I pulled up one of the sprinklers and tried to stop it by tying a knot in the thin white plastic pipe it was attached to, and suddenly he was there and he said, "There is someone else who is coming." I felt a compelling of not to go there, not to do that, it was like a warning, a caution, a strong "don't go there, stay" compelling.

I cannot describe what it felt like when he spoke. It was like every part of your being knew it was true, there was no confusing worldly knowledge, there was no doubt, there was a calmness and you knew with every fiber of your soul that what he spoke was the truth, it had weight, it was safe but his warning was dire. Then I woke up.

It seems to me this shopping mall represents America's commerce, completely destroyed. The fire in the sprinklers is the wrath that is coming.

"There is someone else who is coming." Don't go there, stay.

...I realized, (wince), maybe I shouldn't have tried to stop the fire coming from the sprinklers...? I mean, who am I to try to alter things... "

To read the dream in it's entirety, go to http://www.blessedcause.org/Encourage/sons,%20daughters%20shall%20prophesy.htm

Any web archive will verify the date.

Fast forward to today, and I've been trying to tie a knot at the onset of Islam and homegrown tyranny. Last week I struggled to submit a column about Islam in our textbooks. I'm not supposed to "go there" any more. I'm not supposed to try to stop what's coming. After so much research of violent Islam, I have to lay that down and write, "Don't blame the Muslims, we brought this on ourselves."

After murdering millions of the unborn, we have now begun to fund abortion worldwide. Words cannot express the horror of that much blood on our hands. We are infecting the world with idolatry, pornography, perversion, spiritual assaults on children, the stain of sin spreading the darkness leads back to US as our leaders pressure Israel to lay down and die.

I know what I sound like. I expect to be ignored at best or condemned and ridiculed by both right and left just like pastors were after 911. Nothing good will come of this for me, but it still has to be said. And somehow God has a way of making it heard, I have NO idea how so much of what I write makes it to the top of Google. "A message from God" brings you to my website in the first few slots without preferential settings. It doesn't matter if no one listens, I have to "stay" with the message:

America, don't blame the Muslims, we brought this on ourselves.

To the born-again Christian, though Islam rises up against you, love the Muslim as Christ loved the Roman soldier that drove the nails through His hands and feet. Forgive the Muslim and the atheist, they do not know the darkness that has possessed them nor the consequences as they try to infect our children. The God of Abraham, Isaac and Jacob will judge. Hold close to your families and keep watch. Look at the signs on the fig tree, our Redeemer is near.

A Message from God

All things in Christ (old posts at top of google)