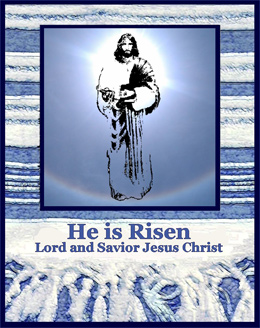 Christ entered the "heart of the earth" when HE BECAME SIN on the night He was betrayed. The Bible says man's heart is exceedingly wicked (Genesis 6:5, Isaiah 64:6), and Christ entered or was submerged in that wickedness for three days and three nights.

If Jesus is the Lamb of God, the Lamb had to be presented without blemish. Jesus was presented as the sacrifice on the night He was betrayed and BECAME SIN. Witness:

But He was wounded for our transgressions, He was bruised for our iniquities: the chastisement of our peace was upon Him; and with His stripes we are healed.

Christ had to become sin before the payment for our sins could begin or the blood would be wasted. The chastisement "was upon Him." The miracle of Christ's redemption began on Thursday night when Christ became sin, immersed in our sins and delivered unto man. Before the first drop of His precious blood, Jesus suffered far more than physical death, He became sin in the heart of the earth, in the belly of the whale.

Do you think it is a coincidence that ALL verses regarding Jesus that contain the words, "three days and three nights" testify of the SUFFERING of Christ in some way prior to His death on the cross? Below are three, in all there are twelve.

1. "Saying, the Son of man must suffer many things, and be rejected of the elders and chief priests and scribes, and be slain, and be raised the third day." (Luke 9:22)

2. "Jesus said unto them, the Son of man shall be betrayed into the hands of man; and they shall kill Him, and the third day He shall be raised again." (Matthew 17:22)

NO WHERE does it only say, "The Son of man must die and the third day rise again" without listing the full sequence, including suffering. There is only one exception, and that's because it is a direct quote of non-believing Pharisees who had no clue.

Jesus Himself used "earth" many times when He referred to the heart of man. The "four soils" parable (originally "earth" in Scripture, Greek and KJV) confirms that earth is used to describe the heart of man. The importance of this is exemplified, for when the disciples asked Jesus to explain the parable, He said,

The "faith of a mustard seed" parable is also planted in the earth and the earth signifies man's heart; and the talents were also "hidden in the earth" by the lazy servant. Suddenly so many other verses that include the earth make sense. The treasure hidden in a field, etc. are all about man's heart.

So let's look at what happened on the night He was betrayed and see if there is anything that signifies the delivery of the Lamb of God. It is written in Mark 14:50 that when the soldiers took Jesus:

"They [His followers] all forsook Him and fled. And there followed Him a certain young man, having a linen cloth cast about his naked body; and the young men laid hold on him: and he left the linen cloth, and fled from them naked."

Linen is the righteousness of saints. (Revelation 19:8)

The righteousness of saints, the linen, was left by this "certain young man," this spiritual being as men [soldiers] took hold of him, and he fled naked as Jesus was arrested. When Adam sinned and ate the fruit,

"he knew that he was naked and hid from God among the trees of the garden (Genesis 3:7-8)

When Adam sinned and when Jesus became sin, both times righteousness was removed, nakedness was revealed, somebody fled and hid.

Adam sinned and thus the fall. Jesus was the second Adam who became sin and bought us back by His blood. When this event happened, payment was being made, Jesus was delivered into the hands of men and was beaten, bruised and scourged. He bled the precious blood to redeem us. It was the lamb's blood that was painted on the doorposts in Egypt at Passover,

"He was wounded for our transgressions."

Jesus delivered Himself into the hands of men, without blemish. Jesus became sin and the "righteousness of the saints" (which we have only in Christ) was removed... the linen was left, the precious blood began to flow, payment had begun; and Jesus, separated from God because He became sin, was in the "heart of the earth," the belly of the whale.

Oh, how He loves us. While we were sinners, yet He loved us.

For I am persuaded that neither death nor life, nor angels nor principalities nor powers, nor things present nor things to come, nor height nor depth, nor any other created thing, shall be able to separate us from the love of God which is in Christ Jesus our Lord. (Romans 8:38-39) Praise God! HE IS RISEN!

A much expanded version and many more Scriptures can be found at BlessedCause.com