Jen Shroder
20 States seeking to Secede; What are the godly to do?


"We hold these truths to be self-evident, that all men are created equal, that they are endowed by their Creator with certain unalienable Rights, that among these are Life, Liberty and the pursuit of Happiness. — That to secure these rights, Governments are instituted among Men, deriving their just powers from the consent of the governed, — That whenever any Form of Government becomes destructive of these ends, it is the Right of the People to alter or to abolish it, and to institute new Government, laying its foundation on such principles and organizing its powers in such form, as to them shall seem most likely to effect their Safety and Happiness." 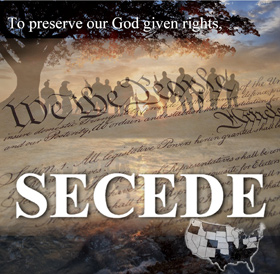 The process has begun in twenty states to gain 25,000 signatures peacefully requesting secession. President Obama must acknowledge and respond once they are gained. As of this date, Texas has achieved it and 19 other states are following.


"Believe me, dear Sir: there is not in the British empire a man who more cordially loves a union with Great Britain than I do. But, by the God that made me, I will cease to exist before I yield to a connection on such terms as the British Parliament propose; and in this, I think I speak the sentiments of America."


Obama's administration along with Congress has forced Obamacare upon us while voting a different plan for Congress. This is not representation, it is tyranny! We are not serfs, we are the people! When Congress cannot be trusted to do what is best for the people, when cronyism rules the day, when our representatives see themselves as royalty above us, it is time to secede, peacefully if possible.

We have been abused far too long. Our taxes are funding abortion mills, forcing atheism on our children through multiculturalism and evolution in public education, our right to bear arms has been chipped away and is continually threatened as are parental rights. Because of the United States Supreme Court , our children can be told to get on their hands and knees to repeat the Muslim prayer that Allah is the only god worthy of worship and Mohammed is his prophet because it is claimed to be done in "demonstration;" meanwhile the word "Christmas" is banished as are the Ten Commandments and all things Judeo-Christian.

This nation was founded on God, it is why we are exceptional, but the liberal left, such a darkened principality, has been gaining ground because both the Republican and Democrat parties are corrupt to the core. Romney lost for many reasons but a large part being that his record dripped with big government progressivism and the blood of the aborted. Romney claimed his view of abortion had changed, but the GOP that owned him has not. The platform of the GOP is false, the treatment of Ron Paul was appalling, campaign funding for truly prolife candidates was stagnant while lavishly funding liberal homosexual activist Richard Tisei in Massachusetts.

Since Obama's election, the GOP and their talking heads are looking for a scapegoat to blame but the real reason the Republican party has failed is because of the lies, manipulation and deceptions of its leadership. They cannot rebrand what is corrupt at its core.

For the Conservative Christians and Jews, I see two plans of action. First, we can join a different party. It matters not if it wins or loses, what matters is that you are standing on the right side when Christ comes. One MAJOR party is the Constitution Party, and if found sincere, I believe should be the one party to unite, for their seven principles are:
We can pursue to secede, but we need leadership. If godly men and women will stand up and lead us, then we should pursue this action wholeheartedly. I am praying that God would send those leaders because without them, secession would result in bloody chaos. Virgil Goode, Allen West, Brad Dacus, Chuck Baldwin, Alan Keyes, with God fearing men such as these and more, I believe we could do this if God is willing and with much prayer. But I am seriously concerned that the wheels have already begun to turn beginning the end times and the New World Order that the Bible foretold. I do not know if God will bless us in this or if it's too late, but I do know this: all of heaven notices where each one of us stands. We have hope in God alone, whether we gain victory or not, these are questions not nearly as important as where we stand in the process. God will bless or God will continue to judge this nation. Jesus told us our future that we not be troubled, so whether or not we succeed, do not fear, remain in His peace. But be sure you are laboring in the fields of the LORD when He comes, and that, I believe, is in the effort to stand for God and for country, which this nation has largely abandoned.

I want to especially invite all African-Americans in this endeavor, because you are a faith-based people to whom I see as heroes in California because of your stand on Prop 8, as well as various times in the Bible, i.e. the Ethiopian who risked his life to rescue Jeremiah out of the dungeon mire (Jeremiah 38); the Cyrene who helped Jesus carry His cross (Matt 27); You are a mighty people, many are my brothers and sisters in Christ, and we need you. Obama is said to be only 12% black, in the name of God, please look at Obama's fruit. The blood of abortion is on his hands, he is not the representative of a noble race unless you make him so!

Come out of her, my people. Find the petition to secede or join a different party, but do not continue to support the evil that our government has become except for the rare few within it that are fighting to turn us around. Pray for them, and do what you can. May God bless you in your efforts and cover your families with His protection in the times yet to come.

May God have mercy on us.