September 14, 2009
Washington, DC. Saturday September 12, 2009. America spoke today. Real America. Not black America, not white America, not Hispanic or Asian America, not even conservative or liberal America. Real America. There were mothers, sons, fathers, daughters, newborn children and kids on the way up; there were many, many elderly and a lot of disabled folks, young and old, in wheelchairs. Many of these people had never been to a protest before 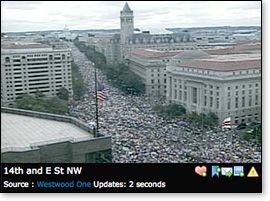 in their lives. People were pleasant, polite and considerate. There was not a drunken eye in the house. The most unlikely bunch of domestic terrorists one could ever imagine. Contrast that with the Leftists' "peace" movement in Seattle a few years back.

We are not liberals or conservatives. We are Americans. I am not a conservative, I distain that label. It was dreamt up by some leftist so people like me could be buttonholed and dismissed as, "oh, he's just a conservative." And as the media has fallen further into the Left's maw, conservative has morphed into "rightwing" which has morphed into "radical rightwing nut" and inevitably, "fascist!" Of course Hitler was in fact a leftist, and allied with Stalin until he realized he had been duped. But the left glosses over that inconvenient truth, as they do with the truth generally.

I am an American. I believe in American values; that is, the principles and guiding documents on which this country was founded. Is it conservative to understand, appreciate and defend the United States Constitution? All public officials make a solemn pledge to uphold it. Are they all conservatives? Is it conservative to believe in the First Amendment? So are all journalists conservatives? These days, many "journalists" are actively trying to suppress any news that doesn't fit their agenda. They are not trying to suppress "conservative" speech; they are not hypocritically trying to stifle "alternative" views. They are attempting to systematically shut out the truth.

And the Left, personified today by Barack Hussein Obama and his freak show fiefdom, is horribly, horribly wrong. 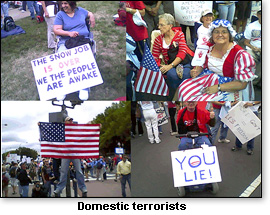 This rally resoundingly confirmed that America has woken up. Of course, before we even got there, we fully expected the mass media to play down the event. On the bus drive in, we agreed the media would put the attendance at "tens of thousands."

Sure enough, practically every news outlet in the United States has reported "tens of thousands." ABC, NBC, CBS and even Fox gave those figures; however the CBS headline only said "thousands." Dan Rather's ghost must still haunt the editorial rooms. Interestingly, The British Daily Mail newspaper reported "up to two million."

Early on, someone erroneously reported that ABC had said "two million." ABC later reported an estimate of 60,000-70,000. That quickly became the news of the hour, as the Leftist netroots sought to discredit the event by focusing on this mistake, even accusing Michelle Malkin of somehow posting a fake screenshot of the march. They later recanted, but continued to accuse her of inflating the attendance numbers, a charge easily disputed by just reading what she said.

Surprisingly, MSNBC's Tom Costello disputed NBC's own reported "tens of thousands" which they claim came from Park Police. (Since the "Million Man March," which the National Park Service estimated at much less than one million, they no longer provide formal estimates.) Costello said that "Our own people (NBC's) say in the hundreds of thousands." Surprisingly His report was perhaps the most honest, straightforward report of anything I saw from the networks. See it here.

I think NBC got it right. Here is a series of time lapse photos of the march from 8:00 am to 11:30am. The crowd was constantly anywhere from 25 to 50 abreast. I know. I walked in the middle of it, along the sidewalks to move forward quicker, and around the entire circuit, up to and beyond Senate Park. At times, we were so crammed together, breathing became strained. Taking the low number, and assuming a line of 25 crossing a given point every second for three-and-a-half hours, gives you about 300,000. Whatever the actual number, it was certainly magnitudes greater than "tens of thousands."

It was fun checking out all the signs. I took tons of pictures. The collage below is just a few of the many good ones I saw.

Chants on the march included "Shut down ACORN!" and "Boot Charlie Rangel!" and "Don't tread on me." There was not a single "Hey Hey/Ho Ho" in evidence. Songs included "Glory Hallelujah" and "My Country 'Tis of Thee." The most moving chant might have been when we walked past the Newseum, with its ginormous carving of the First Amendment on the side, and the crowd spontaneously said "Read that wall! Read that wall!"

I was in the crowd that began shouting "Read that wall!" as we passed the Newseum. It was indeed ironic to see the First Amendment covering the entire front of that ten story building, and to consider how vicious, unprincipled and dishonest the MSM have been in their attempts to shut us up. I joined in the chorus with enthusiasm. 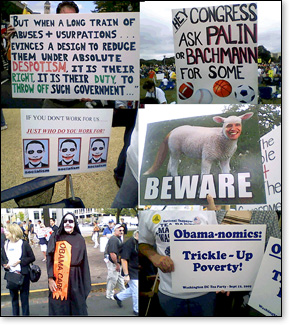 My two favorites though, were "You Lie!" and "Here we are!" the latter being Steve Elliot's retort to Barack Obama's insulting threat, "we will call you out," which prompted a riotous uproar.

I only saw a few astroturfers at the entire event: one lonely, frightened looking ACORN girl trying desperately not to be noticed, and a singing troupe. This was obviously a professional bunch. The men were dressed in tuxedos and women in formal black dresses. They sang a well-rehearsed song about loving the evil Blue Cross/Blue Shield just as it was, and held perfectly printed signs, like "Our Death Panel Turns a Profit" and "Let them Eat Advil." The satire of course, was meant to convey that this is what the "status quo" gets you: bad, expensive coverage. It was a prime example of the Left's typical non-sequitur argument: things are terrible now and you're terrible for resisting change. The argument illogically assumes things couldn't get any worse. Newsflash: things can always get worse, and under Socialism, they always do.

Here's a great short video of march highlights. See a good Glenn Beck video about the march too, with added comments by Chuck Norris. 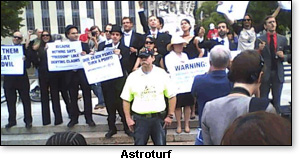 Meanwhile, Obama fled to Minnesota for the weekend, finding, not surprisingly, an adoring crowd to sit raptly at his feet while he expounded on the virtues of his health plan as counterpoint to the march. The White House laughingly denied having any prior knowledge of the march. As the Washington Examiner reported:

On Friday the White House claimed they had no idea the rally was even planned. A ridiculous assertion that shows how dismissive the Obama administration and the Democrat-led Congress are of those who oppose their agenda. It is impossible to believe that President Obama knew nothing of the event. The denial is a perfect example of why the President is losing the trust of many Americans. He stretches his credibility to its limits, and beyond.

All it all it was a great day for America. The sleeping giant has awoken again. We are on the march, literally. Now the work begins.