Stone Washington
The Demigod: Ahab, killed by Moby Dick or his obsession for revenge? 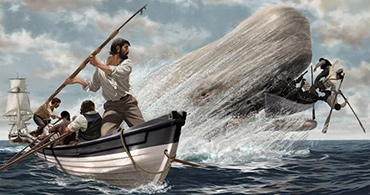 Ahab is a strange man who lost his leg to a monstrous whale on his last voyage. Confined to his cabin due to a strange sickness, the captain has been in a savage mood since his encounter with the whale. Ishmael points out that the biblical Ahab was an evil man, but Peleg says that, in his opinion, Ahab is a good man: "He's a grand, ungodly, godlike man" who is "kind of moody-desperate moody, and savage sometimes."

The narrator, Ishmael, begins this legendary classic epic of an obsessed man and his Leviathan foe, the great white whale Moby-Dick, with perhaps the most famous opening line in all of English literature – "Call me Ishmael."

The opening scene takes the reader to a cold Saturday night in December. With no one around, Ishmael goes to the Spouter-Inn in New Bedford Massachusetts, on his way to Nantucket, where he hopes to join a whaling ship and go to sea. He is disgusted when the inn keeper tells him he has to share a bed with Queequeg, but all too quickly they become friends. Queequeg is a cannibal that eats raw meat, worships a Negro idol and is not Christian. The next morning Ishmael and Queequeg attend a prophetic sermon in the Whalemen's chapel. The preacher reminds his listeners to reject sin and to fight evilness and falsehood with truth. He recounts the dramatic biblical story of Jonah's struggle with the whale and stresses that man's greatest achievement and success in life come in acknowledging God above all else: "If we obey God, we must disobey ourselves."

Soon the two leave for Nantucket in search for a whaling ship and Ishmael picks the Pequod ship for their journey. Though they manage to find a nice ship, the captain of the boat: Ahab, was a very weird man. "Ahab is a strange man who lost his leg to a monstrous whale on his last voyage; he has been in a savage mood since his encounter with the whale" explains Peleg, one of the owners of the Pequod. Ahab harbors a deep hatred for the large whale and intends to capture and destroy the beast along with all the evil that plagues the world. During the voyage, Captain Ahab emerges from his cabin. Ishmael trembles at the sight of the awesome captain who bears a jagged white scar on his face, and a white peg leg. Soon on their voyage, the crew encounters Moby-Dick, an enormous, blood thirsty beast. Despite encountering a devastating typhoon along the way, Ahab pushes on with his rapid chase for the leviathan albino whale as it swiftly whirls through the water, "as Ahab and his men are closing in on Moby Dick, the pace quickens," Melville writes.

Finally Ahab's eyes locks onto to the pale, rough whale, beginning the legendary three day chase. On the first day of this epic adventure, Moby-Dick is harpooned. But despite this seemingly fatal wound, Moby-Dick aggressively counterattacks, and smashes into the Pequod; escaping in the process. On the second day the whale's sides are gashed by the combined harpoon attack of the three whale boats. In retaliation, Moby-Dick smashes the boats of Stubbs and Flask, two of Ahab's crew members, and everyone is saved from the attack except for Feddallah, another crew member. After the smokes settles on the third and final showdown, Ahab shoots another harpoon into Moby-Dick. But despite the captains courageous efforts, the enraged whale reacts by crashing through the Pequod, killing all the crew members. Ignoring all cries of reason, forbearance and self-preservation, Ahab throws one last harpoon around Moby-Dick, but the rope of the harpoon catches Ahab around the neck and Moby-Dick plunges downward into the depths of the ocean, dragging Ahab down into a watery grave of his own hate-filled revenge. In the end everyone is found to be dead... everyone... except for Ishmael, who lived to tell this legendary tale.

Moby-Dick has important lessons for Americans in modern times. Captain Ahab, an atheistic, immoral, revenge-crazed madman is driven to the point of obsession as he constantly chases after the legendary Leviathan white whale seeking to slay the beast and (in his mind) rid the world of this singular evil and all other evilness, despite the paradox that he dedicates himself to the devil, the father of evil! Not surprisingly Captain Ahab's motives darkly reflect today's amoral political landscape in America of a party with a horrible past that it tries to escape from. A political party that made its name making slaves of others, held a traitorous loyalty to our English colonizers (e.g., "loyalists"), in the eighteenth century their political descendants would freely embrace and propagate such destructive philosophies as: Marxism, Communism and Socialism. I speak of the Democratic Party and their current "Ahab" President Barack Obama who, though he professes to be a Christian, repeatedly covers up religious symbols of Christ at speaking venues like Georgetown University, a Catholic school. He is so pro-abortion that he even pushed for policies to allow babies born alive as the result of a botched abortion, to not be resussitated by the doctor, but to die a cold, merciless death of starvation on the table.

Looking further back at the notable wicked men in history, I have discovered another definite match for Captain Ahab: Adolf Hitler. The most noteworthy similarity between the two odious men would be Hitler's demonic quest to exterminate all Jews and Ahab's misguided quest to slaughter Moby-Dick and satisfy his own misplaced ego. Sinisterly enough, both men sought to rid the world of evil starting with the most malevolent thing they saw in their eyes. For Hitler, it was the Jews and for Captain Ahab, the enormous whale, Moby-Dick. But both men didn't realize that the same evil they sought to remove from the world was the very evil that afflicts these men's souls – foolish pride, and selfish ambition – the demonic intent to reign supreme over the world they neither understand nor can control, which makes them unwitting (or witting) dupes to carry out the devil's will over the affairs of men.

In conclusion, evil demigods, dictators like Hitler and Ahab still exist today. In modern times, Obama and the Democratic Party lives only to deconstruct America's proud Constitutional heritage and to eradicate all that is good, worthy, Christian, and true. We the People, America, must not fall victim to Obama's destructive plans for progressive/regressive demonization of this country's great historical legacy: for us and for all humanity, but to learn the valuable lessons from Captain Ahab's lethal follies and not fall prey – to reject the paradigm of death represented by the eternal hatred of Hitler, the obsession of Ahab and the anti-constitution, anti-American policies of President Barak Obama.