July 1, 2009
On April 15, over a million people  who had already smelled the contaminated coffee of the Obama regime's galloping socialism-cum communism-cum totalitarianism  attended thousands of Tea Parties across the country.

Since then, the Tea Party movement has grown exponentially, with hundreds more taking place on a regular basis and attended by Republicans, Democrats, Independents, Libertarians, et al.  all increasingly horrified at Obama's breakneck efforts to destroy free-market capitalism, inflict decades of debt on future generations, spit on the U.S. Constitution and the Bill of Rights, employ a Hitler-like force of ACORN brown-shirts (read what Dr. Paul L. Williams has to say about them here) to manipulate the census and intimidate critics, compromise our military and intelligence services, and ultimately bring about a caliphate of repressive Muslim (Sharia) "law" to the United States of America. 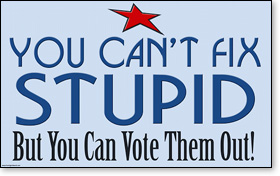 Sure enough, a day before the Tax Day demonstrations  which Obama's Press Secretary Robert Gibbs said the "president" knew nothing about  Homeland Security Secretary Janet Napolitano issued a fatwa that declared the extraordinarily peaceful Tea Party attendees de facto "domestic terrorists"  including our military! As radio host Dr. Laurie Roth has written: "That offensive and lying list ended up targeting two-thirds of the country, certainly those who love their freedom, Constitution, and God."

That was then. Today, we are zooming towards 10 percent unemployment (and higher in several parts of the country), a cap-and-trade tax  the biggest tax hike in American history  that will effectively kill commerce and inflict ongoing hardship on the 95 percent of people Obama in campaign mode promised not to tax, and a socialized medicine scheme that will ration healthcare, aggressively promote killing the young via abortions and deny timely diagnoses and treatments to older Americans, and afflict our nation with the same kind of system that has failed so grievously around the world.

"According to Osama Bin Laden," writes Arnold Ahlert, "one of the principal reasons for the perpetration of the 9/11 atrocities was to cripple the American economy. He and al Qaeda needn't have bothered. A feckless Congress and a clueless president are more than up to the job."

People are not only afraid  they are disgusted. Disgusted as the "president":

As readers of my articles have read before, this is the short list!

The majority of Americans  including the Obama constituency of Blacks, Hispanics, gays, feminists, and liberal pundits, et al.  are now having Buyer's Remorse! The only people not cringing at every news cycle and weeping with regret are the radicals in Congress and the union organizers who hope to ride the Obama gravy train into the Socialist "paradise" they've been yearning for  and planning  over the past several decades.

But for most people, when they consider what this alien hybrid of a Manchurian Candidate and Trojan Horse has done in five short months to bankrupt our country and everyone in it, it is clear that this "president" is the worst thing that has ever happened to the land of the free and the home of the brave.

Not quite ready for a full-fledged rebellion, Americans are gearing up once again to express their grievances on July 4th  the 233rd anniversary of the Declaration of Independence  in thousands of Tea Parties across our country. But even before they take place, it is heartening that citizens have been hard at work in heroic efforts to save America from the catastrophe known as Obama.

"In fact," writes political journalist JB Williams, "the Obama administration has made so many wrong moves so fast that it has frightened people across the nation into action. According to the Tenth Amendment Center:

Individual stalwarts, too, have their own unique strategies. Ron Ewart, president of The National Association of Rural Landowners, says that The Only Truly Effective Tea Party involves "taking your messages of freedom to where [politicians] live, eat, procreate and sleep...because the perpetrators will have to pay a personal price for their misdeeds before they get the message." And JB Williams recommends "taking your protest to the front steps of every local TV news station in America so that the media can no longer ignore the movement."

True to form, the Obama regime (yes, regime) has already tried to suffocate the free speech that the upcoming Tea Parties embody. After the April 15th Tea Party in Atlanta proved to be one of the best-attended in the country, with over 20,000 participants, its organizers secured the same location, the Gwinnett Place Mall, for July 4th, only to have its permit pulled about a week ago. Turns out, Melvin Simon ((a Forbes 400 billionaire and co-chairman of Simon Property Group, Inc.) owns the Gwinnett Place Mall, has been a major contributor to Obama (and other Leftists), and gave at least $1 million to the William J. Clinton Foundation. And his wife Bren was a major contributor to Obama's inaugural committee. The good news is that their efforts failed and just days ago, the Atlanta organizers secured a new location.

"We are a nation in grave danger of being deprived of everything so many Americans worked, fought, and sometimes died to maintain," writes Alan Caruba. "We are being betrayed by a political and economic socialist theory that is the antithesis of the American system of governance [which] killed millions in the last century. America in 2009 must be reclaimed in the name of all those who came before us and in the name of generations to come."

Herbert E. Meyer, who worked for the CIA during the Reagan administration, explains:

During the last 30 years we Americans have been so politically divided that some of us have called this left-right, liberal-conservative split a "culture war" or even a "second Civil War." These descriptions are no longer accurate. The precise, technical word for what is happening in the United States today is revolution.

While conservatives have been working to improve our democracy and our free-market economy, liberals have been working to replace our democracy with a dictatorship, and our free-market economy with a command economy controlled by the government. The liberals couldn't say this aloud, because if they did the American people would have tossed them out of office on their ears. So the liberals worked covertly, feigning support for democracy and for the free market while working diligently to undermine both.

Our country's future now lies within our own hands  yours, mine, all of us who comprise what the Washington insiders sneeringly call the grass roots. Good, because unless I'm very much mistaken the liberals have over-estimated their strength. There still are more of us than there are of them. I mean ordinary, decent Americans from across the political spectrum who may disagree about specific issues, but who understand who we are and how we became who we are; who love our country, have a genius for self-organizing, and won't let the United States go down without a fight.

Now let's all get out there on July 4th and reclaim our country!

1. Spread the Tea Party message to everyone you know

5. Arm yourself with information

6. Learn the differences between the "isms"

7. Recognize the mainstream media for what it is: the enemy

9. Make your voice known to your elected representatives

10. Know who represents you on the state and local level, too

12. Finally, if you're going to fight, Fight Fiercely!

http://www.tenthamendmentcenter.com/ (where Michael Boldin keeps up with the increasing number of state legislatures declaring sovereignty).

To Tame A Tyrant