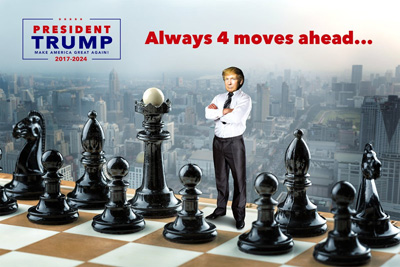 It's easy to deride the aberrant behavior of the leftists we've been unhappily witness to, both over the course of the presidential campaign and particularly since Donald J. Trump ascended to the presidency on November 8th, 2016. After all, they've never recovered from the Bush v Gore race of 2000!

But as a wise neighbor told me years ago about an exceptionally vile person we both knew: "She's more to be pitied than scorned."

At the time, this seemed overly charitable to me. But as the decades have elapsed and I've watched progressives consistently acting so infantile, it is clear that their limited repertoire – hurling of insults and obscenities, public temper tantrums, wanton destruction of property, idle threats to leave the country, physical assaults on people who disagree with them, engaging in serial lies of increasing magnitude and pepper spraying mothers and children marching in support of President Trump – dictates that they are indeed more to be pitied than scorned.

After all, all of their sound and fury has resulted in – drum roll here – nothing!

Make that worse than nothing, especially if you're dealing with the mortal enemy of the progressive agenda – FACTS!

In 2010, in the first midterm elections after Barack Obama took office, the Democrat Party experienced some of the hugest losses since the Great Depression, with Republicans gaining 63 seats and a majority in the House, six seats in the Senate which expanded its minority, 680 seats in state legislatives, and 29 of the 50 state governorships.

Still, in their head-in-the-sand fashion, Democrats ignored the losses and continued to believe that as long as they could, ahem, control the outcome of the big elections – with conservatives who had died but strangely reappeared after death as Democrats, and organizations like ACORN aiding and abetting their efforts – their power – actually abuse of power – would go on forever.

After Mr. Obama was reelected in 2012, Democrats held control of the Senate and Republicans maintained their hefty lead in the House, as well as the majority of governorships. None of this mattered to Mr. Obama, whose contempt for the duly-elected Congress was matched by his arrogance in consistently bypassing that august body to foist his own Marxist agenda on an increasingly suspicious electorate.

The results of the November 2014 midterms were, by any measure, a catastrophe for the left. Republicans gained a total of 247 seats in the House of Representatives and 54 seats in the Senate, achieving the largest Republican majority in the U.S. Congress since the 71st Congress in 1929. In addition, the GOP won 31 governors' races, Democrats 18. And Republican-controlled legislatures increased from 57 to 67, leaving Democrats in control of the smallest number of state legislatures since 1860.

While both midterms rejected the Progressive agenda, the clueless left still had enough blustery confidence in the Democrat Party to put up not one but two socialists for president in 2016: Hillary Clinton and Bernie Sanders.
When it came to bashing Wall St., endorsing state-run medicine and education (Obamacare and Common Core), celebrating abortion on-demand, embracing the anti-American and anti-Semitic United Nations, railing against guns (while being protected for decades by men with guns), endorsing every treaty that has been disastrous for America, and advocating for every scheme of the globalist agenda, Hillary was your girl! 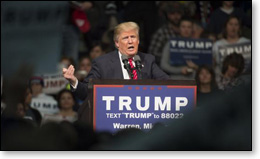 Beginning of the end

Unmistakable hints that the Progressive agenda might be coming to its ignominious end came over the course of the 18 months that Donald Trump ran for the presidency. During that time, candidate Trump, speaking to stadium-sized audiences, systematically attacked every one of Barack Obama's failed ideas, policies, and executive orders that had been inflicted on Americans during the previous eight years, calling them "disastrous," "failures," and most important, "bad for America." Among the items on his laundry list were:
But that is not all. With boldness, indeed fearlessness, never seen before in politics, candidate Trump took on the biased leftwing media and the fake news they've spewed for decades, as well as the fake pollsters who followed their fellow sheep in pronouncing for month after month after month that candidate Trump would lose the election in a landslide.

All of this rang resoundingly true to Americans who lived outside of the East and Left coasts of America, those blue-state bastions of Progressives who love the goodies that freeloading communists and socialists always love – free everything, from housing to schooling to education to medical care to illegal drivers' licenses to illegal voting rights. Oh, not to omit a demonstrably low regard for America and American exceptionalism.

I personally laugh out loud when I hear of the uber-wealthy people from both coasts – and their slavish echo chamber in the media – sending out tweets and emails from their privately-piloted planes bad-mouthing Wall Street and vilifying people who support secure borders, when none of these sanctimonious phonies would let a day go by without checking their spectacular bank accounts, having their armed body guards at-the-ready to protect them, and their valets and maids double-check that their home alarm systems were in perfect working order.

In the same way, I laugh when I see leftist relics like Joy Behar and Whoopi Goldberg from "The View" and their ilk in other leftist media cite Donald Trump from 12 years ago talking locker-room talk about women, when these self-appointed defenders of morality and women's rights have twisted themselves into labyrinthine knots to avoid mention of the quintessential abused woman of the 20th century, Hillary Clinton, and the degree to which her husband Bubba – their hero – spit in Hillary's face every day and night for eight years – as well as before and after his presidency – with his serial abuse, cheating, accusations of rape, and lying under oath about his sordid behavior.

Their hypocrisy should not only discredit them for all time, but also the so-called journalists like Mika (MSNBC) and Norah and Gail (CBS-TV) and Alisyn (CNN) and Rachel (MSNBC), and the other faux feminists who work for uber-rich male leftists, with their globalist agendas, running media empires for multimillion-dollar salaries – it's always about following the money – and literally dictating what their employees say.

Hey, ladies, you're angry at Pres. Trump, whose wife and daughter both run hugely successful businesses? Ivanka now has an office in the West Wing! Why are you angry at him instead of your cheap bosses? Why aren't you running a channel or cable network yourselves? Pathetic!

But this is relatively small potatoes in comparison to the barrage of anti-Trump commentary these fake journalists regurgitated both before and after the election, including the false, go-nowhere Russian narrative. They should be the first to admit, but never will, that all of their efforts have resulted in – another drumroll here – nothing! 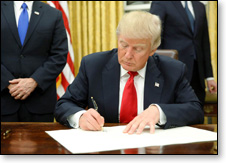 President Trump is still filling stadiums and still accomplishing more every week than Barack Obama did in eight years. An article edited by Jim Kouri, founder of a homeland-security consulting firm and Board Member of the National Association of Chiefs of Police, "First 50 Days a Major Victory for Americans," spells out a number of those accomplishments:
And that is not to omit:
There is so much more...but you get the picture. The left has thrown everything at candidate and now President Trump and nothing has stuck. Why? Because President Trump truly represents We the People. He cannot be bought or compromised or intimidated like most politicians, and he is still the smartest guy in the room! 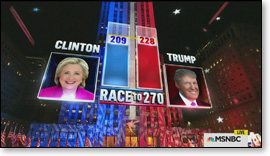 I remember watching the returns come in on November 8th, with virtually every commentator on every network and cable channel pronouncing the inevitable conclusion.

"There is simply no way that liberal states like Michigan and Wisconsin and Pennsylvania will ever vote for a Republican...never been done."

On and on blathered the "experts"!

But they were all wrong!

What we're seeing today is the result of what happens when a grown up steps in to save the mess that out-of-control Progressive children routinely make. Tooth fairies and unicorns and the glamorization of brutal regimes run by megalomaniacs like Hugo Chavez in Venezuela and the Castro brothers in Cuba and the mullahs in Iran – all of which leftists support! – are antithetical to freedom and prosperity and everything else that America stands for.

President Trump effectively destroyed his opponents' identities – everything they think, believe in, embrace, base their behavior on, agree with their friends and partners about, everything that animates their entire lives. What we've been witnessing is their pitiful reactions.

To them, I say – without a shred of sympathy for their offensive, classless, and seditious behavior – Boo Hoo!