Joan Swirsky
Is this a PANDEMIC or a DEMPANIC?

March 23, 2020
Now that we're in a de facto martial law mode – a shutdown of entire industries and small businesses, nighttime curfews, social isolation, a run on goods, huge sports events cancelled, a "shelter-in-place" mandate in California, releasing prisoners in New York (God forbid these miscreants get a flu!), Broadway gone dark, and a craven media inciting and delighting in the panic they're causing – it is relevant to ask: Of course, neither one of these Big Government hacks would be capable of such a feat. Thank God for the cool, calm, collected, and seasoned business mogul, President Donald J. Trump, who is guiding us through the coronavirus scare with decisive action and great success – with no less than 56 bold initiatives – and who not only brought us the greatest economy and employment record in the 243-year history of our country, but will revive it when this virus scare passes into history – shortly, I predict! 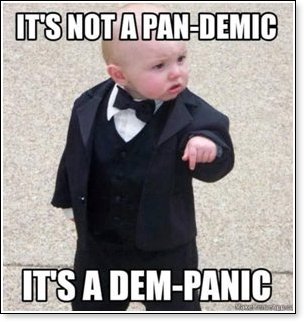 All praise to the brilliant graphic artist (above) who captured so perfectly what we are witnessing today – the last-gasp efforts of:
The views expressed by RenewAmerica columnists are their own and do not necessarily reflect the position of RenewAmerica or its affiliates.