Joan Swirsky
Who is really running the destroy-America Biden regime? 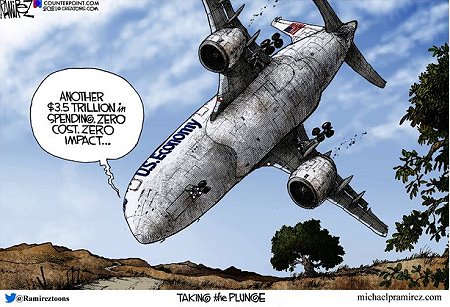 “Guilty as hell, free as a bird—America is a great country.” Bill Ayers, Weather Underground founder

“The main obstacle to a stable and just world order is the United States.” George Soros, hedge-fund billionaire

In today’s chaotic political landscape, it is obvious that the Democrat Party in power is comprised largely of far-left radicals, many of them shockingly anti-American and predictably anti-Semitic (as are all deranged leftists).

After all, with Barack Obama, they thought they were significantly closer to their 100-year goal of a socialist-cum-communist America, and believed that “President” Hillary would fulfill their cherished fantasy.

And then along came President Trump to smash that fantasy to smithereens.

When everything the Democrats tried in an effort to sabotage President Trump failed––the Russian hoax, the Ukraine hoax, the Stormy Daniels hoax, the impeachment fiascos, on and on––they pulled out the Wuhan lab surprise, effectively creating a pandemic.

The result was the entire world isolated in their homes, worldwide economies were destroyed, and the unprecedented phenomenon of mail-in ballots (along with the controversial Dominion voting machines) enabled the Democrats to fraudulently usurp the White House in the 2000 election.

Today, however, with audits being conducted in every significant state, that colossal voter fraud is being proven…stay tuned! And with the arrest of Hillary’s lawyer, Democrats are also looking at the coming arrests of all those higher-ups who colluded in the criminal anti-Trump effort, including Ms. Hillary herself!

THE FIRST EIGHT MONTHS AFTER THE FRAUDULENT ELECTION

In less time than a normal human pregnancy, putative president Biden managed to accomplish the following: 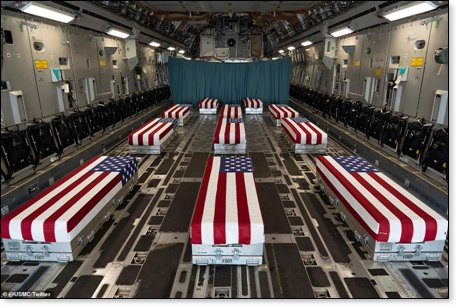 SO, WHO IS IN CHARGE OF THIS CATASTROPHE?

Is it Barack Obama? As writer Steve Weinstein spells out, Obama always had a lazy disregard for the tough work, and as we can see to this very day, is far more interested in displaying the conspicuous consumption that is part and parcel of his nouveau-riche persona than engaging in the gritty fray of politics.

Is it Susan Rice? For sure, a reliable functionary skilled to the nth degree at lying through her teeth, but with zero evidence of being a strategic thinker.

Is it Ron Klain? A clever guy, now Biden’s Chief of Staff, but more adept at managing a clearly diminished and doddering POTUS than orchestrating the complexities of an attempted coup d’état.

Is it Rahm Emanuel, Obama’s first Chief of Staff, or David Axelrod, the chief strategist of Obama’s two presidential campaigns? Clearly not, since neither was even invited to his lavish birthday party in August of 2021 at the Obama’s $15M waterfront mansion on Martha’s Vineyard––although Jay Z and Beyoncé were among other very important people who were invited.

Is it Valerie Jarrett, Obama’s longtime senior advisor? She certainly has the brains, ability to think strategically, and fidelity to leftist ideology. But she simply doesn’t have the burning hatred it requires to work so diligently for America’s downfall.

Is it Nancy Pelosi? Just the other day, the House Speaker twice referred to the president as Obama. Highly unlikely that this addled octogenarian is calling any shots! In fact, she can hardly cope with the far-left flank of her own party. But she was certainly not too addled a few weeks ago to meet with the guy (and his son) who bankrolls her agenda and tells her what to do, George Soros. 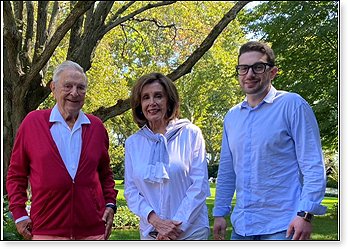 Is it Joe Biden himself? There are more than 330 million Americans who have eyes and ears to make that determination. In my opinion, not one of that massive number of people believes that the intellectually––and now cognitively––limited Joe Biden manages more than barely getting through the day.

Is it China’s leader, Xi Jinping, or Russia’s president, Vladimir Putin? It is certainly possible that they are colluding with each other against America, and even “speaking with” those who are directing things from the Oval Office. But both are too busy running their own massive countries to manage toppling a colossus like the U.S.A., especially when things are going so well in the direction they desire. 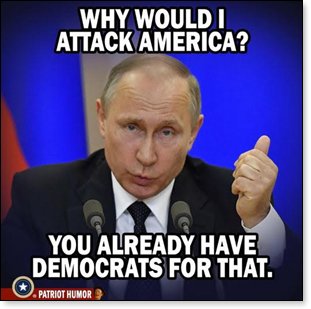 There are only two people, I believe, who qualify as possible candidates for choreographing the massive coup attempt currently taking place before our eyes. Both have spoken of their contempt ––if not searing hatred––for America, and both have tried mightily over decades to bring down our country. And, most important, both have the brains and power and track records to place them in frontrunner contention.

The first is Bill Ayers, now 76 and a retired professor of education at the University of Illinois at Chicago. Ayers gained early fame when he founded the Weather Underground, a self-described communist revolutionary group that sought to overthrow America and conducted a campaign of bombing public buildings (including police stations, the U.S. Capitol, and the Pentagon) during the 1960s and 1970s.

In an early eighties interview, Ayers remembered his reaction upon learning that because of government overreach, he would not be prosecuted for a Weather Underground bombing spree that killed a policeman. “Guilty as hell, free as a bird—America is a great country,” he exulted.

After that, he joined his version of mainstream society as a professor, but was far from through with far-left politics.

In 1995, when Barack Obama was running for state senator in Illinois, Ayers held a fundraiser in his living room––while both insisted they only knew each other casually. In fact, their cozy relationship had been public knowledge in Chicago for years.

And when prolific journalist and author Jack Cashill wrote Deconstructing Obama—based on his exquisite forensic analysis of Ayers’ former writings––he made an airtight case that it was Ayers who actually wrote Obama’s two bestsellers: Dreams of My Father and The Audacity of Hope.

According to blogger Bernie Quiqley, Obama and Bill Ayers were "together from the beginning" [of Obama’s political career]. When Obama met with Ayers at “the salon gatherings of Chicago’s Beautiful People,” he added, “it was the kickoff of a political career which would lead, potentially, in little over a decade, from the house of the most notorious of the violent Amerika-hating revolutionaries from the ’60s still alive, Bill Ayers and [his wife and fellow terrorist] Bernadine Dohrn, to the White House.”

In fact, Quigley writes, between 1995 and 1999, Obama led the Chicago Annenberg Challenge (CAC) that Ayers founded––“a program that called for infusing students and their parents with a radical political commitment, and which downplayed achievement tests in favor of activism.’

So, what is Bill Ayers doing now? For one thing, lamenting on his blog the deaths of his fellow terrorists. And last year, upon observing the violence and destruction wrought by Antifa and Black Lives Matter in Portland and Kenosha, he remarked: “Am I the only one, or do you feel eerily that we’re living in Kansas, 1859 ––[when Kansans engaged in a violent guerrilla war between pro-slavery and anti-slavery forces which contributed to the coming Civil War]––and that tensions are boiling over, but only years later will people say, ‘Yes, the Civil War began there and then?'”

Clearly not through with politics, is Ayers now whispering into the ears of Joe Biden’s handlers exactly what to do to bring down America? He certainly seems a viable candidate to me.

The second––and most likely––candidate is George Soros, now 91, the still active and vital hedge-fund billionaire whose brilliance is undisputed, whose political involvement and effectiveness in world affairs is second to none, who is considered both indispensable and formidable to his fans and terrifying to his adversaries, and whose financial resources are seemingly unlimited.

In a 2018, the editors at David Horowitz's Discover the Networks wrote an exhaustive, riveting, must-read study of Soros entitled: Who is George Soros and Why He Hates America. I urge everyone to read this article because it demonstrates the passion, the ideology, and––as the crime shows emphasize—the means, motives, and opportunity, with which George Soros has poured his heart and soul and massive amounts of money into transforming America from a democratic republic to one that fulfills the ideals of his Open Society Foundations (OSF), founded in 1993. Those ideals are:

The breadth, depth––the sheer magnitude––of what Soros has accomplished, worldwide, since he got deeply involved in politics in the mid-1980s, is breathtaking. “My spending rose from $3 million in 1987 to more than $300 million a year by 1992,” he said.

Imagine what it is today! 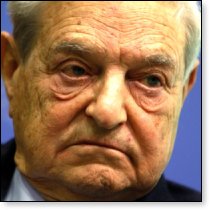 The above-cited article called Soros “one of the most politically powerful individuals on earth. Since the mid-1980s, he has used his immense influence to help reconfigure the political landscapes of several countries around the world—in some cases playing a key role in toppling regimes that had held the reins of government for years, even decades.” Not to omit that, famously, Soros broke the bank of England, raking in more than a billion bucks in the deal.

Vis à vis the United States, a strong case can be made for the claim “that Soros today affects American politics and culture more profoundly that any other living person.”

As of 2018, the OSF’s total assets exceeded $1.9 billion. Each year, the Foundations award scores of millions of dollars in grants to over 206 U.S. organizations, which, among other things:

Among the central political ideas that unite Democrats––and certainly energize whoever is running the show––is the Cloward-Piven Strategy. The founders of this plan, which began in 1966 and is flourishing to this day, were both from Columbia University, loathed America, and insisted that capitalism could be collapsed by overloading the government with financial demands that could never be met.

Or as writer Jeff M. Lewis explains in "They Intend to Destroy America," the plan is to “overload the American public welfare system and create a crisis that will bankrupt the nation, leaving no choice but to adopt a socialist/communist system of government.“

Cloward and Piven also formed voter-fraud schemes like Project Vote, ACORN, etc., still extant but only with different names. And surprise, surprise––ACORN’s lawyer was none other than Barack Obama. Birds of a feather, and all that.

Their vision is exactly what we are witnessing today with the mad rush of hundreds of thousands of illegal aliens pouring over our southern borders and being secretly ferreted to American cities, all with the promise of free everything––food, housing, medical care, education, even drivers’ licenses! And all with the implicit directive to Vote Democrat!

At the same time, we have the discredited “expert” on all things coronavirus, Dr. Anthony Fauci, insisting on what Sen. Ron Johnson (R-WI) calls the “totalitarian biomedical security state of forced vaccination.” 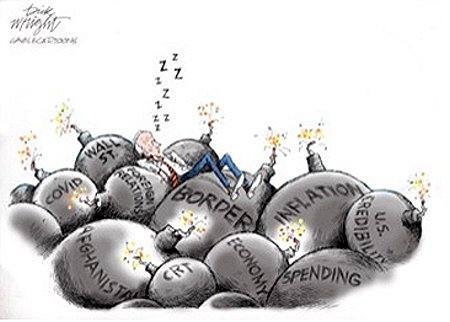 Ruth S. King––writer, editor, and international blogger––sees in this not only a coup, but an authentic insurrection: “When the established government does not recognize dissidents and calls them “domestic terrorists” and limits their speech, controls the media, alters the language, denies legitimate history, trashes tradition and culture, erases national borders, blurs the role of the military, destroys the canons of education, science, and medicine, and uses the powers of government to spy on its citizens—that is an insurrection.”

And who is orchestrating this last-gasp attempt of the Left? Isn’t it obvious?